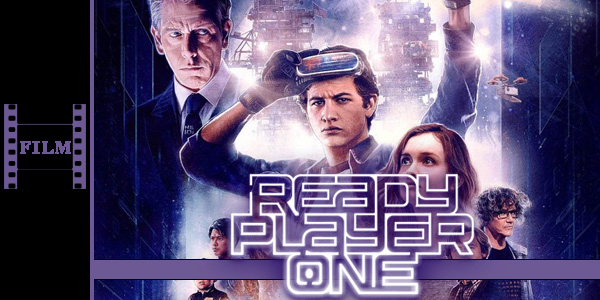 Ready Player One has the personal distinction of being the first film I’ve ever watched where I had read the book first (well, listened to the unabridged audiobook…) Due to this I did find myself thinking back to the original and how so much was cut and rearranged, something I’m sure many more people have done to many more films in the past, but overall I really enjoyed myself. It may not be as detailed (obviously) or as… 80s as the book, but it was certainly a fun celebration of the crazy amount of pop culture we’ve amassed over the past 50 years, and in general a fun story to follow. Let’s take a closer look then!

The year is 2045, and the world is on the brink of chaos and collapse. But the people have found salvation in the OASIS, an expansive virtual reality universe created by the brilliant and eccentric James Halliday. When Halliday dies, he leaves his immense fortune to the first person to find a digital Easter egg he has hidden somewhere in the OASIS, sparking a contest that grips the entire world. When a self-confessed Halliday nerd named Wade Watts joins the contest, he is hurled into a breakneck, reality-bending treasure hunt through a fantastical universe of mystery, discovery and danger, both in the OASIS and the real world…

Aech and Parzival in the real world… I think… no wait, in OASIS. Sorry.

Wade Watts / Parzival (Tye Sheridan) – Wade lives with his uncaring aunt and her endless string of abusive boyfriends, sneaking out to his hideout to enter his only escape from this harsh reality: the OASIS. Wade is a high-level player called Parzival and a die-hard Halliday fan with dreams of winning the big prize…

Samantha Cook / Art3mis (Olivia Cooke) – Art3mis is a legend among the Gunters, or egg hunters. In reality Samantha’s family was destroyed by the overly harsh methods of IOI, meaning she doesn’t want the egg and the fortune for herself as much as she wants to make sure they don’t get it.

Helen Harris / Aech (Lena Waithe) – Aech is a top OASIS in-game engineer and the best friend of Wade / Parzival. His biggest secret is that in the real world, he is a she…

Nolan Sorrento (Ben Mandelsohn) – Nolan was once an understudy of Halliday and Morrow, but wasn’t treated well by them due to his focus on monetising the OASIS over having it be fun. Now he owns the second biggest company in the world, IOI, and will stop at nothing to gain control over the OASIS via the egg hunt and become number 1.

James Halliday / Anorak (Mark Rylance) – Halliday is your classic shut-in nerd who happened to be brilliant. He created the OASIS and ran it up to his death. His major falling out with his partner Morrow and his lack of courage to ask his friend’s future wife out still haunted him until his final days…

i-R0k (TJ Miller) – A top OASIS player who gladly hires himself out to IOI if it means getting his hands on more money and high-level loot.

Daito / Toshiro & Sho / Zhou (Win Morisaki & Philip Zhao) – A team of top Gunters who are friends with Aech, and therefore with Parzival. Sho in reality is only 11, but you wouldn’t know that given his skill… Yep, that sounds like an online game to me…

Ogden Morrow / Curator (Simon Pegg) – Morrow was the partner of Halliday and co-created the OASIS with him. The two had a major falling out that lead to them splitting, but both came to regret that, though never got the chance to make up…

Mecha Godzilla and the original Gundam battle in front of Parzival and Art3mis… that’s a weird sentence to write!

I guess first thing to mention is how great it looks. The scenes inside the OASIS are entirely CGI, but given its supposed to be an entirely digital world, a living computer game, it was fitting, and really good! Aside from playing spot the cameos, which would take literally forever, there were still plenty of important scenes from the book that were kept and well realised, especially the grand finale battle which managed to still include Mecha Godzilla being attacked by the original Gundam, which must have been a licensing nightmare (absent is Ultraman, which I guess actually was a licensing nightmare…) Anyway, the important thing was they got the feel of unpleasant dystopia into amazing digital world perfectly. You don’t blame these people at all for wanting to spent all their time there.

Although a lot of it has obviously had to be condensed, the central relationship between Wade and Sam, or Parzival and Art3mas, is well served here. Both are great portrayals of the original characters and get your sympathy in the classic young’uns going up against the faceless businessmen adults story, as well as a story of young love. The scene where they … anti-gravity dance in the OASIS club was really sweet, and you really felt the two of them enjoying their time together. The fact they meet and interact in the real world so quickly is quite the departure, but it certainly doesn’t take away from their story.

Nolan Sorrento and the IOI are full on cartoon “evil businessmen” here, stomping on everything people find fun and trying to turn it into a way to make money. In the real world they’re literally putting people into debt and then sticking them in cubes with OASIS headsets and getting them to work to near death (or actual death, in the case of Samantha’s dad). IOI destroying Parzival’s “stack” (literally mobile homes stacked on top of each other) with explosives because they have the power and influence for nobody to give a damn was well done, and added more hatred towards out central antagonist. By the end of the film we get the pleasure of seeing his OASIS avatar get pummelled (and hadoken’d!) and then we see his real world self get arrested, it was so… satisfying! The fact he hesitated to shoot an unarmed kid in front of a large group of people because said kid was crying at the sight of the famed Easter egg was probably not as nice as it was written, I wasn’t sure if he felt something for the kid, or just had some sense about blatantly not being able to get away with it… (okay, he clearly has a mild change of heart, but the framing amused me…)

As for the central plot of the Easter egg hunt and the legacy of Halliday and Morrow, it was again condensed as it had to be, but didn’t lose the central idea of Halliday regretting his lost opportunities in the real world, and the lost of his friendship. The three keys and the challenges to get them were changed a lot, mostly by not having a second or third challenge surrounding the gates, but I wasn’t expecting to see Wade beat Joust or recite scenes from War Games in the middle of a two hour film. I did like how the final challenge was still finding the original Easter egg in Adventure on the Atari 2600, the scene of a single CRT TV with an Atari underneath it in the middle of an ice-filled cavern under an imposing castle was great, and a fun contrast to the 1001 pop culture reference army doing battle with IOI outside the structure.

Other characters, like Aech, Daito and Sho, were good too. Aech lived up to her book version, and the other two were… well, pretty generic, but at least they both lived this time! They weren’t travelling around in the Bebop, but then none of the spaceship scenes or planet hopping scenes were in the film anyway, and as I previously mentioned, they still used the original RX-78 Gundam, so I’m happy.

The second key being changed to a faithful recreation of The Shining film was odd, but definitely fun. I’m not a horror guy by I love the film, and appreciated the odd realistic feel the recreation gave off, despite five CG characters walking around in it. Oh and changing i-R0k from nerdy school mate to bounty hunter for hire on the IOI payroll was fine, as he still kept his embarrassing nerdy-ness, and had some fun scenes.

The Iron Giant was all over the promotional work for the film but, is he really that iconic? More so in the west than Gundam, don’t get me wrong, but still…

The one thing I didn’t like about the book was the ending, I felt after having a whole book celebrating pop culture and how its brought people together and let them have fun, that to have the final line be, roughly, “I kissed a girl in real life and now I never want to go back to that again” was a low blow to the key audience that was reading it. In the film? A little bit different, Wade doesn’t gain ultra admin powers that allows him to do anything in the OASIS, and he keeps everything going as normal apart from closing the OASIS down two days a week… but, the thing is, he’s now ultra-super-mega rich, and has a sweet apartment with his new girlfriend, so saying “this will allow you to live in the real world and have fun like me!” is all well and good for you, but what about the millions who live in squalor and have literally nothing?

You’re telling them to sit in their smelly room or in slums for a day because living in a swanky apartment with your hot girlfriend is as great as the OASIS? Great… talk about forgetting where you came from! What about the kids in the stacks who are being beaten by their parents, what are they going to do to escape? Halliday regrets some actions not taken, fair enough, and I’m not saying in real life spending all day in fantasy instead of going outside is the right thing to do, but it was just that final shot of him in a big apartment with his hot girlfriend on his lap that just… I don’t know, didn’t feel right. It was supposed to be an uplifting “things will change with this move” moment, but I just don’t think it would! It would just make the dystopian nightmare more nightmarish for millions of people while he looks down on them from his swanky flat.

That’s it really, though. They managed to cut the book down while still keeping it as much of a fun ride, just quicker. They changed it so the team come together straight away rather be loners until the very end, but it still keeps the feel of fun and free vs. cold, joyless business battle.

Wait, Halliday played as Oddjob in Goldeneye?! Cheating twat, now I’ve lost all respect for him…

While I didn’t like the ending minute, I love the other 200+, so I definitely recommend you see Ready Player One. As a man in his 30s, I might find more enjoyment out of it than someone who is currently in his or her teens, but I still think the heart of the film and the special effects will keep your attention. It’s a fun thrill ride, and has a good message at its core (even if that message is slightly jumbled by the way its delivered at the end…)