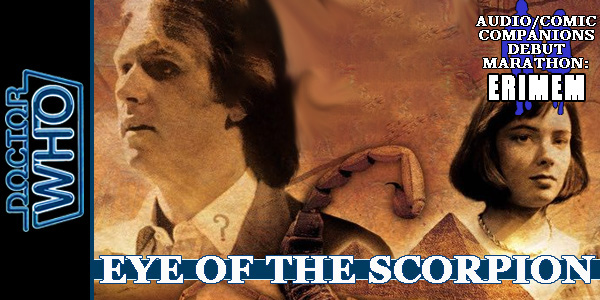 Eye of the Scorpion introduces us to Erimem, the should-be Pharaoh who ends up travelling with The Doctor and Peri (yes, the Fifth Doctor and Peri, which is a rare combo nowadays!) It’s also very nearly a pure historical, though the run of Doctor/Peri/Erimem has several actual pure historicals, so if anything it having a sci-fi element in its plot is more note worthy… Anyway, let’s have a look at Eye of the Scorpion then, shall we?

1400 BC. Egypt is in mourning. Pharaoh, the great God-King, is dead. The future of the Two Kingdoms of Egypt is shrouded in uncertainty as the Council of Priests debates the claim to the throne of Pharaoh’s only heir.

Out in the deserts around Thebes, Egypt’s capital, a warlord chief is assembling an army of mercenaries, waiting for just the right moment to strike at Egypt’s heart.

But not all of Egypt’s enemies are outside the city. What is the secret of the strange box discovered in the desert?

When the TARDIS arrives nearby, it has apparently been hijacked… by the Doctor?

A nice, simple cover, though the scorpion is a bit on the nose…

The Doctor (Peter Davison) – The Doctor is enjoying taking Peri around time and space, it’s very rare for this incarnation to have just one companion. When the TARDIS is pulled down to ancient Egypt though, that might end up changing…

Peri (Nicola Bryant) – Peri is still new to the sights of time and space in the TARDIS, but she’s a master of technology compared to her soon-to-be friend…

Erimem (Caroline Morris) – She is next in line to be Pharaoh, but the idea of a female Pharaoh doesn’t appeal to many members of the Egyptian council…

Antranak (Jonathan Owen) – Antranak is Erimem’s close friend, trusted ally and advisor. He is weary of strangers, and will fight anyone who will deny Erimem her heritage.

Horemshep (Stephen Perring) – A regular member of the Egyptian hierarchy… until he found an old alien stasis box containing a being of pure thought. Now, not so regular.

Yanis (Harry Myers) – The most insanely one-dimensionally cruel man you’ll ever meet. If he’s not whipping you, he’s shouting at you… if you’re extra lucky you’ll get both!

Fayum (Jack Galagher) – A priest loyal to Erimem and Antranak, though his honest and naïve nature could end up costing everyone…

Some fun artwork from Doctor Who Magazine.

The setting of ancient Egypt is a good one, somewhat weird it was never really touched on in the TV series (beyond an episode or two of Dalek’s Masterplan), but it’s especially interesting making a would be Pharaoh a companion. Apparently it was a last minute decision, much like other historical companion Jamie in the TV series, but it works well, especially alongside a very modern Peri. Episode 2 is Doctor-less, which I normally bemoan because it used to happen in the old historicals (and show in general), but that was a necessity due to the relentless schedule, so there is no need to do it intentionally for “fun reference”. BUT in this case Episode 2 was really good regardless, and that’s all to do with Peri and Erimem’s chemistry.

Most of the guest cast is good here as well, Erimem’s trusted friend Anranak is a good, stern-voiced advisor type, and various scheming priests, assassins and concubines, all that “of-the-period” stuff was well represented. I enjoyed a scene where Peri is shocked at the naked dancing ladies, while The Doctor just sort of, brushes it off “But they’re naked!”  “Oh yes, so they are…” Peri’s misunderstanding of the times were well done, those kinds of jokes can easily become cliché and predictable, but these were funny, for the most part.

There is a court scene that I believe is the longest single scene / track in Big Finish history, and it’s really good! I’m not the biggest fan of court drama, but this really works, so hats off for all those involved.

Chariot chases, armies attacking cities, travelling between ancient Egyptian cities, this is certainly more active than the old Hartnell historicals, that’s for sure! It’s the benefit of an “unlimited budget” on audio, so long as you have the right sound effects…

The villainous Yanis is a bit too villainous. His actor, Harry Myers, over-eggs it to the point of proper scenery chewing, and it ended up making me smirk or flat out laugh every time he had a scene, which is assume is the opposite of what was intended…

I didn’t really feel the sci-fi part was needed, and from forum posts by the writer (Ian McLaughlin) it wasn’t really intended, he felt pressured to take it in a non-pure historical route due to it being his first script. It doesn’t ruin the story, due to the alien’s nature of being purely thought-based / telekinetic it doesn’t take away from the atmosphere, but I thought I’d mention it.

A beautiful piece of fan artwork for the story.

With the exception of a few references to Peri’s introduction story “Planet of Fire” and a single line by The Doctor saying he was “at a bash they threw for Nero once” being a reference to First Doctor TV story “The Romans”, not much! Given it’s set in ancient Egypt, I was surprised there was no mention of Egyptian God-based race the Osirans, but there you go! Never came up in The Doctor’s conversations, I guess.

The Eye of the Scorpion is a really fun historical story with a bit of a sci-fi twist that doesn’t really effect the fun of the setting. Erimem makes a good first impression and plays off of Peri really well, setting up a great trio for stories to come, and I can’t think of higher praise for a companion introduction story. A few niggling things bring it down from perfect, but it’s damn fine 2 hours of audio drama.