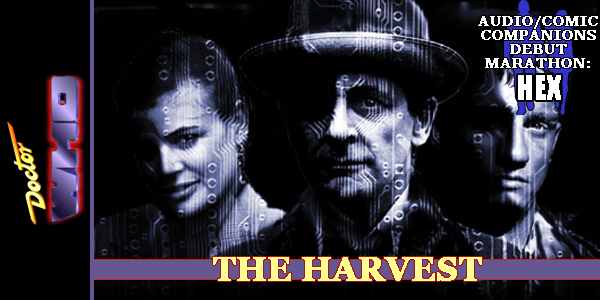 The audio / comic companion intro marathon reaches Hex, one of the best original companions who, along with Evelyn for the Sixth Doctor and Charley for the Eighth, form a trio of great audio only companions during the 2000s / early 2010s for Big Finish. Hex’s arc is long and somewhat complicated, but it’s extremely fun (well, apart from the final trilogy of stories…) so I’m looking forward to one day running through them all again. Anyway! Hex’s debut story, The Harvest, is a great, tense story with the Cybermen being used in a really clever way. Let’s have a closer look!

On the morning of October 12th, 2021 Hex woke up. He was expecting to go to work at St Gart’s in London as normal and, that evening, have a great time in the bar of the White Rabbit, celebrating his 23rd birthday.

But after his ex-flatmate is wheeled into A&E following a bike accident, and the strange young woman from Human Resources tries to chat him up and an eight-foot tall guy in a Merc tries to run him down, Hex realises things are not going quite as he expected.
Then in a Shoreditch car park he meets the enigmatic Doctor who explains that he’s an extra-terrestrial investigator and something very strange is going on up on the thirty-first floor of St Garts.

Therefore, aided and abetted by the Doctor and his other new friend ‘Just McShane’, Hex decides to investigate. Trouble is, everything that goes on at the hospital is being observed and noted by the occupants of the thirty-first floor. Occupants who are none too pleased that people are poking their noses into business that doesn’t concern them. Occupants who will go to extraordinary lengths to ensure that no one discovers the truth.

The Doctor (Sylvester McCoy) – The Doctor and Ace are going undercover at the mysteriously high-tech St. Garts Hospital, with The Doctor playing the part of the cleaner, but really he’s slowly hacking his way into the hospital computer…

Ace / McShane (Sophie Aldred) – Ace, still going through her “just McShane” phase, is working at St. Garts as a member of human resources, which even for undercover work to discover a potentially serious threat is quite extreme punishment for such an easily excited person such as herself…

Subject One (William Boyde) – Tall, partially cyber-converted individual… or is he? Maybe it’s the other way round…

Doctor Farrer (Richard Derrington) – Top surgeon and all round brilliant star of St. Garts hospital, he has had some rather… unusual patients up on the 31st floor that are getting harder and harder to please…

Doctor Mathias (Paul Lacoux) – Mathias is a bit of a joker, bit of a, well, twat, but the kind of thinks-he’s-funny twat that’s sort of fun to be around…? Well, anyway, Hex knows him as he works in the same department as he does.

System (Janie Booth) – The A.I. that controls St. Garts. It has several bits of technology inside it, from human to Cyberman to even a bit of Time Lord… A simple but extremely effective cover!

Given the fact that the Seventh Doctor started off with Mel and that Ace sort invited herself along for the ride (well, so she thought) what was really nice was Hex’s first scene in the TARDIS, where The Doctor gives him the rundown and resists taking him on board at first. It’s a unique (at that point) experience, and their interactions are great, particularly The Doctor making fun of him for saying “oh my God” over and over.

The trio have instant chemistry, and by the end of it you really feel like they’re a team. The unique dynamic of Ace having a protégé in Hex rather than The Doctor is fun, and it builds nicely going forward into an older sister / little brother relationship.

As for the rest of the story, it’s a very interesting idea. Some Cybermen are discovered, badly injured, and they agree to a deal where they are de-cyberised back into humans by top surgeon Dr. Farrer in exchange for the secret of Cyberising technology for the country’s military and security purposes. You hear a former Cyber Leader with a human voice talking about experiencing emotions for the first time, and being interested in things like pain, fear and joy. Really it’s a shame he turns out to be still evil in the end, it would have been a more interesting twist if the humanisation had at least partially worked. Still, some great scenes throughout the story, and it ends with The Doctor coldly watching the Cyber Leader die via organ failure, which sounds out of character, but it is the Seventh after all…

The middle of the story has a lot of Ace, Hex and Hex’s annoying friend Dr. Mathias being hunted in the closed off hospital by the new human Cybermen. It’s effective drama, even though Mathias sounds like Colin Hunt from the Fast Show (which has to be intentional given he’s an obnoxious work colleague) and when Dr. Farrer finally gives in and puts his foot down to stop harvesting the organs of the near dead visitors to the hospital and dies for it, that’s also a great scene. Really, the whole story is just an effectively written sci-fi drama that also serves as a great debut story for Hex…

With the possible exception of the end turning out the Cyber Leader was in control of the Cybermen all along and he’s still evil being a bit of a downer, there isn’t much to complain about here. At all. This was my second time listening to it and I was just as gripped as I was the first time round. Brilliant stuff.. 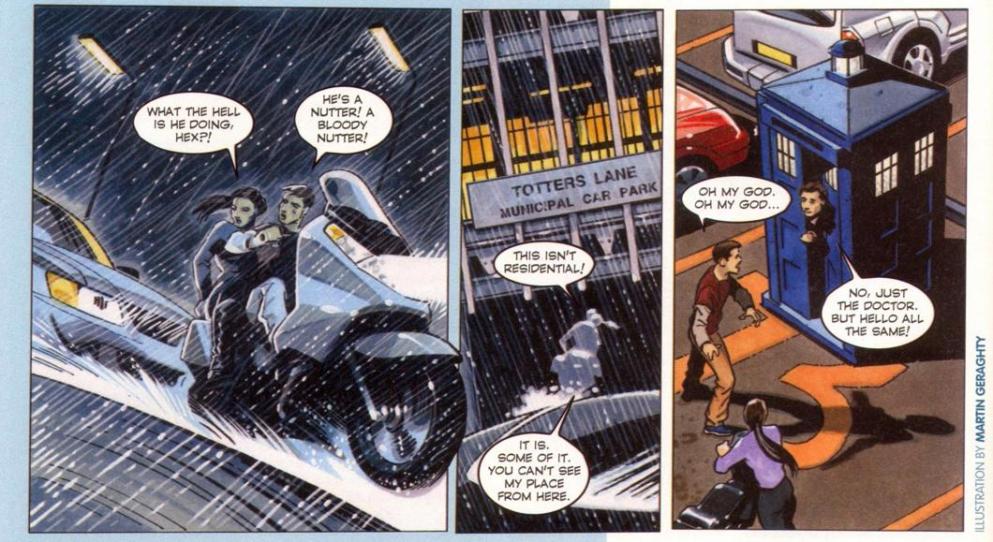 Hex’s origin is lightly hinted at here, but I’ll wait for the relevant revelation during a later story to explain that continuity, otherwise I’d have to post it on every Hex audio review! 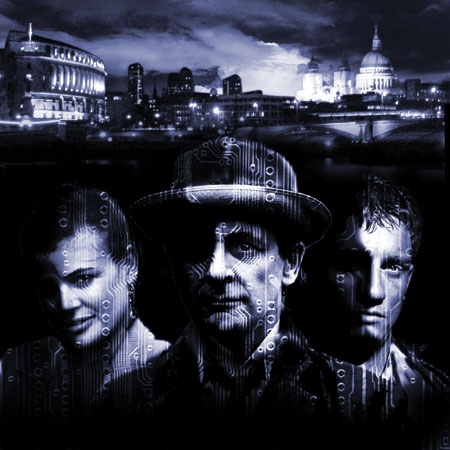 The textless cover art, because… why not?

The Harvest is a great story, brilliantly written and acted, full of drama and action, and does a great job of introducing the Who world to Hex. It’s funny that when I think of my favourite Audio Dramas this never came into my head, but listening back to it, it deserves to be highly praised indeed. A must own, and not just because of the significance of Hex’s debut.