Thanks to Ravenous 2 doing a two part story in the middle of the box, I’ve had to split it into three rather than the usual two, which is mildly annoying… Anyway! What isn’t mildly annoying is a fun story set on Kaldor itself, even if it lacks the kind of imagination I associate with the planet. Plus it adds several layers onto Liv Chenka, which is a nice bonus! Let’s take a closer look…

Returning to a home world she’d rather forget, Liv reluctantly accompanies Helen to the grand opening of a luxury shopping mall. But when a glitch in the system sends the Robots of Death on a rampage, Liv’s past comes crashing down about her.

The Doctor (Paul McGann) – The Doctor is finally getting to enjoy himself again, free from universal threats and worries. While on this high he’s decided to try and help his long-term companion Liv with her home life, whether she wants to or not…

Liv Chenka (Nicola Walker) – Liv is back on Kaldor, and she’s… not particularly happy about it. Bad memories are the only thing she associates with her home world, and things haven’t got any better since she left…

Helen Sinclair (Hattie Morahan) – Helen is happy to be back with The Doctor and getting to relax a bit, plus after several trips to London, it’s nice for the shoe to be on the other foot and have her see Liv’s home instead… Nice for now, anyway…

Tula Chenka (Claire Rushbrook) – Tula is Liv’s sister who, after spending her Dad’s funeral at work, has created a divide between the two of them. Still, her work with robotics is important! We all know that a gathering of Voc Robots while The Doctor is around is always a good thing!

Kit Laver (Richard Popple) – A member of one of the 20 big families that pretty much run Kaldor, Kit hasn’t ever needed anything in life. Still, the idea and thrill of a robbery might at least give him some entertainment…

The Voc Robots (Claire Rushbrook, John Dorney, and others) – Created only to serve humanity, the Voc Robots have had a few… incidents recently. Still, they’ve been covered up, so let’s just keep surrounding all of humanity with them! Why not!? 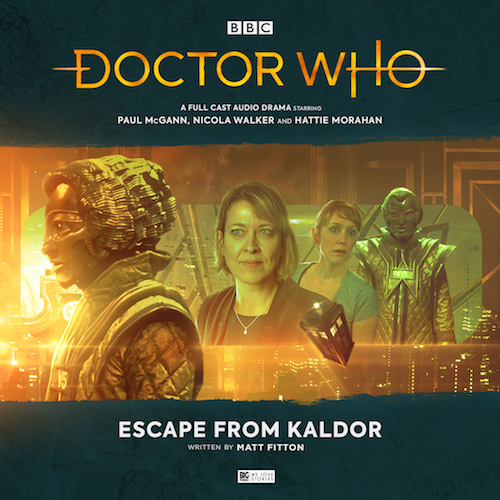 Why does Helen always look panicked on these boxsets? Did they only take one picture of Hattie Morahan or something?

Essentially this is Dawn of the Dead with Voc Robots instead of zombies, right down to the shopping mall setting. It’s a fun concept, and given it’s just the background to what is the true purpose of the story, slapping on multiple layers to Liv Chenka after all these years, that’s fine. It has some fun sneaking around moments with Liv, Helen, rich twat Kit and eventually Liv’s sister Tula, and it all thankfully leads to a satisfying moment where Kit is killed despite his status as a rich higher-up. The Doctor of course saves the day when the head of the corporation that creates the robots tries to detonate them and level the mall to cover up the story, but The Doctor manages to counteract the order by telling them that innocent lives will be lost, which goes against their core directive. This sort-of backfires when the scenes of Voc Robots helping men, women and children out of the mall goes viral and actually increases the reputation of the corp. rather than harms it, but hey-ho. No one died. Well, many people died actually… fewer people died. There.

Tula is a fun character, she has hints of Liv’s sarcasm, but is very much her own woman, and being at the head of robotics, she’s a little bit shady as well. The reveal that she’s Liv’s sister is brilliant, The Doctor asks her to look on her screens for his friends, and when she sees one her his friends is Liv she says something along the lines of “but that’s Liv. You know she’s my sister right?” and the Doctor excitedly replies “Yes! It’s great isn’t it?” As if he’s excited at his own created plot twist, or is generally really happy to speak to another member of Liv’s family.

It has a really unique final few scenes that were really interesting. Liv feels she wants to stay and reconnect with her sister after they hammered a few old grudges out during the drama, but she also wants to continue to travel. Helen asks why she can’t do both and says that she’ll make sure The Doctor returns to this exact point one year from now to pick her back up. Sure enough we jump one year forward, but are greeted with the sound of sirens and destruction, with Liv happily gloating that something major has happened to her planet, before swiftly rejoining The Doctor and Helen. She soon waves any questions off by saying everything was fine as she hurried everyone into the TARDIS to leave. It will be interesting to see what she’s done, and why she wanted to leave, and I also find it hard to believe that The Doctor and Helen didn’t do something before picking her up again…

My only issue is that after the crazily-dressed people of the original Sandminer from Robots of Death, and then subsequent stories with the Kaldor people, I imaged the planet was quite alien to us, beyond what the people look like. So to finally get a story set on Kaldor only for it to be about shopping malls and big businesses making money at the expense of the little people…it just sounded like Earth. Earth with some robots milling around. I guess it was better left to my imagination! 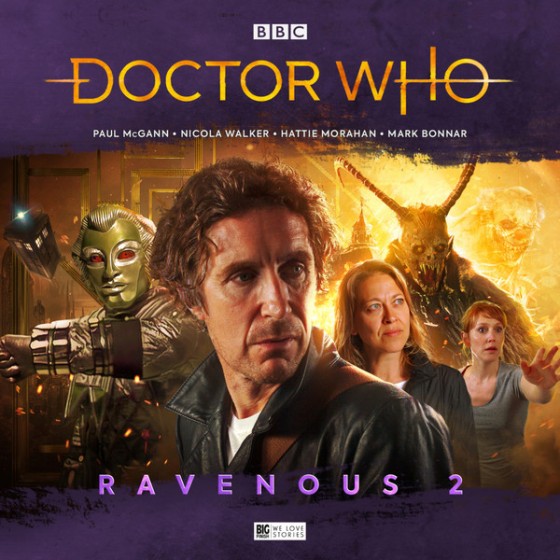 Plenty of hints at what’s to come!

Obviously both the Fourth Doctor TV classic “Robots of Death”, and Liv Chenka’s debut story “Robophobia” are both mentioned several times, but apart from that and a few mentions of Helen’s time with the Sonomancer during the Doom Coalition storyline, that was it for continuity really, ignoring it leads into the next story in the set, obviously! It more about building new stories with Liv than it was about looking backwards.

Escape From Kaldor finally delves deep into Liv’s past and makes her a more interesting character for it, while also doing a fun parody of Dawn of the Dead at the same time. The ending not only tied up everything well, but it also teased a new secret that Liv will no doubt shockingly reveal down the line, making sure the character stays interesting after having so much of her thoroughly explored. With the exception of a boring idea of what Kaldor was like, it’s a great start to the set, especially for only being an hour long.