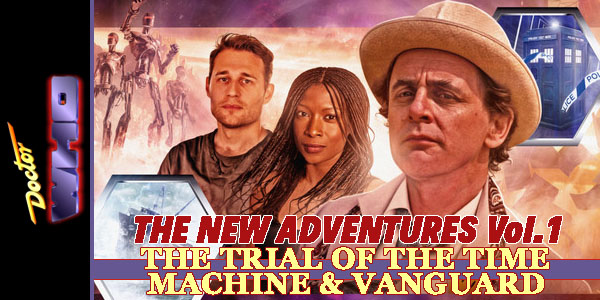 The first volume of the “New Adventures” has arrived! What are they? Well, they’re new stories for the Seventh Doctor and his companions Chris and Roz from the New Adventures books and their relevant audio adaptations. So… new New Adventures, I guess. Either way, I did enjoy Roz and Chris in the aforementioned book adaptations, and if the first two stories are anything to go by, I’ll enjoy these small slices of that era too…

Official Synopsis (of Episode 1 “The Trial of a Time Machine”):

After colliding with another time-ship in the vortex, the TARDIS materialises on Thrantas where it is arrested and forced to face trial. While Chris and Roz investigate the crime scene, the Doctor must defend his most loyal companion against a society where guilt has no meaning.

The planet Vanguard was once ravaged by a war between its peoples: the Dauntless and the Intrepid. Now, robotic titans stalk the desolation, searching for survivors. Their mission: to end the war for one side or the other. But which side will the Doctor take?

The Doctor (Sylvester McCoy) – The Doctor is no stranger to his TARDIS being a bit bumpy, but after a collision with another time machine he is worried about its safety… even more so when he steps out onto the planet…

Roz Forrester (Yasmin Bannerman) – Roz is enjoying her time with The Doctor, though when she arrives on Thrantas and begins to help two local officers with an investigation, she soon finds it uncomfortable… especially as she’s one of the suspects!

Chris Cwej (Travis Oliver) – Chris is enjoying an opportunity to flex his old Adjudicator muscles by investigating the ship The Doctor crashed them into, though he may soon overstep his bounds…

Maratuk and Sydyck (Liz Sutherland-Lim and Vikash Bhai) – A pair of Thrantas law enforcers not unlike Roz and Chris from back in the day. They’re used to a the unusual method of law on their planet, but that doesn’t mean they both feel it’s fair…

Honos (John Heffernan) – Honos has been in charge of the Thrantas court for some time, never questioning the judgment of their mysterious central processor>?

Contessa (Sara Powell) – Contessa fought in the war between the Dauntless and the Intrepid, and was responsible for the virus that killed pretty much the entire population of her planet. Now she just wishes to flee, to not be alone any more… at any cost.

Green (Olivia Morris) – Green is a member of a small group of once-children who survived the war on Vanguard, though they don’t know why. Supplies are running low, and so Green has taken it upon herself to call for help, even if it may draw unwanted attention…

Blue (Connor Calland) – Blue is also a member of the survivors, but was adamantly against calling for help as it puts their whole group in direct danger…

Nice cover, it’s a shame there’s only one for the whole set! *grumble grumble*.

The New Adventures books have a reputation for being more “adult” that the TV series, which is very true from what I know (I haven’t actually read them, mind) but this isn’t just from a violence or sex perspective, but from a more straight sci-fi stance as well, and while there isn’t any more violence or sex than any other Big Finish audio, these two do share a common theme in feeling like they’re catering to an older audience. “The Trial of a Time Machine” has a focus on world building an odd society and has an interesting ending that lacks the usual explosive finale a lot of other stories would have, and “Vanguard” has the feel of a 90s 2000 AD strip, with a post-apocalyptic world full of killer robots with cheesy voices and smirk-inducing dialogue, plus quite a bit of unpleasant things befalling our lead trio. So, what I’m trying to say, it that so far this boxset feels like it has at least earned the title of “New Adventures” beyond using Chris and Roz, even if the stories themselves lack the large cast and more intimate world building afforded by the novels.

“The Trial of a Time Machine” sees The Doctor and co. accidentally knock into a time-craft that was going to land on the planet Thrantas, sending it into the future and killing all but six passengers. Thanks to the law of the planet, the TARDIS is arrested due to having a form of sentience, and put on trial, with The Doctor acting as its interpreter. Meanwhile Chris and Roz tag along with two on-planet cops to search the wreckage of the time-craft for survivors. This is where we hear the odd laws of the planet, specifically that thanks to having a head judge that’s a machine (or so we believe…) that can see into the past, present and future, any crime is punishable only by how much of  a negative effect it has on society after the fact.

It’s close to Minority Report, but not quite. A good example is given when Sydyck reveals that he once knew someone was guilty so planted evidence to arrest them, but got caught out by his partner Maratuk. Sydyck got off Scott free because his getting that person arrested had no negative effect of society, while Maratuk’s getting in the way lead to the person getting off, so she was punished. It’s a hard one to you head around, but interesting… Anyway, it turns out this computer was actually the last of a peaceful race that once oversaw the people of Thrantas hooked up to a machine that attached it to the past and future, so of course The Doctor sets it free and tells the Thrantasians (?) that they’ll have to come up with their own judicial system now. It’s a good hour of sci-fi, really.

“Vanguard” is also a fun hour. As I said in the top paragraph it has an old pulpy 80s/90s sci-fi about it with pretty much the entire race of the planet having been wiped out, leaving behind only their armies of deep, electronic voiced robot soldiers. The Doctor, Chris and Roz are all infected with a programmable virus that had previously killed 99% of people on the planet, and to top it off Chris is caught in a rockslide and is left with life-threatening injuries. He is found by the heartless Contessa who is just going to leave him to die until one of her robots spies his “time craft” and she realises he might be able to get her out of here. She uses the same programmable microbes to heal him, including building a new arm, and then after the nice person act doesn’t fool him, she uses it to undo the new arm and then do it back up again as a means of keeping him in line. It’s a very unpleasant thought, really…

Meanwhile The Doctor and Roz are suffering from the virus, leading to the former internally talking to the microbes in a deep sleep, while Roz eventually joins the fight on the side opposite Contessa, which is actually nothing but robots. The Doctor is with a group of teens / 20-somethings who mysteriously survived the virus, though it’s soon revealed that it was because, as children, they were the bodies used to test and create the deadly plague in the first place, and it was only them finding and playing with each other that caused the final virus to be found… All very grim, this planet…

Of course it all works out for everyone in the end, well, as much as it can given all they’ve been through. It’s a good story, with some interesting characters that admittedly could have been better fleshed out had the story been longer, though given the barren nature of the planet I’m not sure the premise could have further stretched, to be honest.

The Thrantasians (again, ?) method of time travel, much like Chris in the story, left me a bit baffled… something to do with going into stasis and then travelling back in time, because they can’t go forward in time, or something… Either way it seemed like the writer took a while thinking about it and thought it was great, but failed to explain it properly… or it would have taken too long to explain? Or maybe I just wasn’t paying attention enough. Who knows?

That was it really, beyond the nature of these 1 hour stories feeling a little rushed sometimes, but these two aren’t even close to some of the worse examples seen in, say, the Fourth Doctor Adventures series…

Not much really, ignoring obvious stories like the companions’ debut story and things like that, there weren’t really any direct or even indirect references to past stories. At a stretch you could mention the Ninth Doctor TV classic “The Empty Child / The Doctor Dances”, where “nanogenes” causes a plague by healing incorrectly, before being given correct information and actually healing people, which is a similar kind of thing seen in Vangaurd.

The first two stories in “The New Adventures – Volume 1” are a fun slice of sci-fi, with a bit more serious tone to them without going overboard. If this pace keeps up then it will be worth every penny of the £20 download, and I’ll look forward to Volume 2.