Endgame is not just the debut for Izzy, but it’s the start of the Eighth Doctor’s great run in Doctor Who Magazine. As his Big Finish audio tenure went on the Doctor got more and more cynical and sarcastic, where as these comics have him just like in the TV movie: very excitable and funny. Izzy is a great companion too, a “nerdy” character within a very nerdy sci-fi series works great. So let’s take a look at Endgame (the story, not the whole Graphic novel…) and kick off the Eighth Doctor’s lengthy part in the Audio/Comic Companions Debut Marathon!

Returning to Stockbridge, the Doctor is reunited with an old friend, gains a new companion and comes into conflict with an old enemy.

The three main characters of the story, other than The Doctor himself… *hums House of Fun by Madness*

The Doctor (Paul McGann) – The Doctor is still fresh in his more open-minded and adventure seeking incarnation, and has found himself in Stockbridge again. He’s soon meeting back up with Max Edison, but also meeting up with a less friendlier face from his past…

Izzy Sinclair – Izzy is a self-professed paranormal investigator and big sci-fi fan. She is constantly fighting her own lack of knowledge about her true parentage, even going as far as to call herself “Izzy S., the S standing for Somebody”.

Max Edison – Max is Stockbridge’s resident nerdy conspiracy nut who, thanks to a run in with The Doctor in the past, knows full well he’s not crazy…

Marwood – Marwood was a member of the Knights Templar who was taken by the Celestial Toymaker and turned into his lackey. He believes the Toymaker will free him when his service is done, but he may be a tad off on that estimation…

Now THAT’S how you make your debut!

Right from the get-go the story has a very good sense of fun about it. Don’t get me wrong, the DWM Eighth Doctor run does take turns for the dramatic and sad, but with Izzy being such a fun character and the Doctor himself being his more cheerful self, it’s hard not to read these strips without a smile on your face.

Izzy makes a rather spectacular debut, saving The Doctor from some artifical enemies with a blaster, jumping through a window to do it (as you’ve seen!) It’s a great debut picture and within a page or two you already like the duo of The Doctor and Izzy. After the two get to know each other (and the always fun Max Edison is reintroduced) they are attacked by Marwood and his bizarre Fox-headed friend, which then leads to the return of the Celestial Toymaker, which was odd for DWM at the time to bring back an old foe like this. The story then becomes a tad more predictable, as the Toymaker begins to make crazy games for the Doctor and co. to play, including a great scene where Izzy is forced to be the central figure in a very real game of Hangman between the Toymaker and the Doctor.

Eventually the Toymaker gets his hands on the “Imagineum”, which looks like a large mirror, and uses it to create an evil version of The Doctor. This causes trouble until Marwood is swiftly killed by the child-like entity, showing the Shadow Doctor that his new master can’t be trusted, leading to the two Eighth Doctors teaming up and creating a Shadow version of the Toymaker, who then challenges the real one to a game that will be stuck in a perpetual stalemate due to their matching skills. The fake Stockbridge that had served as the playing ground vanishes and everyone returns to normal, leading to Izzy (but not Max) taking The Doctor up on his offer to travel with him.

It’s a fun story, but far from the best in the DWM run. The key  thing is that it establishes both Izzy and the Eighth Doctor himself, who at this point had barely appeared at all after the TV Movie, really well. The art is great too!

Not much to say in the Bad. At four parts its kept going by the bizarre nature of the Toymaker’s powers, though I will say that I personally don’t find him a very good villain. The fact this has a lot of similarities to his sole TV appearance hurts it as well, not to mention giving us an evil version of a Doctor we (at this point) only just started to know was an odd decision! 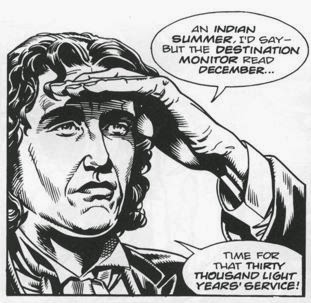 One of the first ever panels of the Eighth Doctor!

The Celestial Toymaker debuted in the First Doctor TV story of the same name. He did reappear on audio several times (including in “The Nightmare Fair”, which was going to be a Sixth Doctor TV story originally…) but has yet to make a reappearance in either TV or comics.

Endgame does many things right, chief among them establishing the Eighth Doctor and Izzy as a great duo who play off of each other well. The Celestial Toymaker isn’t the most interesting adversary, and a lot of the story isn’t the most original, but it still accomplished its task of launching the fantastic run of Eighth Doctor comics.