We continue our look at the third volume of the Tenth Doctor Adventures with One Mile Down. It’s a middle of the road story, containing both good and bad, and I can’t help but feel the Judoon, seen here front and centre of the cover image, were added for the sake of it, but without further beating around the bush, let’s have a closer look!

Donna and the Doctor take a holiday in the beautiful underwater city of Vallarasee.

Things have changed since the Doctor last swam through. Vallarasee is now enclosed in an airdome, with Judoon patrolling historic sites. Now, instead of tourists wearing breathing-helmets, native Fins are forced to adapt.

But leaks are trickling into the dome. The Judoon must be persuaded that disaster is imminent, or thousands will be trapped, as the waters rise…

The Doctor (David Tennant) – The Doctor would have loved to have taken Donna to Vallarasee when it was an underwater paradise, but now it’s a big tourist trap full of badly treated locals, he’s less than thrilled.

Donna Noble (Catherine Tate) – Donna saw the infomercial for Vallarasee and insisted The Doctor take her there, despite his misgivings. Who doesn’t like a bit of a holiday now and again?

Pickus (Christopher Naylor) – Pickus is the chief engineer of the dome that stops the water from flowing into the now-drained city of his people. His life would be all misery if it weren’t for his human love interest who’s coming to visit.

Thispus (Robert Whitelock) – Thispus is in charge of Vallarasee, well, at least as much as he can given he’s under the boot of Patricia Derbyshire…

Patricia Derbyshire (Eleanor Crooks) – Patricia was tasked with the job of turning the underwater paradise of Vallarasee into a tourist attraction, and she feels she’s done just that.

Andrea (Rakie Ayola) – Andrea has fallen in love with a “Fin” named Pickus, and she’s looking forward to seeing him as she arrives in his lovely, if not suddenly dry, home…

The Judoon (Nicholas Briggs) – The Judoon are a galactic peace-keeping force that, sadly for many, take an all-too literal idea of the law and therefore have arrested people for minor infractions in the past… Sounds perfect for guarding the Vallarasee artefacts! 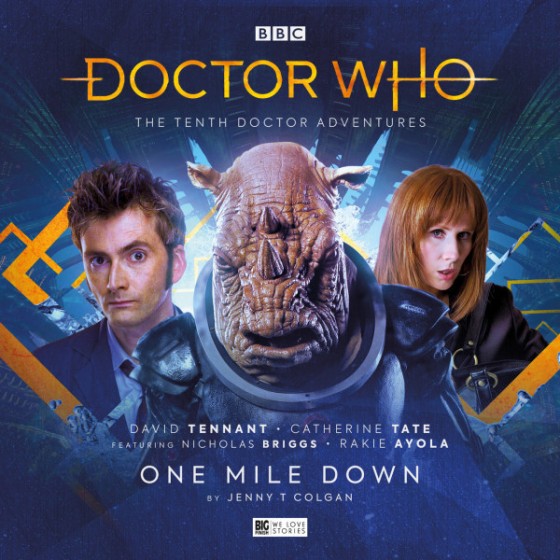 Looks like a Judoon centric story is … oh, or not. Oh well *shrugs*

The story, while not very subtle, has a good message at its heart, one of exploiting a native populace for the sake of gaining some tourism money being a not very nice thing to do. Yes, the main crux of the story is an evil corporation has turned a beautiful underwater city into a tourist trap by draining it and putting a dome over the whole place. People used to visit wearing breathing helmets, but now the local Vallarasians (?) have to wear helmets full of water to walk around their own homes. Cue lots of racism, a few leaks turning into a full-on collapse of the dome, and a disgruntled and poorly treated “Fin” leader, Thispus, turning out to be responsible for the whole dome collapse in the first place as a way to reclaim his home. Terrorism and killing the racist race isn’t any better than what they were doing, two wrong don’t make a right, and all that jazz.

There was a child Judoon called Clo that was legitimately funny, and very of the era. Although they felt shoe-horned in, the Judoon save the day (by being tricked) with their H20 scoop seen in their first TV appearance, so at least they weren’t completely pointless, and they had some funny scenes with their super-strict laws, so… overall, happy the Judoon are featured, even if them being front and centre still seems a little… forced.

During most of the story Donna is stuck on the ground with a woman who has fallen in love with a man from Vallarasee, and a flat-out racist by the name of Garth, meanwhile The Doctor is in the head office having to deal with Thispus and the woman at the head of the tourist company. It’s a shame that the two are kept apart for so long, as their chemistry is the best part about these releases. They had some good lines at the start, but that was it.

Plus I don’t get where the writer was going with Garth. He was a really blatant and unpleasant racist for the whole story, but when he tried to stop a Judoon from taking a place on the escape raft and got punched for it, Donna stuck up for her “racist friend”. The two then get quite close, before he’s left behind by The Doctor and Donna on a lovely beach to close the story. Now, I’m not saying because the character is racist he should have been killed off, but I was hoping for him to at least learn a lesson or something, not have Donna find out he’s not so bad after all, even though he clearly is.

Andrea, the woman who was in love with a fishman, is also confusing. At the end, when realising that now the city is underwater she’ll have to wear a helmet to be with her love rather than the other way round, she was hesitant to continue the relationship, at least until hearing her love will now be councillor. So, turns out the nice girl who is in love with someone despite the differences in appearances was actually also a bit of a shallow, unpleasant character as well… Hooray?

The Judoon front and centre on the overall cover too, for some reason!

The Judoon first appeared in Tenth Doctor TV story “Smith and Jones”, and have reappeared on TV, in Comics and on Audio since, being one of the most prominently reused “nuWho” creatures.

Apart from that though, the story is very much stand-alone.

One Mile Down is a decent story with a good, if not on-the-nose, message at its heart. Sadly some characters are just confusing, and it seems a shame to keep The Doctor and Donna away from each other for so much of the run time. Bit of a mixed bag, so it gets a middling score!