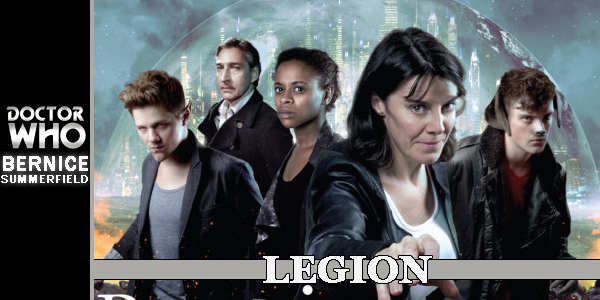 Bernice Summerfield has finally reached Legion, and … once again we get a boxset of mostly completely stand-alone episodes, one of which ended up being a backdoor pilot for a different audio series all together. It’s not a bad thing to have single stories from time to time, but after a box of them stalling time for Benny to get to Legion, it was an odd choice… Let’s take a look if they still stand well on their own, anyway!

Things aren’t going great for Bernice Summerfield. Her one time comrade-cum-adversary, Irving Braxiatel, isn’t the man she knew; her long-lost teenage son, Peter, isn’t exactly pleased to see her; and she’s woken up with one hell of a hangover…

But when an ancient and dormant spacecraft threatens the safety of Legion City, Bernice and Peter have to put their differences aside in order to investigate an inexplicable mystery involving time-travelling scientists, corporate espionage and simple, cold-blooded murder…

Can Benny discover the true killer before a warp core breach destroys them all? Can a five thousand-year-old body solve a murder yet to happen? And will the Vesuvius fall to the planet below…?

Bernice Summerfield (Lisa Bowerman) – Benny has made it to Legion, but sadly her son is anything but welcoming of her, and to make matters worse Brax is here as well! What else could happen to ruin her day? Well…

Ruth (Ayesha Antoine) – Ruth is serving as Benny’s apprentice-come-friend and is happy to see her boss/partner reach her destination, even if it hasn’t worked out as Benny wanted.

Peter Summerfield (Thomas Grant) – Peter is Benny’s son and he’s had a rough time of it as of late, building up a reputation as a tough bouncer type at Brax’s bar in order to scrape a living. Still, it beats talking to his mother…

Irving Braxiatel (Miles Richardson) – This Braxiatel is from another universe entirely, taking advantage of this universe’s version of himself’s contacts and fame. What does he want on Legion, and what has it got to do with Benny? Well that’s a different story…

Jack (David Ames) – Jack was caught in the same trap as Benny and Ruth a while ago, and somehow found himself on Legion working at Brax’s bar… funny how life is sometimes.

Sheira Rynn and Mortan Hardak (Lizzie Hopley and Andrew Hayden-Smith) – Sheira and Mortan were corporate spies onboard the Vesuvius, a ship that had been time-hopping for a good 5,000 years by the time they’re discovered by Benny. The only problem is the body that’s with them…

Dorian Gray (Alexander Vlahos) – Like the old tale, Dorian never ages and has a picture to help him with this. He’s looking for this painting, and he’s heard it’s on Legion…

The Ikerians (Cameron Blakely and Matt Butcher) – The Ikerians are popular traders on the outskirts of Legion City, selling everything from small tools to battleships.

For the record, the individual covers for the stories are just this but with “Legion” replaced with whatever the episode title is…

Legion is a tricky box to talk about because more so than even the previous boxset, this collection features very stand-alone stories. With no real arc to talk about beyond Benny being on Legion and having issues talking with her son, we may as well just look at the three separately…

Vesuvius Rising was a fun story, reminded me of a Blake’s 7 story that I can’t remember the name of (helpful bit of reviewing right there!). Anyway, Benny, Peter and Ruth arrive on a ship from millennia ago that was about to crash into Legion City, and on board they find the frozen crew, and one of trio is dead. Murdered no less. When the other two are woken they both blame the other for the murder, leaving Benny to have to work it all about before the ship’s time drive explodes and kills them all along with Legion City. It’s a very weird “Whodunnit?” that’s for sure! It gets even weirder when one of the males is actually the supposed dead female crew member who used technology to take the form of the person she murdered and try to disguise his body as hers. Yeah… it was a strange sequence of events. As I’m sure you can imagine, she doesn’t get away with it, and is left on the ship as it safely explodes away from Legion, while Benny and co. escape. It was a good story, all things being equal.

Shades of Gray, the second story, is a mixed bag. On the one hand it does tell an interesting story about a modern take on the old Dorian Gray character, told through flashbacks Benny, Ruth and Jack all experience via a weird and sudden seance-like ability Jack apparently has. It has some good drama and Alexander Vlahos makes a good, charismatic Dorian, but in the end it felt completely out-of-place. Given all Legion was said to be, having a story in a spooky house with more fantasy elements that overall had zero impact on any character going forward made it seem like a bit of waste.

Then again, speaking of feeling like a waste, Episode 3 “Everybody Loves Irving”. It’s framed as a simple shopping trip with a humourous group of little alien shop owners, and that’s all the first third is. Then Benny sits in Brax’s newly brought base and has a bit of a convo with the base’s A.I. and some visiting pilots and an interior decorator, then that was… it really. It sort of works as a funny side step (especially a side-story with Ruth, Jack and Peter), and wasn’t completely devoid of plot, but it once again seemed rather pointless, while not even telling a good story like Episode 2. That’s two stories out of three that felt like it was just filling time, but filling time waiting for what? The next box? That doesn’t seem fair on those who actually brought this at full price (unlike myself!)

I have to say that once again Ruth did practically nothing other than describe things and ask Benny questions. Jack is a mystery, but at least he’s a funny character that could evolve going forward, where Ruth is just… dull.

The box doesn’t connect to anything other than what came before it. These boxes are very self-contained, I’ll give them that much!

Dorian Gray soon span-off from this into his own series, though from what I’ve read that series isn’t actually in the Doctor Who universe, so… No idea how that works!

Legion started off good, with a good story focusing on a murder mystery while also featuring the issues between Benny and her son, and then it was followed by two stand-alone stories that just lacked any point to them, and the latter just wasn’t even that good. These boxsets are certainly inconsistent, that’s for sure!