During my turbulent summer this was the perfect game to get released for me, as it was easy to dip in and out of, be it handheld or full screen. It feels like a massive game, but in reality it’s a pretty simple level creator tool, but it lends itself to so many creative ideas that it will last a long, long time. So let’s take a look!

Wow… how creative of me. 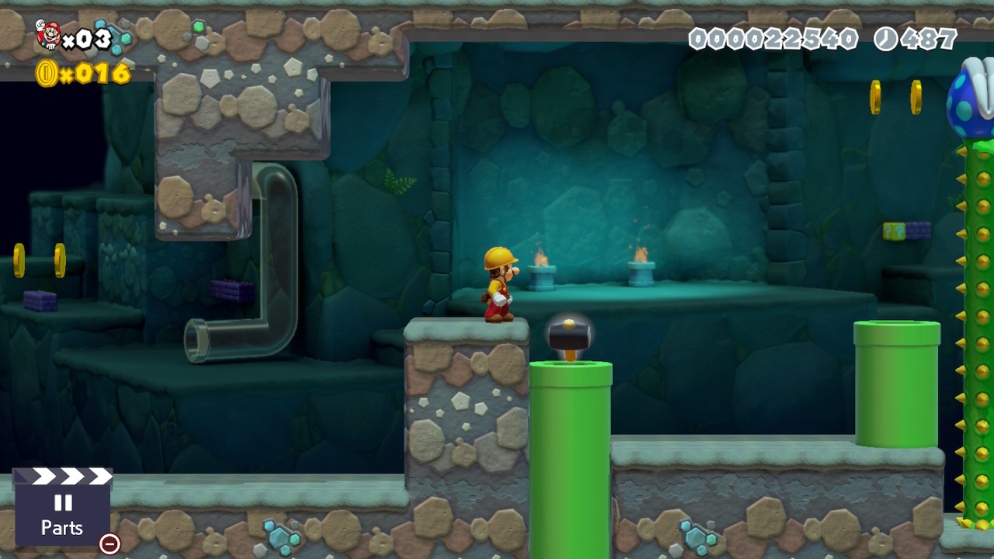 The new hammer power up, surprisingly not a Donkey Kong reference this time!

The gameplay itself is just classic Mario, you run from the left side of the screen to the right side, with platforming challenges and enemies to defeat. There are various power-ups spread across the level styles, from Super Mushrooms making Mario (or Luigi or one of the two Toads that are all selectable) get bigger and can take an extra hit, to fire flowers that allow you to flick fireballs, and even the Cat Mario power up, though that’s limited to the 3D World build set. There are also two hidden power ups unlocked via the story mode: The bouncing ball power up from Super Mario Land (complete with Gameboy colour pallet and the classic SML Overworld theme) and the Hammer, which allows you to break blocks and even hammer so repeatedly you can scale walls.

Though this is Super Mario Maker, so really the main “gameplay” is the stage creator, which allows you to place blocks, enemies and power-ups, and even go deeper to set the screen scroll rate, have buttons and switches do certain things, and so, so much more for those with some imagination and practice. Some truly amazing levels have been created so far, including some extremely challenging levels, and some creative ideas like have a “choose your own adventure” style level in first person that has to be seen to be believed. You can download other people’s creations by searching or with their code, or you can play “Endless Challenge” where you go through as many randomly downloaded levels as you can after choosing a difficulty level.

Mario cowers at the harsh, grinding path he is about to be dragged through… it’s a metaphor for life…

The other major mode for the game is a “Story Mode”, though really it’s a very rough story surrounding Peach’s castle being destroyed (by the Undo Dog from Mario Paint!) and you having to pay for the new castle’s construction by doing requests from people. The requests are levels made by Nintendo Staff, and range from simple ones that exist purely to teach you a new mechanic of the game or a clever way of using some items, and others are genuinely challenging little puzzles or levels. It’s good fun, and again perfect to dip in and out of. 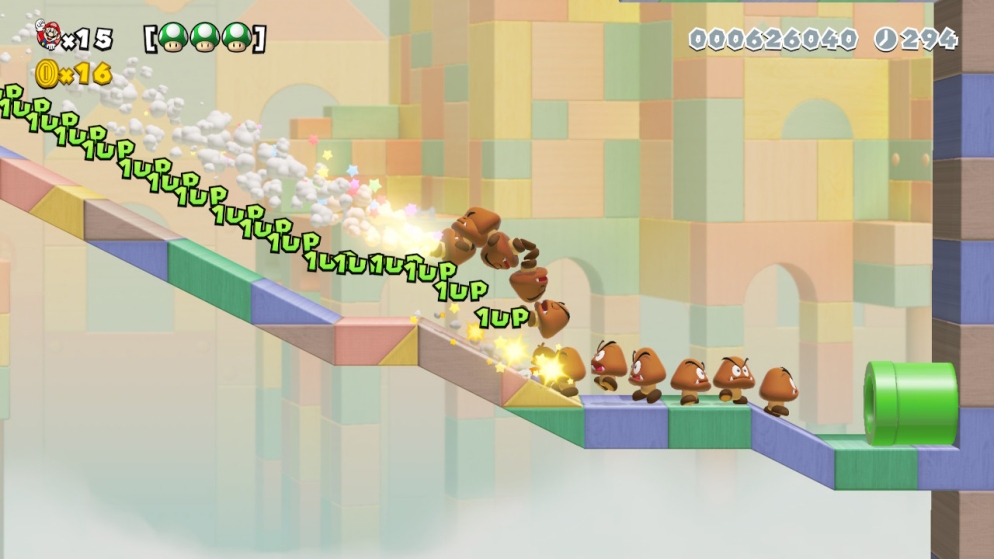 This level wasn’t so challenging…

The graphics are great here. The original SMB, SMB3 and SMW levels all retain their original sprites, though admittedly sharpened, but with a full 16:9 HD screen. The Super Mario 3D Land has very nice, detailed and colourful 3D models as well, though on a 2D plane. Can’t complain about the looks.

As for sound? Definitely can’t complain there! It retains the original soundtracks to all the levels, plus brand new ones for the level themes that didn’t exist previously, like a Super Mario Bros. Desert theme, or a Super Mario World Snow level. The new SMB1 themes are made by the original composer Koji Kondo, giving it that extra bit of legitimacy, though the great and extremely catchy Jungle theme probably wouldn’t have appeared in the 80s. Damn good though! 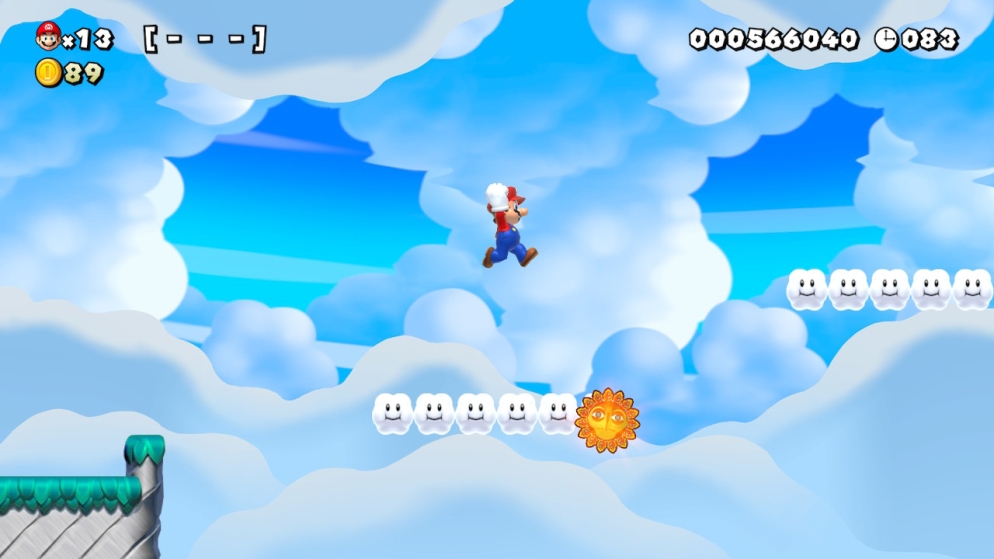 Seeing other game’s items and enemies in a new style is always fun. This is the SMB3 Angry Sun in New SMBU… or the “weird Aztec sun”, I guess?

Super Mario Maker 2 is a perfect game to just dip into when you want a quick and fun go on something. I may not be a great level maker (at all, as it turns out…) but playing endless challenge and not knowing what’s coming next, or playing the most downloaded level of the week is all really fun. Highly recommended.