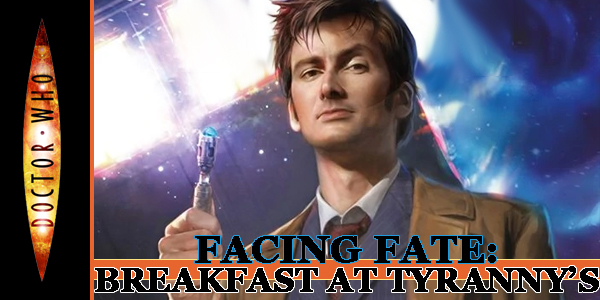 It’s time to resume our look at the Year Three Titan Doctor Who comics proper with the 10th Doctor, a run with the subtitle “Facing Fate” (a subtitle seems to be a theme with the three core Titan Doctors last year…) Volume 1 of this year has the frankly fantastic subtitle of “Breakfast at Tyranny’s” and sees our lead trio being manipulated by powerful forces, as they tend to do…

It’s the start of a brand-new year for the Doctor, Gabby, and Cindy, and things are looking very different for the Tenth Doctor’s TARDIS team! Dangerously different, in fact! Did the Doctor really abandon Gabby and Cindy back to their life on Earth – and why is he wandering homeless, without his TARDIS, on a mystifying alien world? The truth will dazzle, terrify, and entertain you!

There are some fun, alternate history stuff going on in the first of the two stories featured here, as a mysterious alien force holds The Doctor, Gabby, Cindy and “Noobis” (the reborn Anubis) prisoner and are trying to duplicate them while keeping their minds in a psychic prison where they live pretty bad or mundane lives. The Doctor is a homeless man, unable to travel, Gabby is back working a dead-end job, growing older without having travelled or done anything with her life and Cindy… actually hers was alright. She was in a relationship with Cleo from issues past, with a cat version of Noobis.

Thanks to … *sigh*… Noobis’s mental powers, he is able to eventually break free long enough to give Cindy a push, leading to her eventually freeing herself and return to reality, eventually freeing The Doctor, Gabby and Noobis. There is a really good scene with The Doctor seeing some of his copies, and that some of them came out looking like his older incarnations. Just as they all breathe a sigh of relief, a mysterious red TARDIS with tentacles arrives and pulls Cindy off into space. Bummer. This leads into the second story of this four-issue collection: “Sharper Than a Serpent’s Tooth”.

This similarly two-part story is likewise full of copies, this time of Cindy, and it’s revealed that an other-dimensional version of the Nestene Consciousness is behind it all, and with the assistance of some classic Chinese dragons (that are apparently Godly beings that just protect China, for some reason…) they manage to rescue her, though not without one of the Cindy copies getting killed in the process. You see, these copies were a success, and in fact the Cindy of the present may well be responsible for her ancestors coming into being, which is a hell of a bootstrap paradox!

As per usual for a Titan Comic review, I will mention the art isn’t always on point. In this  case it’s mostly good, though often undramatic, especially during action scenes. It sort of… safe, I guess is the only way I can think of putting it. If there was a “The Average” section of these reviews, it would go there… (which is a line I’ve definitely used before…)

Also, we’re now down to four chapters per book, rather than five, but at the same price. Boo!

The Doctor realises he’s now in a weird Blade Runner universe… or planet, at least.

This follows on straight from the end of the previous volume, “War of Gods”. It also continues straight on to the next story, but given it has an over-arcing title, that bit shouldn’t be a surprise!

“Our universe’s” version of the Nestene Consciousness first appeared in the Third Doctor’s debut story “Spearhead from Space” and has made several other appearances since. 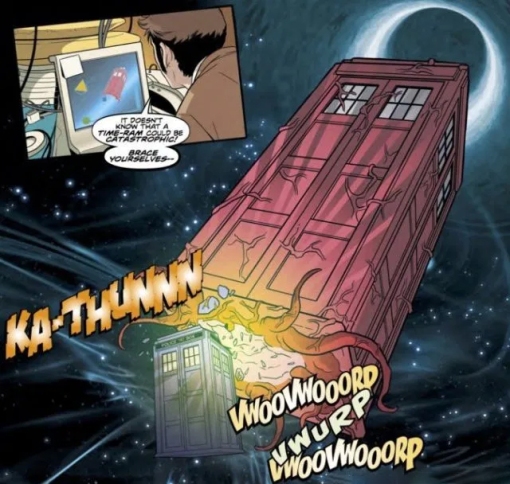 One of the weirder, but more fun pieces of art from the story…

Facing Fate is off to a slow start, as they spend four issues reassembling and reintroducing the main cast. That being said, it had some fun concepts and ideas, so much so that the art often didn’t convey the wacky story they’d created very well. Overall, it’s very average… though “Breakfast at Tyranny’s” is still a 5-Star title!