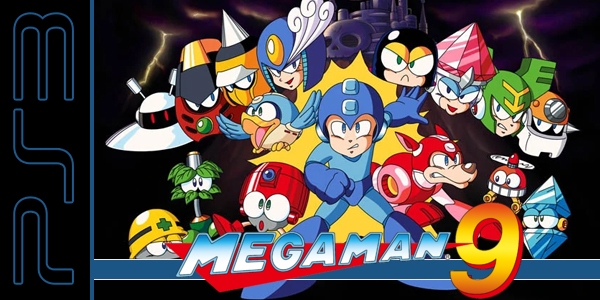 Mega Man 9 was a weird experience for me, given I’ve been playing through the series from MM1 in the last year and a bit, therefore the nostalgia was wasted on me because it felt like the games I played a few months ago, rather than years ago! While I have some issues with just how far they rolled the game system back, not to mention how unfairly difficult it was at times, I still had more fun with this than the previous entry, that’s for sure! Let’s take a closer look, then, shall we? 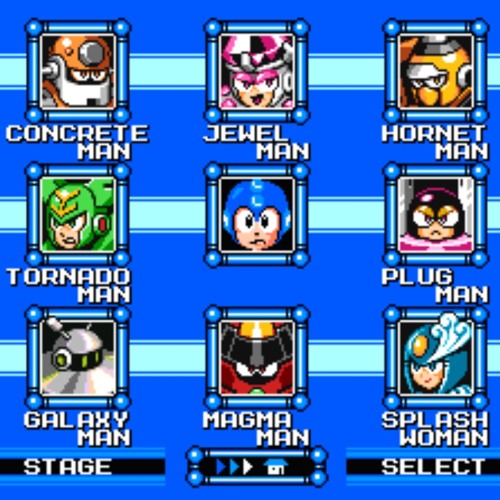 No I didn’t forget to screengrab the select screen! … I just accidentally deleted my screen with the Mega Man 8 screens and didn’t notice until now…

Mega Man 9 was released on the Playstation Network, XBOX Live Arcade and WiiWare digital services in September 2008 (well, October 2008 for XBOX, for some reason…) No physical versions were ever sold, with the exception of the game being part of the “Mega Man Legacy Collection: Volume 2” in 2018.

Our eight Robot Masters are a mix of the entirely predictable, and the actually unique. Magma Man, Tornado Man, and Plug Man are your basic Fire, Wind and Electric types, and Splash Woman is your basic water type, though is the first female Robot Master, so that’s something! Concrete Man (can turn you to concrete as well as the usual making the floor shake by jumping stuff), Hornet Man (Fires robo-bees…) Jewel Man (unique level convention, but he just has the usual floaty shield-like weapon…) and Galaxy Man (UFO-looking guy, has a black hole gun!) at least look or feel a bit more unique…

This is of course all followed by Dr. Wiley levels and bosses! 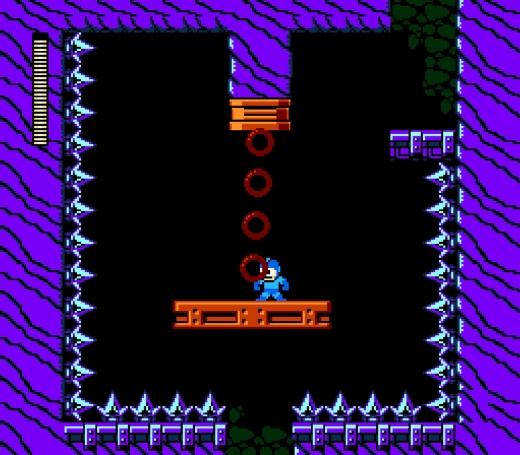 The game is designed as a love letter to the early days of the franchise, though more specifically it’s designed as a love letter to Mega Man 2, meaning no charging your mega buster, no sliding, no switching your weapons with the shoulder buttons, nothing that came along in subsequent games, with the only exception being a shop where you can buy upgrades and one-use assists using screws you pick up, something that was introduced in MM7. Otherwise it’s like a Mega Man 2.5, even though it is set after 8…

So yeah, you run towards the right of the screen, jump across platforms and shoot enemies! Each level has you face as Robot Master, and when one is defeated you get their trademark weapon, plus Rush the dog can also assist you with his coil (high jump) or jet (takes you across the screen) too. Certainly back to basics, that’s for sure, though with the exception of it being ROCK HARD in places. The bosses were relatively easy, but the levels… jeez. There were times I was doing just fine then a helicopter robot just suddenly appeared, grabbed me and ran me into instant-death spikes within a second, or a swinging platform suspended in a room nearly entirely full with spikes with just one hole right under the platform… The first was just plain unfair, and the second took many, many attempts.

Now, yeah, I did get through them, and there were times when you have to use a combination of weapons in really clever ways, so I overall enjoyed the experience, but there were also times when I spent a long time slowly floating up a several-screen anti-gravity chamber only to suddenly get helicoptered into spikes RIGHT AT THE END. Yeah, I knew where to dodge the next time, but man that was just… stupid ROM hack nonsense rather than a challenge. 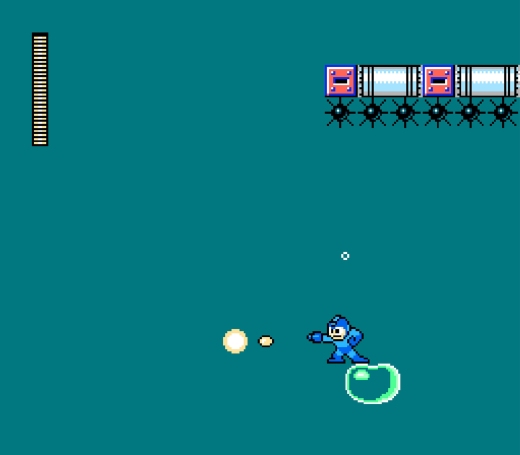 This riding bubbles bit was difficult as well, but more in a fun challenging way…

All that being said, because it plays like Mega Man 2, it’s a smoother and more fun game to control than Mega Man 8, and no level gave me as much of a headache as the stupid “Jump! Jump! Slide! Slide!” jet board Wiley level from that game…

If you brought the DLC (or on Mega Man Legacy Collection 2: if you beat the game) you can play as Proto Man, who only has half the health Mega Man does, but his shield can block projectiles as he jumps, and he can actually slide and charge his Mega Buster like MM3 onwards Mega Man, so it’s at least a lot closer to the gameplay I was used to… that being said I had no intention of going through that again, let alone with less health…

There are also challenges to complete, including defeating all the bosses with just the Mega Buster, or even a no damage run… Jesus. 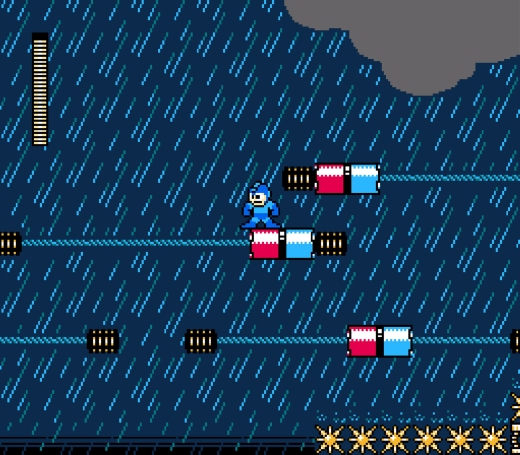 Mega Man actually revolves around these platforms as he stands on them, which is a really fun effect that I failed to show in the screenshot…

Graphics are close to the classic NES games, even down to the 4:3 framing, though the backgrounds and foregrounds are often closer to the later games in the series in terms of detail, rather than the Mega Man 2 era most of the game was stuck in. Otherwise the sprites were nice and of-the-era (that they were trying to emulate).

Music is very good, definitely using a NES-like chipset, but obviously at its fullest capacity. The first two Wiley stages are an immediate standout, it’s no wonder they were remixed in Smash Ultimate! 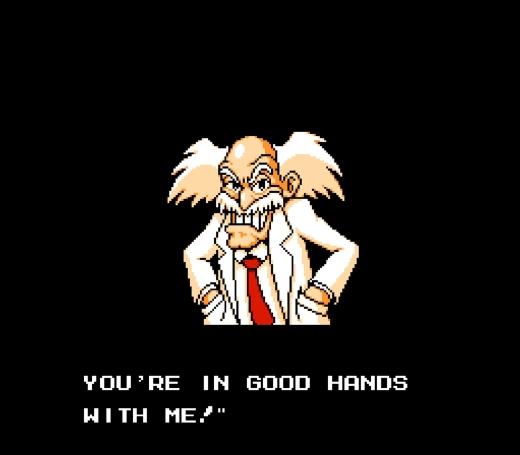 Robots are going on a rampage across the city and clearly the only person to blame is… Dr. Light? Yes, somehow, people believe Dr. Wiley when he claims his innocence in the ninth attack of Robo Masters and arrest Light instead. Obviously Mega Man eventually uncovers the truth, that these robots were due to be deactivated and were instead convinced to rebel by Wiley, which at least is a bit different than the usual in that there is a slight bit of sympathy towards the robots… I guess?

Anyway, at the end Wiley is defeated, and despite Mega Man showing him just how many times he’s ended up begging at the blue bomber’s feet, Wiley reveals he has Dr. Light captured in a cage and refuses to change his ways. Proto Man arrives and tells Mega Man that the Light in the cage is an imposter, but our hero ignores this key advice and tries to save him… and gets electric shocked by the fake as Wiley escapes. Idiot.

Yes, this was truly a modern Mega Man game! The main DLC is the ability to play as Proto Man, with his unique abilities as laid out above. There are also higher difficulty levels (yes, somehow…), new challenges and even a new stage and boss, “Fake Man”, which is a copy of a police robot under Wiley’s control. All this content is unlocked for free with the Legacy Collection 2 version when you complete the game. 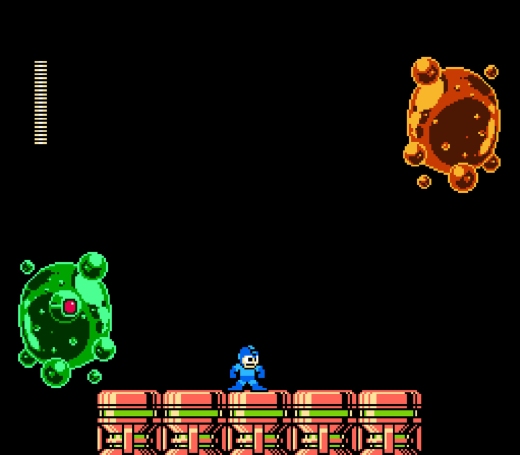 I wonder why the later games all felt the need to pay homage to the Yellow Devil boss from Mega Man 1?

There were times early on that I hated this game. I didn’t understand why they took away such key gameplay features like sliding and charging the Mega Buster (even though I very really used the charge shot…) and it made everything seem extra frustrating, on top of it being far more difficult than most games in the series. As I got more and more re-used to the early controls and moveset I started enjoying myself more, and some… SOME of the harder challenges did give a good sense of satisfaction for finally overcoming them. Overall, it was a fun, but often frustrating experience, and if I want to play an old-school MM game I’d play one of the actual old ones…