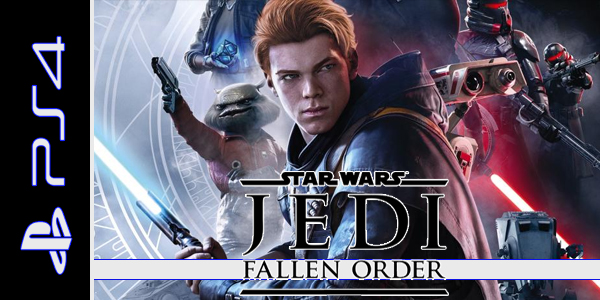 Star Wars Jedi: Fallen Order was released worldwide November 15th 2019. After a sadly controversial Star Wars: Battlefront II release, this surprisingly single player only game was seen by many as a “sorry” from EA, even though it was long in development.

The gameplay is pretty close to Dark Souls, as previously mentioned (or by the sounds of it, the combat is closer to the more recently released Sekiro) You can die in just a few hits from even the most feeble enemy, you have a limited healing items that can only be refreshed at meditation points on the map, but meditating resets the enemies on the map. You can create shortcuts across the map to make getting from one point to the other easier, and as you level up and gain more skills, you’ll have an easier time with enemies, though the further along you get the more difficult the new areas become (sounds obvious, but I just mean it never lets you get too powerful that the game loses challenge). When you die you leave your XP behind, the only way to regain it is to strike the enemy that killed you. That being said, unlike Souls if you gain enough XP you get a skill point, that skill point remains able to be spent even if you die with it. When meditating you can also spend the skill points on a skill tree.

The combat is all lightsabre based, with a block and parry system based on quite precise timing. Luckily there is also the classic dodge rolling, which I know I abused a lot during some of the bosses. Eventually you unlock Jedi powers like pushing enemies away, pulling them in, or throwing your lightsabre, as well as upgrades to the weapon itself, like a double-edged blade and the ability to then split it into two separate sabres. You also unlock Jedi powers that related to making it easier to get around, like wall running and a double jump, which allows for a Metroidvania-style “return to old point on the map now you have new abilities in order to find new paths” part of the gameplay. The third aspect of the gameplay beyond Souls-like combat and Metroidvania-style area exploration is an Uncharted-like platforming system, with rope swings, platform jumping and QTE cutscenes of our lead protagonist falling dramatically and managing to grab onto something just in time, etc.

Climbing up and taking over an AT-AT was definitely a cool set-piece in the game.

The final part of the game that reminds me of another game is a series of Zelda-like dungeons (or buried temples) where you have to solve puzzles with the ability to freeze objects in time temporarily, or pushing and pulling large boulders into slots, all of which made it feel like Breath of the Wild. The game really does feel like the team behind it just took all their favourite parts about other games and melded them together, but thankfully where that could have led to a mishmashed disaster, this game manages to balance all these things so well that it’s just a really good game in its own right. Throw in that modern-classic of collectables and scanning objects and enemies to create a database and you have Jedi: Fallen Order in a nutshell.

There are several bosses, but really where I struggled with the game was when I had to fight multiple people and one or more of those people were projectile-based. One-on-One it didn’t take long for me to get a hang of the timing, but trying to parry or dodge someone in a (laser)sword fight while being shot at from a high place was quite annoying. You can bounce the shots back with an easily timed block, but when you have to decide whether to rebound a shot and get struck in the face, or counter the strike to the face but get shot in the back is where I got a little frustrated.

I mean, don’t get me wrong, it took a good ten tries to beat the final boss on Dathomir (no spoilers!) and about the same or possibly more for the really cheap final boss (who not only had a lot of moves to counter, but used probe droids and flashbangs as well, making it hard to actually concentrate on the boss itself, leaving yourself wide open through no fault of your own) but I never found that frustrating, I just reloaded and tried again.

Balancing on a rickety piece of wood in the Dathomir mountains… still, nice view though! (well, nice in a way…)

This always sounds obvious when talking about a recently released game, but it does indeed look fantastic. Beautiful alien landscapes, great lighting, detailed models… can’t complain about anything.

Once again sound-wise I can’t complain either. The score may not be John Williams but it certainly does the trick, and voice acting and sound effects are all top notch. A modern AAA game that took enough time to live up to the expectations of current gen gaming, nothing more to say.

Cere Junda with the death stare… “He better not eat my weird blue alien goop!”

The lead character and playable protagonist is Cal Kestis, a padawan at the time of Order 66 and the Jedi purge who managed to survive, though his connection to the force was damaged. At the start of the game he’s working on a scrap site on the planet Bracca, but soon his Jedi-ness is discovered and he goes on the run with former Jedi Cere Junda, her pilot friend Greez Dritus, and soon add a little droid called BD-1 to the crew. Their adventure takes them across the galaxy as they look for clues to where a hidden Jedi holocron with the names and locations of Force-sensitive children has been hidden, all the while being chased by the anti-Jedi task force of Inquisitors, specifically the Ninth and Second Sisters.

Say what you want about Star Wars, but they never fail to deliver cool looking helmets!

It turns out that the Second Sister is actually Cere Junda’s old Padawan she left behind after Order 66, Trilla Suduri. They eventually meet and befriend a Night Sister of Dathomir called Merrin, defeated a Fallen Jedi named Taron Malicos, get the holocron, defeat the two sisters, and meet Darth Vader, who very nearly kills both Cal and Cere. In the end Cal realises that they don’t have the strength to protect the young Jedi, and by gathering them up in one place they’d just be making it easier for the Empire to kidnap or slaughter them, so they destroy the holocron instead. It’s a damn good story to follow though!

For the record, there are no mid-action pictures because they all have this weird blur effect, which I guess looks good in motion, but mid-movement screengrabs? Not so much.

Oddly, unless there is a piece of Pre-Order DLC I’ve forgotten about, I don’t think there are any DLC for Fallen Order, which for a major game released in 2019, that’s very odd! Not complaining, although a new planet to explore or an extra chunk of story would get my money, no question.

Ah yes, I made this run a fair few times…

Star Wars Jedi: Fallen Order was a great experience. The combat was satisfying (after you get the knack), it was mostly challenging without being cheap or annoying, the boss fights were great, the level design top notch and the story was really engaging. It gets top marks from me!