Let’s try and catch up with the Big Finish audio releases from the past few months, shall we? Starting with December’s offering of the final War Master box set (… for now) titled Anti-Genesis: it’s your standard “altering history causes the timeline to go all crazy” story, but it has some great ideas and performances at its core. Let’s take a closer look!

After the Master’s TARDIS returns his remains to Gallifrey, in accordance with his final wishes, an intricate plot begins to change the nature of the universe forever. But even in death the Master threatens life. And only CIA Coordinator Narvin can hope to stop him. 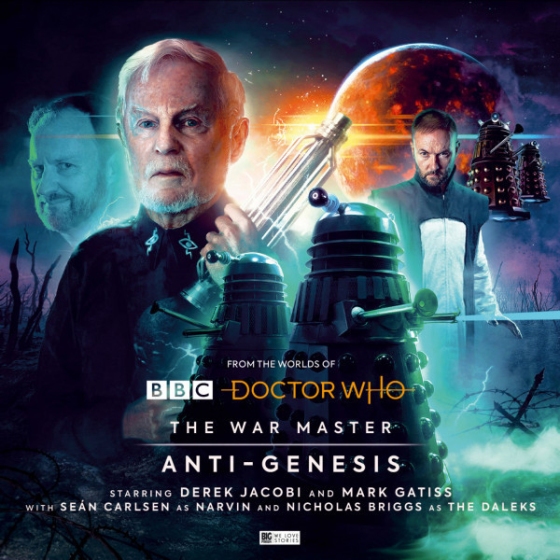 The main story here is The War Master deciding to say “nuts to the rules” and using forbidden Gallifrey tech to go back in time to the early days of Skaro and basically become Davros. He intentionally gets the young Davros killed in a bomb blast that previous only injured him, and then claims to be his uncle to the rescue workers. He then “continues his nephew’s work” and complete his own version of the Daleks, kills The Doctor, Sarah and Harry when they arrive to “do Genesis of the Daleks”, conquers the universe, and is generally very pleased with himself. This is another one of those stories where we see the villain make that horrible realisation that being the sole leader of the entire universe is actually quite dull, and we get to see this twice…

As things get desperate, a small ship of original Daleks (complete with the “Dalek Time Strategist”) manage to temporarily survive the timeline change and look for assistance from an alternate universe, and in their search they find a version of The Master who is lord of his admittedly shrunken and ruined universe, and who really… really wants some companionship. So much so that he willingly pops over to “our” universe in order to help out The Daleks in exchange for being placed in a prominent position in a new universe. It’s a fun twist, and the use of Mark Gatiss’ Master from the Unbound universe is a good idea too, given we have some experience with the character already.

After a good chunk of alternate histories and the like, The Other Master and the Daleks try to pop into different, new timelines to find the one lynchpin that’s causing the whole mess. After several failed attempts they call The War Master himself to them and make him paranoid about his own Daleks and his universe as a whole, causing him to kill Crazlus (Gavin Swift), his Igor-like servant who helped him fake his own death and steal the forbidden tech in the first place, thus reverting everything to normal.

It’s has its moments, Derek Jacobi is of course brilliant, the Mark Gatiss does well with the role too. Anything with either of them in is often fun, especially the War Master “playing Davros”. The ending of this boxset ties straight into the opening of the very first episode of the first War Master box: “Beneath the Viscoid”, as The Master ends this set having to follow the Daleks’ orders in order to find his lost TARDIS. That was a nice “full circle” moment, given Box 1 was written to be a one and done and therefore was set at the end of the War Master’s run, this gives it a nice complete feeling.

A funny drawing from Doctor Who Magazine. Almost like the old comic panels you used to get!

Sadly the main thing I disliked about the story was how familiar it all felt. I’m not talking about the callbacks to Genesis, but as odd as it is to say, we’ve had a few of these “villains actually conquer the universe and the timeline gets messed up, but things get set right in the end” stories over the past few years. What should be epic is becoming pretty trad. Hell, “The Two Masters” had, well, two Masters manage to take control of the universe before getting stopped, giving even more of a connection to this story.

I also didn’t particularly enjoy a lot of Narvin (Seán Carlsen) and Livia (Pippa Bennett-Warner) and their endless “we’re now in a Gallifrey timeline where this happened” story. I mean, it could be that as I still haven’t dipped into the Gallifrey range as a whole that it doesn’t resonate with me (though I’m more than familiar with Narvin by now) but it just felt like it held everything interesting up. 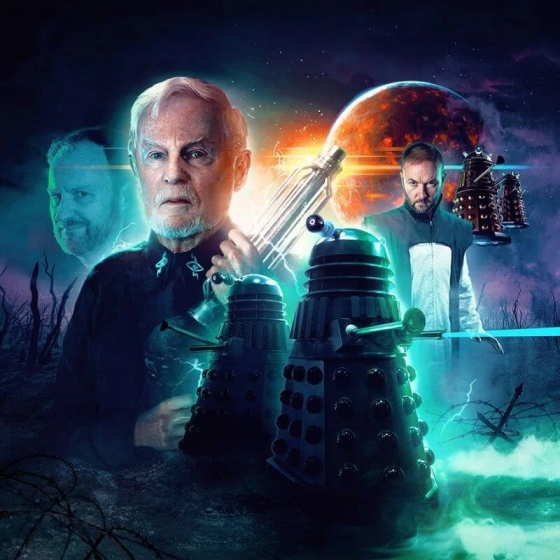 Finally, the textless cover art… There actually wasn’t that much text on it in the first place, but hey… breaks up the review a bit!

Beyond endless references to Fourth Doctor TV classic “Genesis of the Daleks”, right down to the name, plus loads of little references to Dalek lore, there isn’t much to say here. As already mentioned, this box’s ending leads straight into “Beneath the Viscoid”, the first War Master story.

I’ll also mention again that The Master gaining control of the universe with another version of himself has already been done, and done better, with “The Two Masters”.

Mark Gatiss’ Master first appeared in the Doctor Who Unbound story “Sympathy for the Devil”, then later appeared in some of the Bernice Summerfield box sets.

Anti-Genesis didn’t have the great storytelling of the first two War Master sets, and therefore was far more like Rage of the Time Lords, just with a less original plot. In other words, it’s the weakest of the four sets, that’s for sure, but that doesn’t mean it’s not worth your time, just that you won’t be running around raving about it afterwards, like I did the first two sets…