So this was a surprise a few months ago, especially as it was announced that all six episodes were being animated, given Episodes 1 and 3 still exist. Still, surprise? Yes. Bad news? Nope! One more “complete” Troughton story to watch, and with three ways to watch it depending on your preference (All six episodes full-colour animation, the existing episodes with Black and White animation for the missing ones, and a straight up photo recon) there was no reason to complain… What about the story itself though? Well…

The TARDIS arrives at the Gatwick Airport in July 1966. A great many young people have vanished, including Ben and Polly. With the help of Samantha Briggs, the sister of one of the missing youths, the Second Doctor and Jamie must uncover the plot of the Chameleons.

The Doctor, Ben, Jamie and Polly on the runway, soon to “scatter” when the police arrive…

I’ll get the animation out of the way quick: while maybe not as fluid as the Macra Terror was at times, Faceless Ones was a joy to watch. I watched the two existing episodes with the 4:3 Black and White animated Episode 2 in the middle for consistency, then for the final three episodes I switched to the full colour animation, because at that point, why not? Just like with Power of the Daleks and the aforementioned Macra Terror, it really brought the story to life like never before, and it turned out to be a lot more fun than I remembered compared to the photo recon many years ago…

So, the actual story then! Well, it’s not without flaws, that’s for sure, but there is plenty to enjoy. Patrick Troughton’s Doctor is as fun as ever, especially his attempts to explain the crazy situation to the airport’s Commandant (Colin Gordon), the two have perfect chemistry with The Doctor’s insistence and playfulness contrasting with the Commandant’s sarcasm and realist view. It’s a good laugh whether it’s in live action or animation. The setting is unique too, set mostly at Gatwick airport, something that was hard to arrange at the time.

The overall story is basically some aliens from a world that has been damaged severely due to “a massive explosion” are stealing young humans to use their bodies for themselves in order to sustain their otherwise fragile forms. They’re doing this by pretending to be an independent airway that takes young adults to exotic locations, but in reality while high in the air they shrink them down to figurine size, the plane turns into a spaceship, docks in their massive space station, and drops the tiny lifeless bodies off in storage for later use…

The Doctor, Ben, Jamie and Polly on the runway, soon to “scatter” when the police arrive… (For the animated version they switched some of the bodies around, for some reason!)

So it’s safe to say the plot is pretty bonkers, even for Doctor Who. If looking at it logically, which would be a pointless thing to do, but if you did the idea that the Chameleons’ (which is all their known by, but its presumably not the name of their race…) whole plan hinged on humanity being too stupid to figure it out what was happening seems… flawed. Though having said that, apparently nobody noticed the other thousands of young adults that had gone missing, it was just Samantha Briggs (Pauline Collins) calling the police about her brother that even launched an investigation, right when they were only two or three more planes away from completing the plan. This is in the good, for the record, because the story doesn’t take itself seriously, and it creates a rather fun atmosphere.

Pauline Collins is great as the substitute companion for episodes 3-6, it’s a shame she didn’t stick around. I think my favourite character out of the lot was the pilot known as Blade, or rather the Chameleon who possessed the body of the original Blade. Played by Donald Pickering, the character is the head Chameleon on Earth and every bit cool, calm and arrogant as your favourite head of a silly “evil scheme”. At the end, when the characters move up to the Chameleon space station, The Director of the Chameleons showed complete disregard for the people he sent to Earth, even leaving their bodies back on the planet (see down below…), so when their bodies are discovered and the humans start reviving the originals and thus killing the duplicates, Blade panics. He soon overrules and even kills the Director, agreeing to a peaceful resolution with The Doctor over certain death. It was a good scene, and showed he wasn’t quite as one-dimensional as he seemed.

The other things that stood out were Detective Crossland, who somehow takes The Doctor and Jamie seriously despite their claims of aliens and ray guns, all the while smoking a Sherlock Holmes-like pipe (he is eventually taken over by the Director Chameleon, but is at least freed at the end), Jamie being duplicated and the duplicate using Frasier Hines’ actual English voice, and the animation of the airplane going into spaceship mode and the use of lighting as it ascends into the space station. I can’t imagine the model shots looked that great, even if I wouldn’t have cared (given the whole “time period it was created in” thing…) 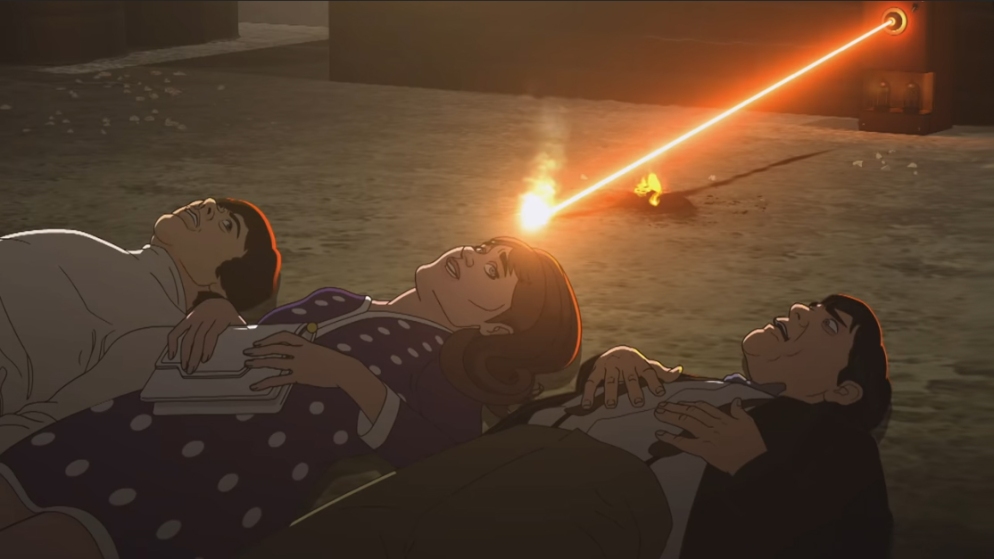 “Doctor! The Laser! It’s… slowly coming this way!”   “I know Samantha, just… wait. I’m already getting feeling back in the my hands”  “Oh yeah. Phew.”

The worst part of the story is that this is the goodbye story for Ben and Polly, but instead of a big send-off their contracts ended at Episode 2, so they suddenly vanish for Episodes 3 – 5, only to reappear for literally 2 minutes right at the end where they say “We’re in our correct time period and location, so… we’re off!” and that’s that! What a crap way to go out of the series. I think it hit me harder this time because I like the characters more thanks to audios and animations in the past five or six years since the recon watch…

While I liked the camp silliness it a lot of scenes, there are two that went too far and broke all immersion for me. The first was when The Doctor, Jamie and Samantha were paralyzed temporarily on the floor, so a Chameleon baddie who was given the task of the killing them decides to walk across to the other side of the room, put a laser-beam-firing box up against a wall, and sets it to very slowly head towards the trio. He then leaves the room with a smirk… Yeah, great plan! Oddly they became unparalysed enough to reflect the laser back and survive, so… that’ll teach them! or something…

On the animation front the only thing that was a bit janky was a fight / pull apart in the previously mentioned carpark, which the animators did their best with, but it… wasn’t great. It didn’t hurt the scene really, given it was pretty stupid to the begin with, but worth mentioning.

Oddly the only continuity is this being Ben and Polly’s last story, and the fact that at the end The Doctor and Jamie don’t know where the TARDIS is, which leads straight into the next story, “The Evil of the Daleks”. The Chameleons haven’t reappeared outside of one novel, apparently. Get on it, Big Finish! 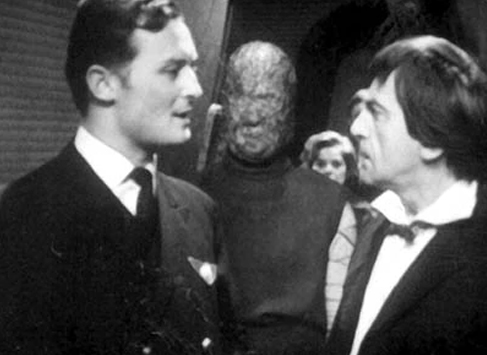 Blade, a faceless Chameleon, and The Doctor. All you need for a great screensh- Oh, great, a random woman is in the background! Oh well.

The Faceless Ones is a fun 2 and a half-ish hours, with a light tone and some enjoyable, if daft, villains. The animation brings it alive, and if you don’t like it, I hear the advanced Recon on this episode is good too. Ben and Polly’s badly handled exit puts a bit of a damper on things, but it doesn’t damage it too badly, mostly because the character of Samantha does a good job filling in. Recommended for a good time, so long as not taken seriously…