Before we get to the Second Doctor’s Lost Stories, I want to cover this “Lost Story”, which was a pilot Terry Nation wrote for a standalone Dalek TV Series. It was bundled with the first Second Doctor Lost Story, but given its strong ties to First Doctor TV Serial “The Daleks’ Master Plan” I thought I’d include it here, in between the first two Doctors, although it will be stored in the Spin-Off section, obviously. So how can you have The Daleks in their own TV story? Well, just have them as the central antagonists and build a cast of characters to fight them! But does it work?

When the crew of Explorer Base One is attacked by the Daleks, Space Security Agents Sara Kingdom, Mark Seven and Jason Corey investigate. They discover a plan that threatens the future of the entire galaxy…

A nice cover, though all these white backgrounds are playing Mary Hell with my templates…

The soundscape and narration by Sara Kingdom actress Jean Marsh is what always stands out to me. Her narrator voice is often sly or cold and harsh, giving an extra punch to the action scenes or moments with a ghastly creature of some description.

The lead trio are good in their admittedly often clichéd roles. Sara is the slightly more vulnerable protagonist with her brother’s life at stake, Jason Corey (Chris Porter) is the sarcastic / heroic type, and Mark Seven (Alan Cox) takes the role of emotionless android who has been programmed to act somewhat human but ends up sounding cold and harsh (which given this was written in ’66 is quite ahead of its time really). They have good banter between the three of them, especially Sara and Jason’s reactions to Mark’s accidentally stoic replies.

Sadly the story itself is quite slow and plodding, and full with yet more evil carnivorous plant life that Mr. Nation seems to love. The Daleks are plotting, they kill a base full of humans, and after Sara, Jason and Mark make their way through killer forests, bottomless chasms and a spider-like “formless” creature, they arrive just in time to see The Daleks fly off, soon with the knowledge that they plan to invade Earth. It’s fine, but I never really got excited.

Oh and Sara’s brother David Kingdom (Alex Mallinson) was kidnapped by The Daleks and taken away at the end of the story, Sara spending the whole two episodes looking for him. I assume that was the “hook” to keep people invested. Well, actually, the original script had Sara kidnapped and David looking for her (it was the 60s after all!) but you get the point, and I don’t blame Big Finish for wanting to get more out of Jean Marsh than a few angry words to The Daleks as their prisoner! 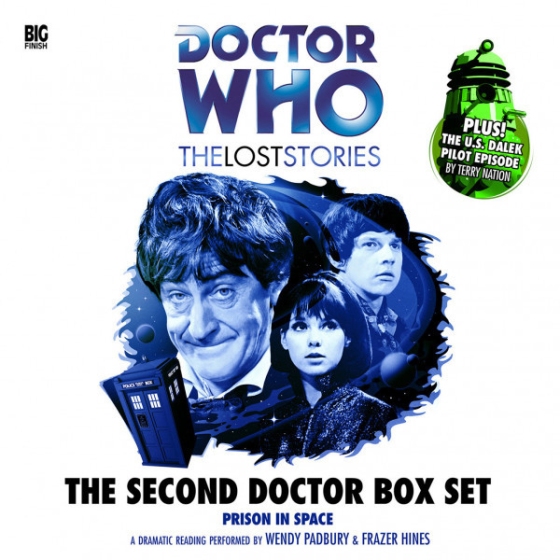 Odd that the Box Set is just one Second Doctor story and a bonus, surely just “Prison In Space with a bonus” would’ve done… Though a bonus with that story would be for it to NOT be included, but I’ll get onto that next week…

Beyond the obvious links to the aforementioned “Daleks’ Master Plan” (I really must cover that soon, so many stories recently have referenced it! I kind of want to wait for a possible animated version though…) but I will mention the First Doctor Companion Chronicle “The Guardian of the Solar System”, which shows Sara meeting Mavic Chen, has the Guardian state that he read a report from Mark Seven about her brother David. We still don’t know what happened to him, mind you!

The Destroyers is an interesting “What could’ve been” to listen to, but I’ll have to say beyond our lead trio (which would’ve been completely different back in the 60s anyway) there wasn’t much to get excited about. It might have gone in a different, more exciting direction had it been turned into a series, you never know, but as it stands “The Destroyers” is a decent hour that’s well narrated and acted, but doesn’t light the world on fire.