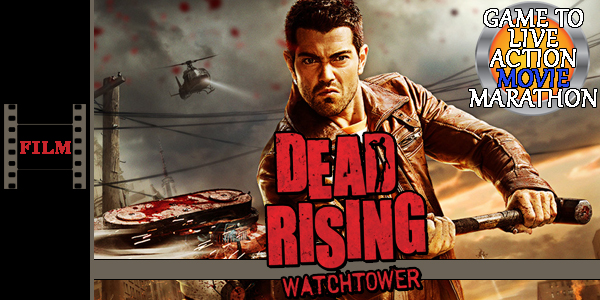 You know, all things considered, Dead Rising: Watchtower has to be one of the better game adaptation movies out there. Now this comes mainly because the original games were pretty much based on cheesy zombie B-movies, so making a Dead Rising film as a cheesy zombie B-movie was a pretty simple task! It also oddly takes place within the game’s universe, referring to the events of Dead Rising 1 and 2 and even featuring game protagonist Frank West in the flesh. So it certainly scores well on the game adaptation front, but how does it do on the “fun film to watch” front?

Online reporter Chase Carter and his camerawoman Jordan as they cover the stories of the people inside of the walled-in quarantined area in the town of East Mission, Oregon, as the government attempts to contain a viral outbreak that turns people into ravenous zombies.

Zombrex is being administered to those infected to hold back the virus but it soon becomes clear that the drug is no longer effective and a zombie outbreak purges the town and infects its inhabitants. Soon Chase, Jordan, grieving mother Maggie, and survivor Crystal find themselves having to battle their way out of the city before it gets firebombed…

It’s weird that their made up protagonist ended up looking so much like Frank West, especially given Frank appears in the film as well!

When you think of Dead Rising you think to killing hordes of zombies, and you think of makeshift weapons made by duct taping several household items together. Well, Watchtower has both of these things covered, plus has a gang of psychopaths for that extra Dead Rising-ness, and Rob Riggle does a great job of bringing Frank West to life as he comments on the goings on via a news broadcast of which he’s an increasingly annoying (to the news anchor) guest. So as I said in the opening, this film gets a big tick for game authenticity. Given what was presumably quite a modest budget, the zombie effects were quite good, as was the needed gore when they get hit by a machete taped to a broom.

The main cast is … fine. Jesse Metcalfe as our lead protagonist Chase Carter was a good choice for the old “arrogant would-be TV star who learns some humility” as he was certainly hard to route for at the start of the film. Maghan Ory as the porn star sounding “Crystal O’Rourke” also serves her purpose well, and no I’m not just saying she’s eye candy (though she is very attractive!) but she’s the more hardnosed woman who survived the outbreak in Dead Rising 2 but has to take Zombrex to survive. How she’s been treated by friends and family since and her general struggle is what changes Chase’s outlook. As they’re the centre of the film it’s a credit that the admittedly simple plotline works. Neither will blow you away with their acting prowess, but they both do their roles well enough for the level of film they’re in.

These Frank West cutaways were often the highlights of the movie, ignoring the fact they apparently were on for like, 48 hours straight and Frank was never taken off-air for his comments… (don’t take this film seriously!)

Likewise Keegan Connor Tracy as sarcastic camerawoman Jordan, Virginia Madsen as unhinged-due-to-grief mother Maggie and Aleks Paunovic as the frankly Mad Max-level psychopath called Logan, who leads a biker gang and wants the zombie virus to spread country wide so he can continue to be … well, crazy, is great fun. I don’t know how they managed to snag Dennis Haysbert but he plays the seemingly nice General Lyons really well, as you’d expect. Turns out the army intentionally gave the people in the area non-functional Zombrex in order to create a panic big enough that people won’t blink at the idea of getting a chip implanted into them that automatically gives them Zombrex, but is actually a tracker chip. It’s the old “necessary evil” shtick, and it’s pulled off well. Jordan is seemingly kidnapped by the Army at the end of the film, but manages to hide her camera away for Chase to find, so he knows both the truth of the outbreak and that she’s been nabbed, so… It’s a good thing a sequel film got greenlighted!

Must be a weird job, playing a zombie extra. Could be a good laugh though!

I know it’s quite low-budget, so I’m not going to complain about effects and acting, but I will say that some of direction was a poor choice, specifically POV shots from the view of the zombies attacking our lead cast, which just gives you awkward moments of actors thrusting weapons at the viewer, and small cameras on the end of an object so we can see the leads using the weapon close up, but the cameras are so small they have a fishbowl lens effect that takes you out of what you’re watching and beats you over the head with the fact that you’re watching through a camera.

I also wasn’t a fan of opening with a scene from two-thirds of a way into the movie before doing the old “X amount of hours/days earlier” subtitle and actually starting the film. I get that the opening takes a little while to get going, but it’s just not my favourite story structure method, it just means later in the film I have to rewatch something I’ve already seen (not that I can rewatch something I haven’t seen, kind of a redundant sentence there, but whatever…)

I really enjoyed Logan and his crazy biker gang and felt that him being eaten by zombies after Crystal and Chase finally got one over on him and managed to escape was a perfect end. Sadly right at the end of the film he returns and tries to blow up a gate to let the zombies out, only for Chase to toss the bomb back at him, just as he zombifies. It just didn’t feel right, it felt like he got his comeuppance and Chase and Crystal got their revenge and we’d moved on, to see him not only return but have another fight with the two before re-getting his comeuppance was poorly judged. Just one final fight would’ve been fine!

How the mighty have fallen, President Palmer…

Dead Rising: Watchtower is a perfectly fine low-budget zombie movie. It pays homage to the game series it itself is a part of really well, and even on its own merits it’s a perfectly acceptable two hours, so long as you go into it with the right frame of mind and expectations. The Mad Max gang and the fights with them are an added bit of fun too, so overall it’s a good laugh, even if it’s not exactly great storytelling or acting…