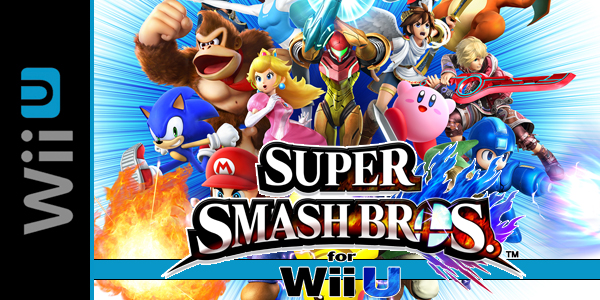 Yes, jumping straight into the modern era with my first contemporary review. I thought this was going to be the first game where I have to use promotion pictures due to not having TV capture equipment, but thankfully photos taken in game and put on an SD card can be read by PCs, so hooray! Off we go… 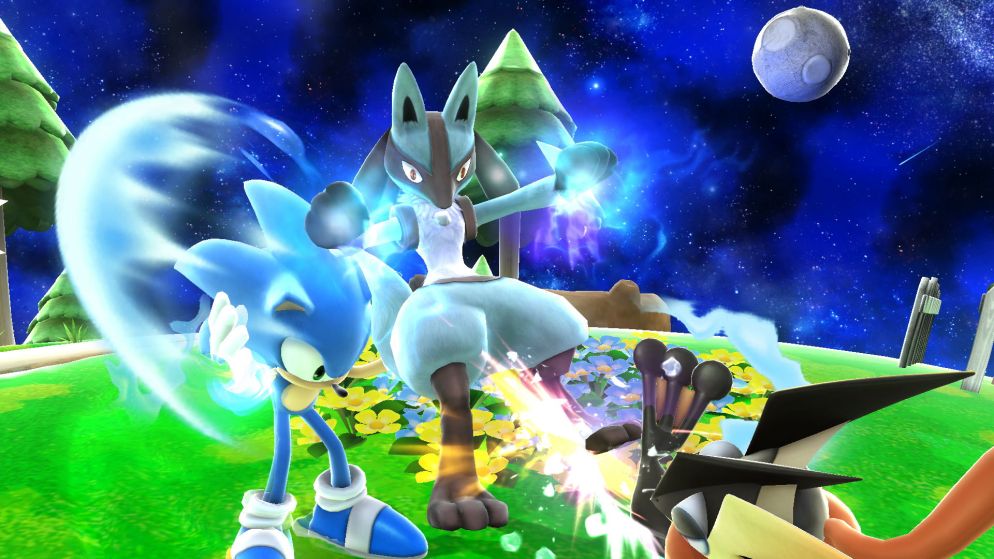 A part of the ever-popular Super Smash Bros. series, this game was first talked about way back in 2011, before entering development in 2012 and being released here in the UK two years later on November 28th 2014 (a week later than the US, and a week earlier than Japan, somehow!). Despite sounding like a temporary code name, Super Smash Bros. for Wii U was the final title (to go along with Super Smash Bros. for 3DS, on the… Virtual Boy…?) ignoring the “Melee” and “Brawl” subtitles that had gone before it.

Out of the box (aka ignoring DLC) the game comes with 49 fighters from 25 franchises, 15 of the characters having never appeared in the series before. New characters include Little Mac from Punch-Out!!, The Villager from Animal Crossing, the Wii Fit Trainer from Wii Fit (yep.) and third party characters Pac-Man and Mega Man. Like Brawl the game also features a wealth of levels and background music from the obvious to the obscure of Nintendo, and hundreds of collectable trophies to view.

For those not in the know, Smash is a “party fighting game”, which really just means its a bit more fun and can be picked up and played by a novice (though can be mastered by more experienced gamers as well) and tends to have more than two fighters on screen at once. You have a basic attack button, which if held with a direction, can be charged to create Smash attacks, more powerful attacks that can launch opponents off the screen. You also have a secondary attack button, which usually has more visually interesting moves, like missiles, fireballs, tree planting, yoga energy ball of death, etc. You die by being knocked off the stage, the higher your health percentage, the further you’ll fly, reach a certain length away from the stage and it’s over. This can be modified to a more traditional health system if you want. Items, like bats, bombs and guns, drop for you to use, as well as Poke Balls and Assist Trophies that summon help from a Pokemon or character that wasn’t featured as playable in this version. Some stages also feature a boss that can be killed or even switched to assisting you depending on the stage.

The big new mode this time round is Smash Tour, which is sadly pretty poor. It’s a board game style mode, but if your counter hits another player, everyone fights each other with Smash characters they’ve collected and the winner will take a fighter from a loser, and each of the three losers will lose a fighter regardless. All the while you level up your stats by collecting things and deal with random events. It sounds good enough, but it’s actually quite dull, and most of the fights will be frustrating because if you build up more fighters than the CPU, they’ll use power ups they’ve collected to shrink you or put your damage up to 200% and you’ll more than likely lose. Overall, it’s just… not very fun.

Playing about with toys… in a game. Oddly satisfying…

Thankfully there are 101 (not literally) other modes for both single play and multi-player to keep you occupied, as well as a challenge board for more hardcore players (well, the latter challenges, anyway). Classic mode, where you fight several CPUs on the way to a boss, is here again, albeit with a slight visual change giving you the option to choose who to face out of a couple of options, and an entirely new boss to face if you’ve chosen a high enough difficulty level. All-Star mode, where you fight groups of fighters based on what years they first debuted in, is also here and is pretty much the same as previous years, although you fight from most modern to oldest, rather than the other way round. Then there are Master Orders and Crazy Orders, where you take part in battles with crazy rules, and bonus games little Home Run Contest, multi-man Melee and Target Blast, which this time is hitting a giant bomb into a group of targets, rather than an assault course where you break targets like in previous games.

Then there is Event Match, where you take part in a battle with specific rules of how to win, as well as special tasks to unlock items. All these modes are available in both single and multi-player, by the way. Also featured is a custom fighter area (for both in-game characters and Miis), stage builder is back, but this time with Wii U gamepad touch controls, plus all the music, movies and 3-odd minute demos of old games as in previous entries to the series.

There is also an online battle mode, where you can compete against players from around the world, and even choose to have the battles be strictly one on one with no weapons if you’re into the “professional” Smash community.

So all in all, you get a crazy amount of content, and that’s not including standard smash and all the custom rules you can apply to it, or the fact that you can now have up to eight fighters on screen at once! So overall by yourself or with friends, you won’t get bored!

I should have put a picture of a DLC character here really! Oh well…

Sometimes a dreaded phrase, in this case it’s fair. The content was worked on after the game was complete, and are reasonably priced. Well, I only brought the new characters and stages, I don’t think extra costumes for your Miis are really worth anything, but your mileage may vary. New characters include returning favourites Mewtwo and Lucas, and brand new 3rd party characters like Street Fighter’s own Ryu, or Bayonetta from… Bayonetta (who is not dressed appropriately for the innocent eyes of Mario and his chums, but hey-ho!). There are various classic stages available to download as well.

The two cardinal sins DLC can commit in my mind are that they were clearly able to be included in the full game and were intentionally held back to get more money, and that they’re too expensive. The Smash DLC is neither of these. 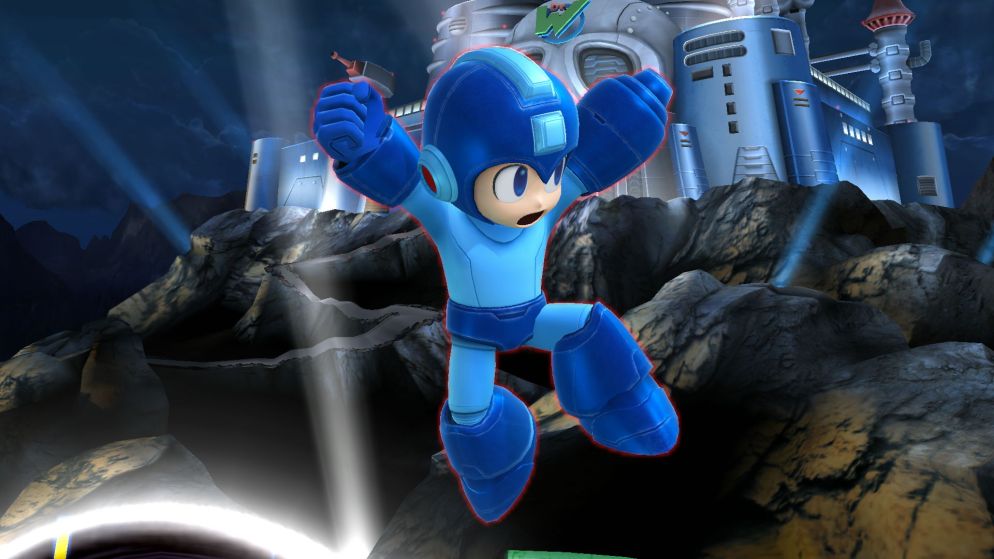 The game looks great; the Wii U may not have the power of a PS4 or XBone but Nintendo shows that it still can still make a very lovely looking game. Clear and detailed character models, great backgrounds and stage detail, nice effects on lasers and explosions. Nothing to complain about here.

Sound wise is much the same. I already mentioned the wealth of background music from gaming history that included, some newly scored with a full-on orchestra, others nicely present as they were. Sound effects and voices are clear and distinct, never getting lost to the music. Top marks again. 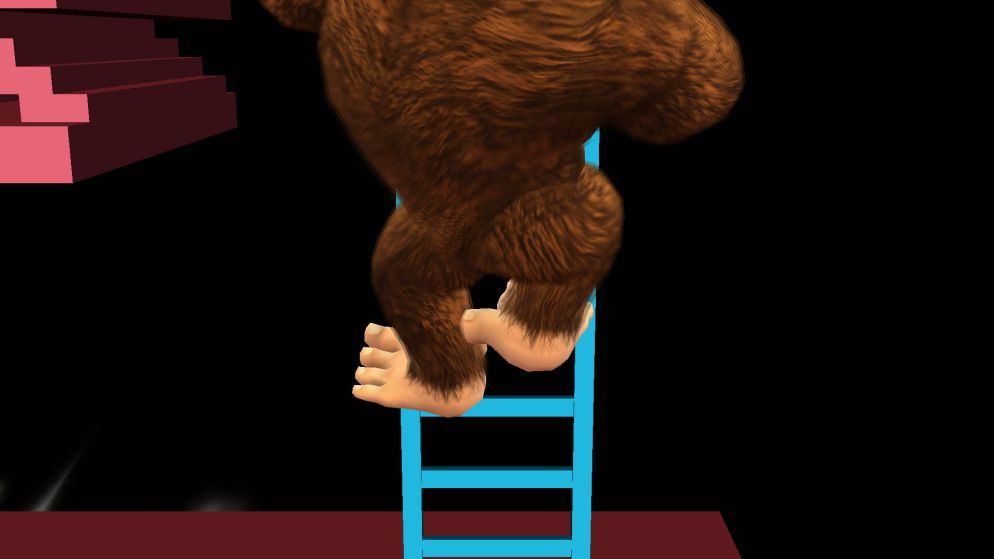 In a fair few years I’ll update this review with a “Then” and “Now”, but obviously it’s just a Now given… well, it’s now.

On my first review I said, “I don’t want my first review to be all gushing about something with little criticism”, well… this is that. The only criticism I found was in the eternally dull and badly thought-out Smash Tour mode, especially compared to the fun “Subspace Emissary” story mode from the last game. Other than that it’s a big love letter to gaming’s past (not just Nintendo!) and a fun game that gets increasingly more fun the more people are playing it with you, but has enough content and online options to keep anyone going for many, many months, even years. Along with Mario Kart 8, this is a reason to buy a Wii U.