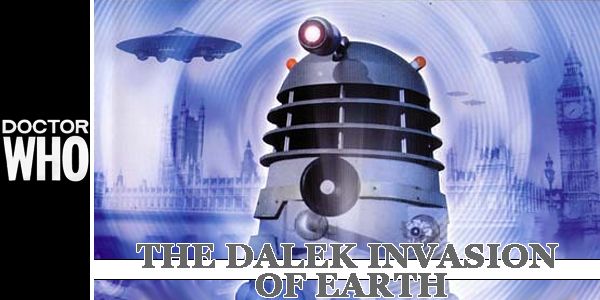 Before deciding to do this blog I started a mini-marathon of one story for each Doctor, with each story being one I hadn’t seen / heard in ages. Seems like a good way to start filling out the “coming soon…” bits of the blog! For the First Doctor I chose this famous story, the second ever Dalek story and the first to show aliens of any kind invading Earth (even if it was a future version of it). How does it hold up (not including special effects, for obvious reasons…) ?

The TARDIS returns to London; however, it’s the 22nd century. With bodies in the river, and quiet in the docklands, the city is a very different place. The Daleks have invaded and it’s up to the Doctor to thwart them once again.

Good on them for keeping a straight face while someone is wearing that… True professionalism!

The Doctor (William Hartnell) – Grumpy and nearly always serious, The Doctor has nonetheless come to enjoy his trips with the humans, though fears for the future safety of his granddaughter…

Susan (Carole Anne Ford) – The granddaughter of The Doctor who, despite being from the same planet as him, seems to lack the very basic knowledge of survival… or how to run and not twist your ankle all the bloody time.

Ian Chesterton (William Russell) – Your stiff upper-lip male character who can do all the brave fighting and heroics that the older Doctor and the weak women (it is the 60s after all!) can’t.

Barbara Wright (Jacqueline Hill) – A school teacher much like Ian, Barbara is more sensible and reserved than Susan, but is still often looking after the brave men and commenting on the situation, rather than taking action (it is the 60s after all!)

David Campbell (Peter Fraser) – A freedom fighter who would never have guessed a war with the Daleks could lead to his falling in love… with Susan, not a Dalek!

The Daleks (Peter Hawkins / David Graham) – Angry racist pepper pots from beyond the stars, now with the ability to hover around without static electricity! Handy… well, apart from with stairs.

“We. Will. Stand in front of your landmarrrrks! We. Will. Do nothing else!”

This story does signify a big shift in several ways, but most importantly it shows The Doctor not caring about history and wanting to instead to stop the Daleks and whatever they’re up to, as well as sticking up for the people of Earth for the first time. The First Doctor’s cranky old man demeanour vanishes, as had done slowly over the first season.

Also important is Susan’s exit at the end of the story. She’s fallen in love but doesn’t want to leave her grandfather alone, so he shuts her out of the TARDIS and tells her to go forward with her life. It’s nice, though I’m not sure a ruined London in the 2160s is the best place to leave her, handsome new boyfriend or not… Still, as mentioned above, the final speech given by The Doctor is a classic moment.

The story also captures a desperate struggle well, the few remaining resistance fighters trying to save Earth with what little they can. We all know the Daleks are based off of Terry Nation’s childhood fear of the Nazis, so this small band of resistance fighting the evil occupiers from underground isn’t exactly subtle on what story he’s trying to tell. Hell, the Daleks even call killing the humans as the “final solution” at one point! Still, it does create a good setting. Also the fact that they weakened the humans by unleashing a virus to thin them out and break them up into small groups is pretty damn unpleasant. The opening scene of the first episode, with everyone wondering why it’s so quiet and does a good job of setting the stage, especially when we find out how the Daleks have conquered Earth. It’s quiet because so much of Earth’s population were wiped out before they even landed…

The Daleks turning people into “Robomen” is also a good plot point, adding to their cruelty and the fact they literally have no feelings toward human life. The few scenes where they’re killed by simply having the robotics removed is a good visual, even if the headgear itself looks… well, like its from 60s sci-fi, I guess! They share a lot of similarities with the Cybermen, when you think about it, and I don’t just mean the names…

Despite the time period in which it was made, it’s well shot, the scenes of Daleks wondering around various landmarks in London is iconic for more than just the for the sake of it being the classic moment. I also have to praise how it jumps around, from the streets of London to the sewers to a large mining site in Bedfordshire. It at least keeps the visuals fresh and gives the characters some new people to interact with, and the way it’s scripted, with each companion meeting someone and eventually all going to the same destination, but meeting different people and seeing different parts of this war-torn, almost post-apocalyptic England is great stuff. It’s the best way to stretch a story for six parts.

Ignoring things that look or sound a bit crap now, like the frankly shockingly bad Dalek flying saucers (which I’m pretty sure were bad even for a mid-60s TV budget…) or the fact that the Dalek zombies are called “Robomen”, the only thing I really dislike about the story is the Daleks’ plot. So, apparently they’re on Earth in order to hollow out the core of the planet, attach some sort of warp drive, and steer the planet around the galaxy as some sort of large spaceship. Given Dalek technology, I’m pretty sure they could just build a spaceship… or continue to use the small spacecraft they already have… or find a planet that doesn’t have a large sentient race on it. Even for a bit of mid-60s sci-fi aimed for a younger audience that’s hard to believe. It’s no wonder later stories have tried to brush it under the rug…

Well, ignoring all following stories with The Daleks, as that would take far too long to list, this story sees The Dcotor’s granddaughter Susan leave. The Eighth Doctor returns to visit her and her son (his great grandson) in the Big Finish audio drama “An Earthly Child”, which is then later followed up by a series of audio dramas starting with “Relative Dimensions” and ending with “Lucie Miller / To The Death”, which features a second invasion of Earth by the Daleks in the 2190s (30-odd years later).

The Big Finish audio drama “Masters of Earth” is set a year before this story, and features the Sixth Doctor and Peri having to make sure not to save Earth, as his first incarnation doing it in 2164 is a fixed moment in time that should not be altered. Similarly, the Fifth Doctor and Nyssa would also arrive in this time period in the early audio release “The Mutant Phase”, though this is revealed to be an altered timeline.

As well as the above audios, Robomen were once again used by the Daleks in the Big Finish audios “Energy of the Daleks” with the Fourth Doctor, and “The Four Doctors” and “Dark Eyes 2 – The Traitor” both featuring the Eighth Doctor as the lead.

You know, Dalek plague or not, I’m pretty sure you’re not supposed to do that anyway…

Even though I didn’t know it, I’m glad this turned out to be the first First Doctor story I review for the blog. I’m actually not a big fan of this period of the show. I find a lot of the stories slow going, and I find William Hartnell’s Doctor a pleasant character (minus early stories) but not as fun as, say, Patrick Troughton who replaced him, or as interesting as a Jon Pertwee, who despite also being strict sometimes, was far more fun to follow. That being said, this is a story I like a lot, and so it gets this era of the show off to a good start on this blog. If you want to watch one story per Doctor, this is a good one to pick for Doctor #1.