The first 8 episodes of the Walking Dead’s Seventh Season starts off with a memorable shocker, but then slowly gets itself into a downbeat groove before a hopeful ending. That right there is some vague writing! Let’s look at it in more detail…

Rick is tormented by Negan moments after killing an unknown member of the group. He drags him into his RV as Rick begins reminiscing on different members of the group… Which member has been killed, and will Negan gain control of Alexandria? 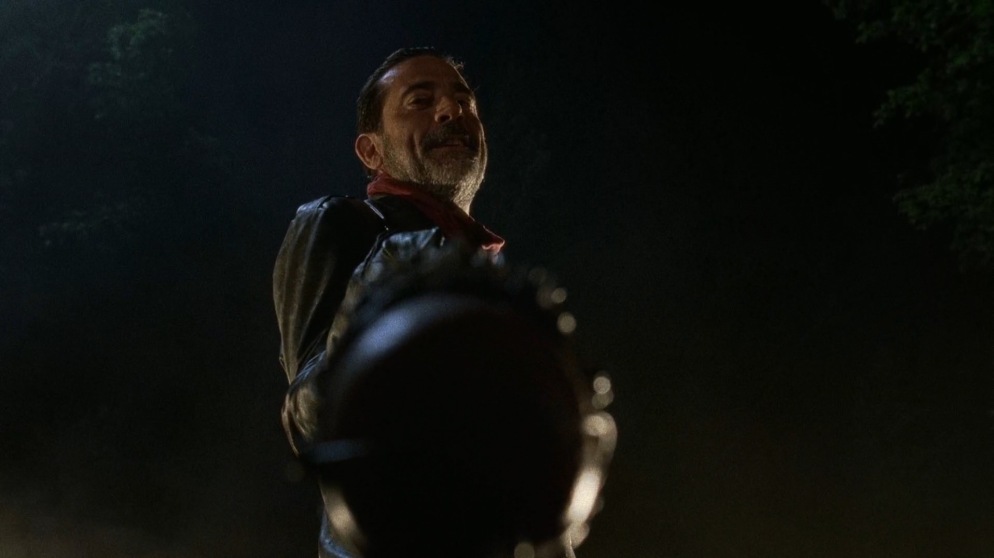 The moment you know you’re screwed.

Rick Grimes (Andrew Lincoln) – Once a regular police officer, now a leader of an ever-increasing group of survivors. He made the mistake of over-confidence and under-estimation, and pays for it in the blood of his allies.

Daryl Dixon (Norman Reedus) – Essentially Rick’s right hand man and mostly-silent and stoic “bad-ass” of the group. His quick temper gets one of his closest friends killed, and he suffers for it… Which is good, really. Knob.

Negan (Jeffery Dean Morgan) – Charismatic leader of the Saviours, a large group of survivors with the manpower and weaponry to bully and beatdown any other group they come across. Negan is fond of using his barbed wire covered bat he calls Lucille to crack open skulls. Everyone needs a hobby!

Glenn Rhee (Steven Yeun) – Long-time member of the group who helped Rick out all the way back in Season 1 Episode 1. His head is turned into goo at the end of the first episode of this season. Ah well… can’t win ‘em all!

Maggie Rhee (Lauren Cohan) – The wife of Glenn, who is pregnant with his child and therefore more than a little upset at the end of the first episode.

Michonne (Danai Gurira) – Katana-swinging female equivalent of Daryl in her more stoic and bad-ass nature, although a relationship with Rick has started to bring out her more gentle side… when she’s not seeing her friends get turned into piles of mush.

Carl Grimes (Chandler Riggs) – Rick’s teenage son who has somehow grown many years older despite only two years of time passing. He was beginning to settle into a normal life (ish) again but now questions everything after seeing friends get killed and his father being subservient to the person who did it.

Carol Peletier (Melissa McBride) – Once a harmless housewife, then a straight up merciless bad ass and now a worried and sheltered woman who thinks she went too far and wants to be alone.

And many… many more! 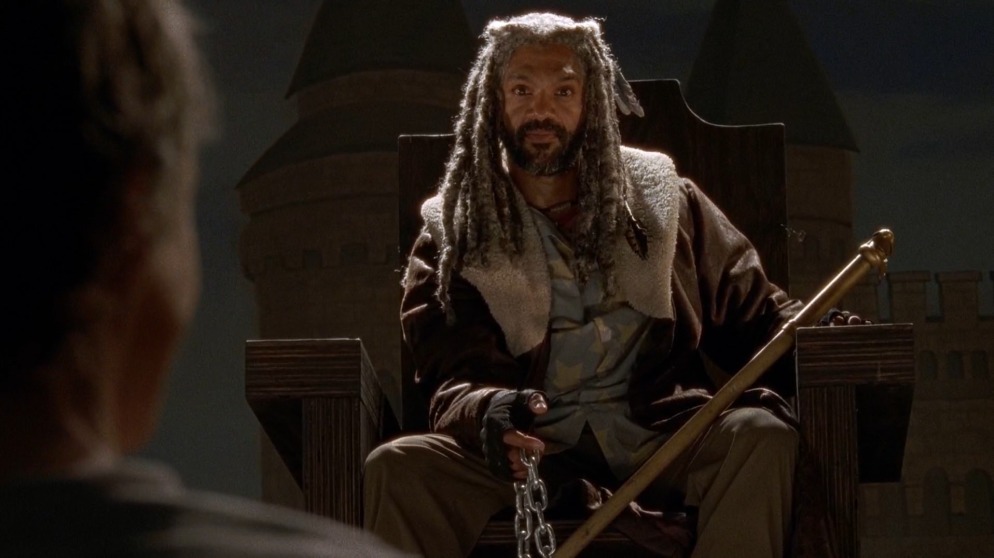 The opening episode, for all its criticism, I thought was great. It was constantly tense, it played about with the comics continuity a bit (not that I read the comics, but you do hear major plot points all the time) and in the end it so devastating that you really wanted to see Negan get his comeuppance. After all, isn’t that what a lead villain is suppose to be? Someone you want to see get beaten by the good guys? Negan, for the record, is fantastic as a villain. He’s charming, occasionally funny and you know if you cross him you’re screwed. The idea that he’s built a group around him through fear and charm is perfectly believable.

The Kingdom, a new settlement that is lead by an eccentric (or so it seems) theatre actor who goes by the name King Ezekiel, who also has a pet tiger for the record, is certainly different. It veers towards the absurd, Mad Max style post-apocalyptic-ness but just about manages to pull it off.

It’s funny to see how Rick goes through so many phases in this half-season. He starts off merciless after having killed people from a rival group in their sleep, then gets browbeaten until he gives up hope and is completely subservient to the Saviours, then as the half-season ends he is back to being his confident self and planning to strike back. Must have been a stressful week or so…

Steven Ogg as Simon, Negan’s right-hand man, is fantastic, sometimes out-Negan-ing Negan. Once you get past the fact that it’s Trevor from GTA V in real life, you can really appreciate how great he is at the role. Episode 5, “Go Getters”, in particular has some great moments for him.

After 7 episodes of our “heroes” (though not really, but hey-ho) being down and feeling hopeless, the ending of everyone reuniting at the Hilltop settlement and agreeing it’s time to fight back was a good way to cap off this half-season. It’s a story they could have dragged out more, which would have been a mistake… obviously.

“This could be a big score, I’d better call Mike and Franklin”.

Carl sneaking onto a truck and trying to kill Negan without a care for his life made sense, he’s just a teen and has had a rather traumatic upbringing (to say the least!) so I can see how this would seem like “what he has to do” to him. Why he shot a few Saviours and then stopped when Negan appears, letting himself get captured I have no idea. He later admitted that he knew he would be killed, and if that’s the case why did you put down the gun and surrender when your target was right there in front of you? Makes no sense!

Episode 6, “Swear”, was one of those “we can’t afford to pay all the top actors 16 times, so here’s an episode with minor cast members only” that didn’t really pay off. Sometimes they’ve been good character pieces, but in this case it was quite dull. Tara, minor female Alexandria survivor, ends up in a new settlement name “Oceanside” that is made up entirely of women. Now there is a post-apocalyptic society they haven’t done yet! Anyway, it wasn’t very good.

Daryl being mentally tortured by the Savours into joining them was an interesting story that I thought would lead to him joining them in a “is he serious or is he waiting for the right time to betray them” sort of storyline. Instead he escapes by the end of Episode 8. Feels like the whole of episode 3 was a waste of time, now…

I also have to quickly mention Abraham, who as a character hasn’t done much, and therefore his being the first head crushed by Lucille meant very little, and meant even less by the end of the episode… Seems like a waste, really. 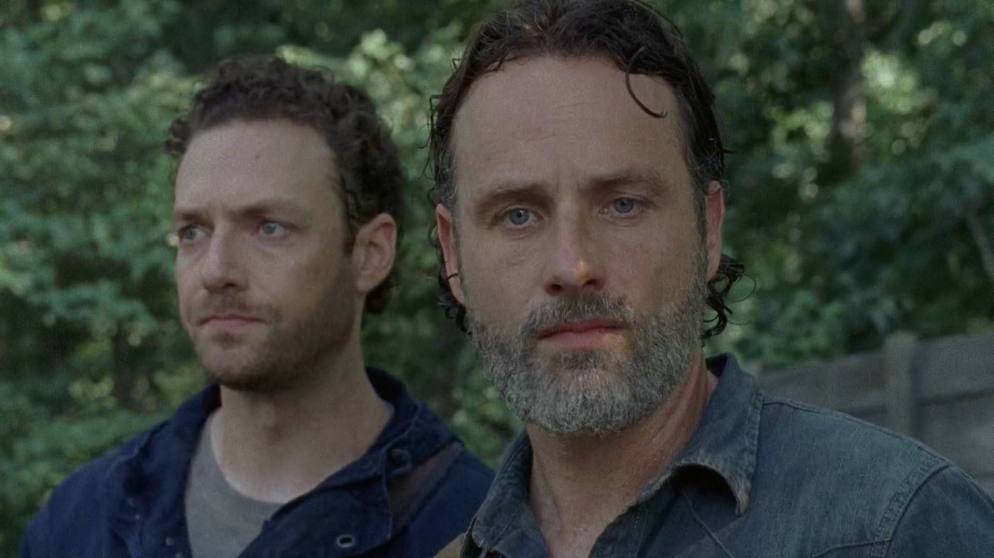 That moment when you realize you have to start killing again.

This half-season is all about the opening episode. Once you get past that it’s downhill, and has a lot of stalling and introducing to do before it comes to the obvious conclusion of Rick wanting to fight back. There were some good, standout moments, so it wasn’t all bad. I’m sure if you’re binge-watching this season rather than watching one a week it will be fine.