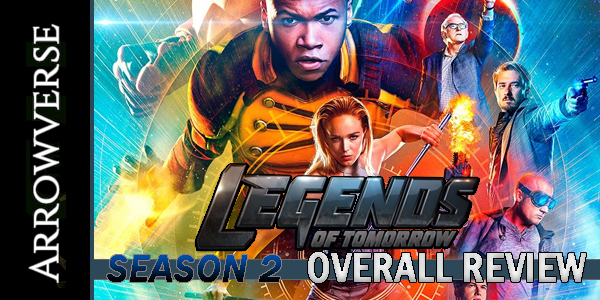 After a mediocre Season 1, Legends of Tomorrow came out swinging and put together a really fun and enjoyable Season 2. Let’s take a look at what made this stand out above its fellow Arrow-verse shows.

The Legends reunite, sans a Captain, and add some new recruits before they are faced with the task of fighting three super villains who are after a reality-altering “Spear of Destiny”. Can the Legends defeat the Legion of Doom?

“WHO designed this console?”

Sara Lance / White Canary (Caity Lotz) – Formally along for the ride as a heavy, Sara soon finds herself as the new Captain. She pulls it off well, and still finds time to kick arse. That’s good time management!

Ray Palmer (Brandon Routh) – Creator of the shrinking Atom suit and a bit of a sci-fi geek. A lot of his focus is taken away from him with a new arrival, but gets a few times to shine…

Jefferson Jackson / Firestorm (Franz Drameh) – Top class mechanic and one half of Firestorm, the few times he gets to use it. Can be short-tempered due to inexperience, but gets better as time goes on, often coming across more reserved than his older-half:

Martin Stein (Victor Garber) – The other half of Firestorm, Martin has a mini-crisis at the start of the season as mucking around with time has given him a daughter he never previously had. Beyond that though, he’s fine. Got a good set of lungs on him too!

Rip Hunter (Arthur Darvill) – Spends the first half of the season in Broadchurch, then returns after his use of the TARDIS’s chameleon arch turns him into a regular human. After that he turns all evil before FINALLY becoming his normal self… just in time to leave. Great run!

Mick Rory / Heat Wave (Dominic Purcell) – Pyromaniac thug who still hangs around with the Legends crew due to his long-time partner’s death leaving him with nothing else to do. Shows moments of genuine change, but also moments of genuine stupidity…

Amaya Jiwe / Vixen (Maisie Richardson-Sellers) – Super hero from the 40s, Vixen has the power to gain an amplified power from several different animals. Sadly, she’s not very interesting beyond that.

Nate Heywood / Steel (Nick Zano) – Pretty much just Ray Palmer from Season 1, but with history replacing science, right down to having a doomed relationship with a crewmate. He even spouts sci-fi and geeky references all the time too. Oh, and after a few episodes, can turn his skin into steel.

Eobard Thawne / Reverse Flash (Matt Letscher) – Technically has already been erased from time, Thawne is on the run from the Black Flash who’s trying to make his death stick. Wants to use the Spear of Destiny to change that, but needs help from people who don’t have to constantly run from a speed demon.

Damien Darhk (Neal McDonough) – Evil magic man who was killed at the end of Arrow Season 4. He’s back due to time travel shenanigans and is just a arrogant and cheesy villainy as before. Hooray!

Malcolm Merlyn (John Barrowman) – Former head of the League of Assassins, has had his life ruined by a long and crazy series of events, and so sees this opportunity to use the Spear to change everything.

And a few more… Make that a lot more, but whatever.

Who doesn’t love a good crossover now and again?

The first half of the series is pretty stand alone, with most episodes being unconnected adventures in time. They serve to settle in the two new regulars and set up the new team dynamic of Sara being in charge, and they do that well. Episodes focusing on the Justice Society of America from the 40s and episodes based on feudal Japan and the old West are good fun.

It’s that half way point where the “Legion of Doom” (love the fact they kept the cheesy name!) form in earnest is when the series really picks up. You have the “will he be saved or is he permanently evil” story with the returning Rip Hunter and a general treasure hunt across time between the two groups looking for the “Spear of Destiny” (again, happy to see the cheesy name kept!). The Legion play off each other so well, and in fact Episode 10, which focuses on the Legion exclusively, is perhaps my favourite of the season.

Stein’s struggle with his daughter and how she wasn’t meant to exist if it weren’t for him meddling in his own time line was good, and unique even within a show about time travel. Also, and I’ll be saying this in all three related seasons, the big crossover “Invasion!” storyline (of which is Stein story was involved) was a lot of fun.

I liked the use of George Lucas, and to a lesser extend J. R. R. Tolkien (though that was a bit of a waste in the end), as historical figures that must be protected. Made a change, and the former at the very least was a fun episode. Similarly Ray got little to do this season (probably due to half his role going to another actor) so it was nice to see him front and centre in Episode 14, based around the Apollo 13 mission. 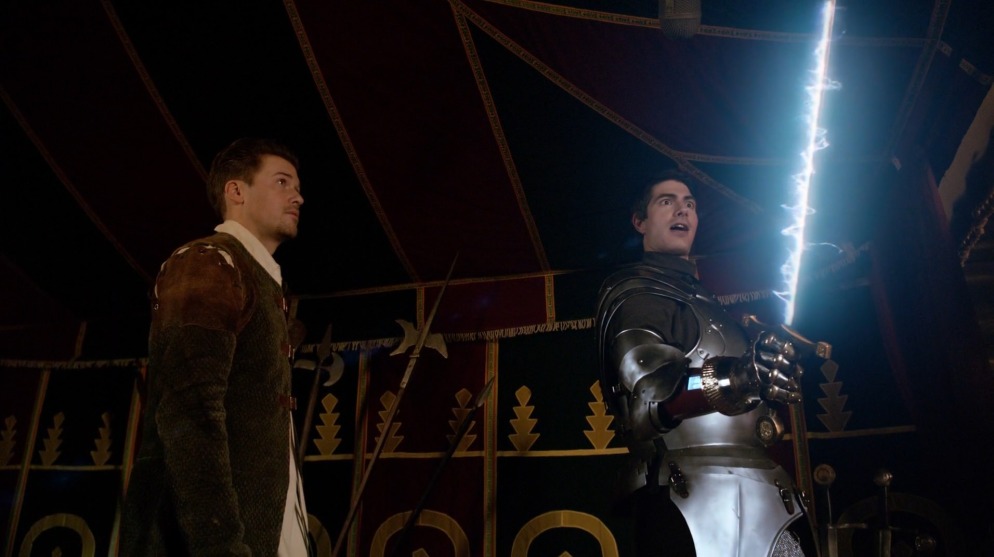 “You may have stolen my role, but I’ve got a light saber!”

After a lot of build up the finale didn’t disappoint, with multiple versions of characters crossing over, several false endings and the satisfying “final” death of the Reverse Flash. Really loved this season.

Really this should be in the bad, but hell: I loved the continued nod and wink to Doctor Who that this show does. Last year the general premise (Time Master on the run from his own people in a stolen ship etc) got flak, so they seemingly decided to go with it and put a hexagonal console in the centre of the Waverider’s deck that everyone gathers around. Thrown in a fob watch reference during the episode where Time Master Rip Hunter has turned himself into a regular human and I was smirking all the way. Why not?

The addition of Vixen in place of Hawkgirl was funny, because they both have the same problem: they’re rather dull. They are all serious and full of strict business, although at least Vixen does develop a little as the season progresses, they’re both just… dull.

Nate on the other hand, wow. What was the point? I guess he was added when they realised Arthur Darvill would be unavailable for the first half of the series, so they needed someone who is knowledgeable about history, but jeez, couldn’t they have just used the ship’s A.I. Gideon instead? Did they have to put in another good-looking sci-fi nerd in? Poor old Ray Palmer had half of his lines nicked. To make matters worse, Nate falls in love with Vixen, even though he knows its doomed to not work out, exactly like Ray did with Hawkgirl last season. So not only is he Ray Palmer all over again (while Ray is still in the show!) but he rehashes Ray’s old plotlines!

They finally visit England, with all its rich actual history, and they come up with a plot surrounding King Arthur and Camelot. Really? Come on…

Minor quibble, but given how much Barry Allen / The Flash screwed everything up by just changing one thing in the timeline, it’s funny how much the Legends screw around with seemingly no effect. Admittedly, the latest batch of time meddling has lead to a “all time at once” cliffhanger, but in general it gets hard sometimes to see Legends as being in the same universe as the Flash…

“Awww… I wanted the sleeping with the co-worker storyline again…”

While the new characters turned out to be either no better or a complete waste, the overall story arc was a great laugh and it has some outstanding episodes. As of this writing I haven’t seen the last few episodes of the co-current seasons of Arrow, Flash and Supergirl, but I doubt they’ll end up topping this for … “Arrow-verse season of the season” or whatever fictional award you want to come up with. Top stuff, and I truly hope they can continue this momentum into Season 3.