Blake’s 7 comes to its ultimate conclusion with the last four episodes of Series 4. Besides the now infamous ending to Episode 13, does the show go out with a bang? Close, I really loved three of the four episodes, which is better than most of this series so far, but it still doesn’t come close to Series 3. Still, a good end, and certainly a memorable one…

Avon and his crew in the Scorpio are determined to take down the Federation once and for all by gathering troops and people-of-interest at their new base before rallying the free planets to their cause. Easier said than done…

“I call this meeting of the weird hair society to order!”

Kerr Avon (Paul Darrow) – Avon never wanted to be a resistance leader, but now he finds himself with the unenviable task of fighting the Earth Federation with himself as the leading force…. Unless he can find another leader…

Vila Restal (Michael Keating) – While bravery may not be his natural reaction, Vila has been around long enough that he can take a risky mission without much prodding… he’ll still complain about it, mind you!

Orac (Peter Tuddenham) – Super intelligent A.I. computer. Despite being created a long time ago now, he’s still more advanced than any other machine out there…

Soolin (Glynis Barber) – Blonde woman who says things from time to time. Happened to come from the planet visited in Episode 13, which at least made her slightly relevant… briefly.

Slave (Peter Tuddenham) – Comedy ship A.I. that seems out of place among his crew, but there you go.

Servalan (Jacqueline Pearce) – Former leader of the Earth Federation who will stop at nothing to climb back to the top of the ladder, including meeting with Avon and his crew a thousand times… a week.

It’s honestly close between two episodes, but I’ll start with Episode 13, “Blake”, as let’s face it, it’s certainly one that sticks in your memory more! Avon has finally found Blake and thinks he is the ideal person to lead the resistance, so he and the crew go to his last known location, Gauda Prime, but are shot down. After a good run around Tarrant is injured and is found by Blake, who has been presented as a uncaring bounty hunter in the episode, and he soon scares Tarrant off. It turns out Blake is building his own resistance group by collecting bounties he thinks would make good soldiers, but before he can explain this he is gunned down by Avon, who believes Tarrant’s story of betrayal. Soon a bunch a Federation guards burst in and everyone is shot down, apart from Avon, who gives a trademark smirk at the camera before we hear laser fire as the credits role. A real tragic end for the Blake’s 7 crew, shockingly so. I obviously knew about it beforehand, how can you not, but to see it in context is still shocking. My only complaint is I feel Avon would have at least heard Blake out before shooting him to death, rather than take Tarrant’s word and shoot him before he can even finish saying “let me explain…”. I like how afterwards Avon just stood transfixed on Blake’s corpse, like he couldn’t quite accept that he had done it either. Either way, that ending sticks with you long after you’ve watched it.

Possibly equally first is the preceding episode, “Warlord”, which saw Avon try and gather the leaders of several Federation-free worlds to form a rebel alliance. Sadly it all goes a bit tits up, as Zukan, tyrannical leader of the planet Betafarl, plants not only bombs in the base but a virus too, and traps everyone but Avon and Soolin, who are off world to return Zukan’s daughter (though in actuality she stayed behind because he has a thing for Tarrant). Servalan, who planned this, then plants a bomb on Zukan’s ship, ending in a three way stand off of Avon demanding Zukan save everyone back in the base before he helps him, and Zukan saying he won’t help unless they save him first (blindly telling himself that his daughter isn’t back at the base because she was supposedly returned safely). Some really great scenes, plus a dark ending when Zukan’s daughter, Zeeona, goes to create the anti-virus and is killed in the process. It’s the way Avon is fine sending her down there, probably knowing she’ll die, and then letting Tarrant go down later, knowing what he’ll find. It’s cold, and actually made me feel sorry for Tarrant, which is quite hard…

Episode 10, “Gold”, is a bit of fun really. It’s all about a gold heist from a fake pleasure cruise, set up by Avon’s “old friend” (more of a vague acquaintance) Keiller. As you’d imagine, it’s goes wrong more than it goes right, but it does end with a stand off between Servalan (of course!) with guards and money, and Avon and co. with the gold and a regretful Keiller. It all seems to go smoothly (apart for Keiller…) until they get back and find out the money is useless, so all they did was give Servalan a vast amount of money for no reason. Avon laughs uncontrollably, throwing money in the air, almost in respect to Servalan for getting one over on them. It’s a fun episode.

Just seeing this picture annoys me…

Episode 11, “Orbit”, drove me up the wall. Avon meets famed scientist Egrorian and his slow-witted assistant and sets up a trade: Orac for a machine that can destroy a planet from any distance. It’s all a scam set up by Servalan (of course!) and soon Avon and Villa, who went down to the lab together, are stuck in free fall unless they can get rid of some excess weight that Egrorian has snuck on board. My main problem, and it’s a big one, is Egrorian himself over-acts to the point of annoyance. I get he’s supposed to be eccentric, but Jesus… It’s one of those performances that just kept reminding me that the person was an actor having a fun time on a set rather than allowing me to focus on the episode and enjoy it. It’s a shame because there was a funny / disturbing scene when Orac declared that Villa weighted the exact amount they needed to cut, leading to Avon hunting his long (long!) time ally in the cargo hold, but even that was ruined by Avon finding the tiny cube of super-condensed material that was weighing them down and using a child’s Tonka truck to push it along the floor to the airlock. It immediately turned the tense scene into a visual gag. Ah well… 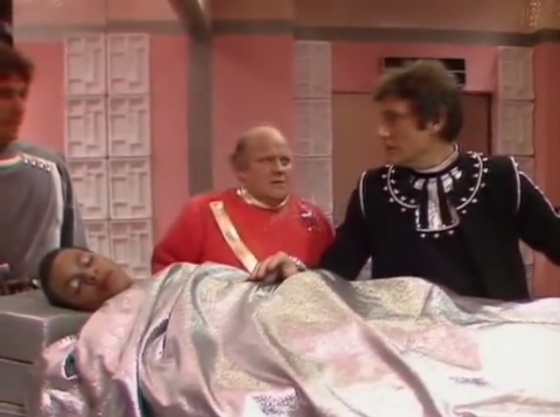 Blake’s 7, as a whole, comes to a close with a great double bill of episodes, and a dark and grim ending. Series 4 as a whole was a lot weaker than Series 3, and probably the first two as well (though it’s been a while) but at least Blake’s 7 as a whole went out with a bang! (or should be with a laser zap?)