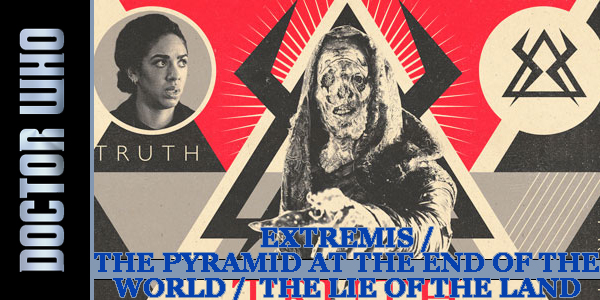 Doctor Who does its first three-parter since, arguably in some people’s minds, the end of Series 3, and in doing so completely breaks my header template… Oh well! The modern three-part stories are roughly the same length as the classic six part stories you got mostly in the 70s, but this is looser than those. Really it feels like a two part story with Extremis serving as a prologue. Either way it was an entertaining story with some good, and new, villains, though the ending felt a tad rushed and cliché. Let’s take a deeper look!

The Vatican asks The Doctor to investigate a mysterious book called the Veritas. All who read the Veritas immediately kill themselves. When a translation of the Veritas is leaked online, the Doctor must face up to the inevitable truth…

The Doctor (Peter Capaldi) – The Doctor is now not only stuck on Earth guarding a vault that we now know contains his old nemesis Missy / The Master, but he is now blind. Terrified of his enemies finding out, he has very little time to make compensations as a new invasion looms…

Bill Potts (Pearl Mackie) – Bill is doing that modern companion thing of trying to lead a normal life on Earth while also occasionally travelling to crazy places with The Doctor. What happened to the good old days of people living on the ship? Anyway, stuff happens!

Nardole (Matt Lucas) – Nardole has been following The Doctor around for a while now, apparently at the behest of River Song. He is determined to see The Doctor fulfil his oath to guard Missy in the vault… though there are some legitimate excuses as to why he stops…

Missy (Michelle Gomez) – The latest incarnation of The Doctor’s old nemesis The Master, Missy is very much evil, though is seemingly repenting her/his old actions while being locked in a vault (though lets face it, it won’t last…)

The Monks – Invading aliens who run countless virtual reality simulations of the place they want to invade before invading at exactly the right time… then they have to get permission to take over before they actually do. After that, they just hang around a bit, and then bugger off when their plan fails. That’s a lot of effort for little gain, really… 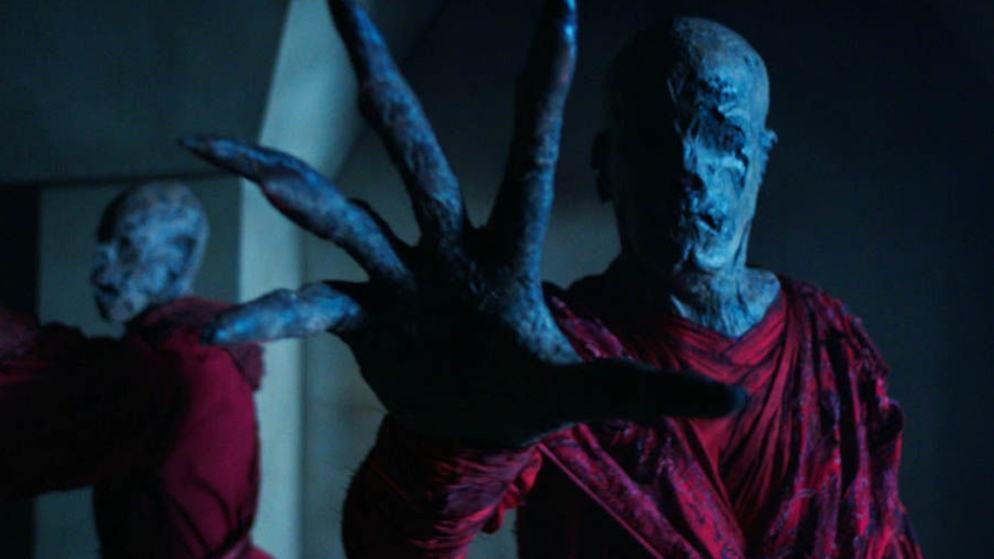 Extremis is a very fun concept. It takes place pretty much entirely within The Monks’ virtual framework, with all the characters slowly realising that they’re fake, leading to them taking their own “lives”. When The Doctor finds out, however, he uses The Monks’ technology against them and sends a recording of all his virtual self has seen to the real Doctor so he can prepare. It’s a weird concept, but it was fun to piece it all together and it set things up nicely for the next episode.

The Pyramid at the End of the World, long title aside, was also really good. The Monks have landed in a giant pyramid (because… monks and ancient Egypt go well together, I guess?) and are waiting for a human to give them consent to take over the planet in order to save them from a world-ending threat. Several people, including generals of the big three super powers of America, China and Russia, are all killed because their consent was made out of fear or strategy, and not legitimate love, so in terms of invasions, this is a nice one! Anyway, turns out the world-ending threat is an accidental super-bacteria created in a lab that gets out and soon wipes out the population, but The Doctor manages to stop it, though seemingly at the cost of his own life… at least until Bill gives The Monks her consent if they gave The Doctor is sight back, which they deem acceptable due to it coming from love, and boom. End of episode. Thumbs up for several great and tense scenes, and although the Monks’ invasion strategy is a bit odd to say the least, it did lead to some interesting stuff.

Although I didn’t like a lot about the third part of the so-called trilogy, I did enjoy the scenes with Missy in the vault, very reminiscent of Hannibal Lector. In fact the flashbacks in Extremis showing how Missy came to be locked in the vault and The Doctor tasked with looking over it for a thousand years was great as well. That being said, Missy shedding a tear at the thought of all those she had killed in the past just made me think of Steven Moffat doing the exact same fake-out with Davros in Series 9, so I’m not even remotely buying it…

Seeing The Doctor so vulnerable and afraid while being blind was an interesting take on the character, and I was beginning to think it might stick until he regenerates. After all his “sonic sunglasses” were giving him a small hand in seeing, at least enough that he could still be himself for the most part. Still, great stuff, as always from Mr. Capaldi. 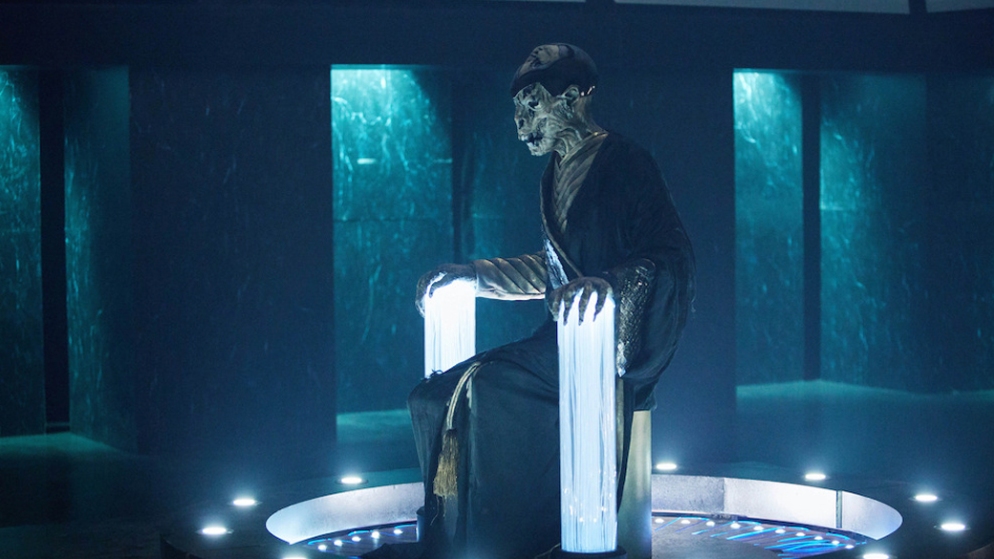 Wasn’t a fan of The Lie of the Land. I don’t mind alternate timeline-y stuff, and I like the nods to 1984 (the book/film, not the year in general), but there were two things that really annoyed me. First, The Doctor, in order to make sure Bill is really on his side and not brainwashed like the rest of society, pretty much mentally tortures her to the point where she is so convinced of his betrayal that she grabs a gun from a guard and tries to shoot him dead, which leads to a regeneration fake-out. Now… first off, I’m pretty sure Nardole, who took Bill to see him, could probably vouch for her given all she did to visit him. Secondly The Doctor hasn’t told Bill about regeneration yet, in fact a scene in an earlier episode had the Doctor mention the word and then brush it off when Bill inquires what he meant by it. This means the whole fake regeneration was clearly put in solely to feature in the coming soon trailer at the start of the series in order to get people talking about “will he regenerate in the series?!” questions, and nothing more.

The other thing that annoyed me was the ending. The Monks’ hypnotising broadcast is stopped by Bill grabbing hold of the (really creepy looking) receptor Monk … person, and then her imaginary ideal version of her long-dead Mum frees everyone from control. As soon as this happens The Monks bugger off and we get a brief scene to show that no one on Earth remembers any of it. Great. Three whole episodes with a quick “companion’s human emotion is the most powerful tool of all” cliché and no actual lasting consequences, beyond The Doctor having his sight back. After two great episodes that was a bit … shit, really.

Also, all this world-ending alien invasion threats and no UNIT? After all the work they’ve done in setting up a new version of UNIT with Osgood and Kate Stewart and they don’t even slightly feature? Weird!

Extremis finally answers the question of why Nardole starting following The Doctor around, in this case she told him to stop him from doing something extreme after her death (given The Husbands of River Song features the last meeting between her and The Doctor, from the Doctor’s point of view) It also answers the question of who is in the vault and why, that being Missy and so she can repent (rather than the original goal of just guarding her corpse). Missy in fact makes a reference to The Doctor’s retirement on Darillium with River and offers her condolences on her death (which technically The Doctor saw several lifetimes ago in the 10th Doctor two parter Silence in the Library / Forest of the Dead)

The method of story telling in Extremis (that being what we see aren’t really the actual versions of the characters) reminded me greatly of the Eighth Doctor audio classic “The Natural History of Fear”, which had a similar story form.

A small nod is seen in Lie of the Land, where Bill watches one of The Doctor’s broadcasts on a TV in Magpie Electircal shop, a fake brand of TV manufacturer that keeps popping up throughout the series.

It’s a shame the three-part story ends on a bit of a sour note, because the two episodes before hand were quite unique and really fun to watch, not to mention they set up The Monks as an interesting new foe. Ah well, this series has been firing on all cylinders, as the phrase goes, so a second bad episode out of the eight so far isn’t the end of the world, it’s just a shame it had to be the finale of a really fun trio…