To celebrate the last part of my review of the Original Gundam series going up on the main review site, I thought I’d review the first Gundam game I ever played over here on Hogan Game Reviews. Dynasty Warriors: Gundam was not only the first Gundam game I played, but it introduced me to the world of Gundam outside of Wing and Seed, the only two series I’d seen at that point. Ignoring all that, though, what’s it like to play now?

Dynasty Warriors: Gundam was first released in Japan under the title “Gundam Musou” in March 2007. It was later released in the US in August that year, and finally in Europe November 07.

It was the first game made by the Dynasty / Samurai Warriors team at Omega Force based off of an anime property, something that would become something of a speciality later down the line for them. It features pilots and mobile suits from Mobile Suit Gundam, Zeta Gundam, ZZ Gundam, G Gundam, Turn-A Gundam and Gundam Wing.

The Zeta Gundam tears through the competition!

Following the tradition seen in the other Warriors games, DW: Gundam’s core gameplay is the same hack n’ slash gameplay commonly found in those titles. You press one button several times to do a combo, or alternate between that button and a second button for more combos, and so on. There are also special moves, a long-range fire button and plenty of jumping, dashing and even flying in some cases. Given my love for the Warriors franchises, I hope that didn’t come across as dismissive of the controls, I do love a good Warriors 1 vs. 1000 game!

G Gundam! … Man, I had no idea what was going on here when I first played…

The graphics still look quite good, at least the models anyway. They don’t have any special cell-shading effects or anything, but they look bright and colourful. The actual groups and draw distance is obviously not great, but for a (as I write this) 10 year old game, it doesn’t look to bad.

The background music is all generic electric guitars and stuff, very Warriors but not very memorable. What is memorable is that they got the original Ocean dub cast back in to resume voicing the characters they did in the TV show, with one or two exceptions. It’s always very nostalgic to hear them, and welcome addition to the game.

The two main modes are “Official Mode” and “Original Mode”. Official mode sees you play missions from the Universal Century timeline, specifically ones from Gundam, Zeta Gundam and ZZ Gundam, and features a system where you can save certain characters from their canon deaths and have them appear later in the story. Where as Original Mode is a fictional story featuring pilots and suits from all six series featured in the game and revolves around the plot of a mysterious planet that’s heading for Earth, with a newly created Musha Gundam as the final boss. Given its much smaller roster, the Original mode has some really fun stories to tell, splitting the characters into groups of three or four, with each group getting a story mode. 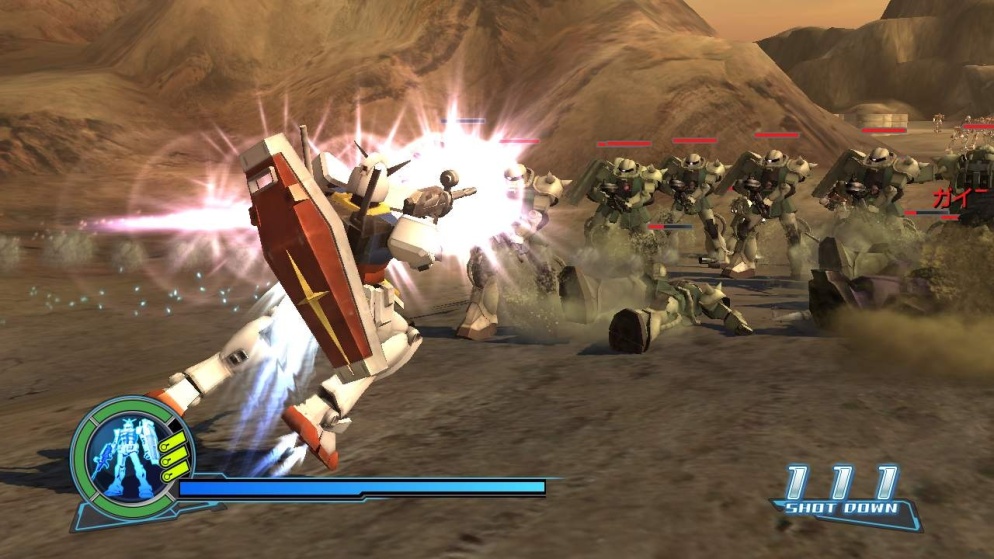 As I said in the intro, back then I had only watched Wing and the original Seed series, so it was mostly my love of Dynasty Warriors that got me to try the demo (featuring playable Wing Gundam, the English language publishers knew what they were doing!) once I did I was convinced and when the actual game came out not only was it really fun, but discovering the casts of the other series was great. All the UC stuff was interesting, the G Gundam stuff was confusing (even more so when I looked it up!) but it was all excitingly mixed in with fun Warriors gameplay. Loved the story too!

The Turn-A Gundam… now there’s a series that will be interesting to review, one day…

Obviously now there’s Dynasty Warriors: Gundam Reborn, a third sequel to this game, playing the original (despite a smirk at the Original story mode) wasn’t that great. Many of the suits don’t have proper movesets, many series are completely absent and the graphics are… below par. It’s one of the reasons I always put a then and now section, as the criticisms here are unfair given the game is a decade old… Still, I wouldn’t play it again.