When the big 50th Anniversary stuff was going on in fandom, I kept hearing rumours of an Eighth Doctor regeneration, and I refused to believe it. I wanted it so much, but was resigned to the thought that it would most likely one day happen on a Big Finish audio release. Then, all of a sudden, this minisode was released, and I couldn’t believe my eyes! Paul McGann was back playing The Doctor, and even though it only lasts 7 minutes, it’s a glorious 7 minutes! Let’s take a good look!

While skirting around the edges of the Time War, The Doctor is still trying to help those who are desperately in need. How much longer, though, can he remain out of the conflict?

He’s a Doctor, but probably not the one you were expecting!

Ohila (Clare Higgins) – A member of the Sisterhood of Karn, worried that the universe itself is at the very brink of destruction, and the only person who could stop it is a man sworn to not take part…

Plus… er… some background Sisterhood of Karn members!

The Doctor having a bad day… Bring him some knitting!

I could just copy and paste what I said about Paul McGann’s portrayal of the Doctor from my TV movie here, because he’s just as charismatic, likable and able to be serious as he was then. His sarcastic jabs at the Sisterhood of Karn and Ohila are so fun to watch.

The idea that the Eighth Doctor didn’t fight in the war and actually refused made sense, he’s still very much The Doctor, so of course he didn’t fight in a war between his people and The Daleks. I loved that the war had gotten so bad that someone chose death instead of being rescued by a Time Lord, and that in the end the final message is that The Doctor needed to change. Ohila’s words, including there being “so little of” the universe left adds to it as well.

Then we get the regeneration scene, after so… so many years, Paul McGann gets to put a bookend on his Doctor’s life (now incredibly long thanks to the sheer amount of audios and comics, not to mention books if you want to include them!) He thanks his audio companions, which is a nice nod to the fact that the Eighth Doctor played by Paul McGann is pretty much a Big Finish only character, and then drinks an elixir that will make him a warrior, rather than a Doctor. A short shot of a younger John Hurt in a brassy reflection shows us his next form and he heads off to war, after symbolically taking Cass’s bandoleer and places it around himself. Great stuff. 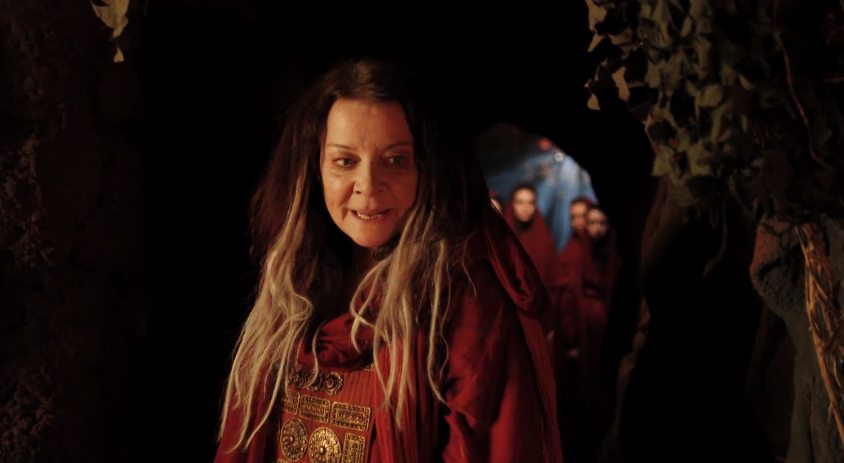 Oh look, a screenshot that doesn’t have Paul McGann in it!

Nothing to say here. It’s only seven minutes, and they’re all good!

and there we have it, at long… long last!

The Sisterhood of Karn first appeared in the Fourth Doctor TV story “The Brain of Morbius”, and would return alongside Morbius in the two-part Big Finish Eighth Doctor audio story “Sisters of the Flame / The Vengeance of Morbius”. The Twelfth Doctor later meets Ohila on Karn in the prologue to the TV two-parter “The Magician’s Apprentice / The Witch’s Familiar”.

Due to being written in 2013, the Eighth Doctor’s companions from the “Doom Coalition” audio series aren’t name checked. That being said, none of his comic or book companions are named either, so depending on what you like to include in your own canon, it was just the Doctor naming some that came to mind, I guess! Others have speculated that, apart from Charley, all the companions he named died in front of him, one way or another, and so maybe Charley’s final fate is rather bleak as well and he was naming those he felt he’d let down. Maybe we’ll find out one day!

It’s hard to dislike anything that’s done in these 7 minutes. It brings back the Eighth Doctor, gives him great lines, and then gives him a great send-off. Even the Big Finish audio companions get a name check! I was ecstatic at the time, and I still can’t watch this without a huge grin on my face.