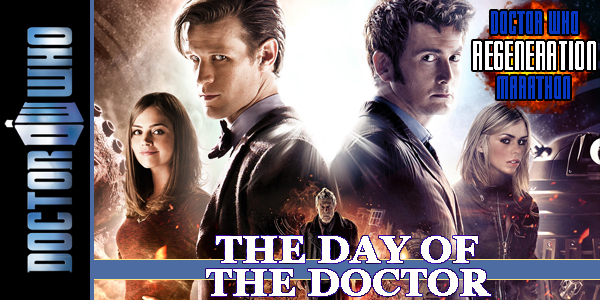 It’s kind of a shame to cover this in the “Regeneration Marathon”, because really the War Doctor’s regeneration isn’t a big part of the story at all, and really this would be better suited for a hypothetical multi-Doctor story marathon, but I said I’d cover each regeneration in order, so here we go! It has the Tenth and Eleventh Doctors in key roles, John Hurt’s newly added War Doctor, plus Zygons, Daleks and an on screen appearance from Tom Baker himself! Throw in cameos by all other past and future Doctors (at that point) and you have a great 50th Anniversary story. So let’s take a look!

In the midst of the Time War between the Time Lords and the Daleks, the War Doctor — a hitherto-unknown incarnation of the Doctor — decides to trigger an ancient weapon called The Moment in order to destroy both sides completely. The Moment questions whether mass killing is the best option for ending the Time War and prescribes the Doctor’s punishment if he does so — he will survive while the rest of his race dies. The Moment offers to show the Doctor what this will turn him into and opens a fissure linking him to the Tenth and Eleventh Doctors. The three Doctors converge in the year 1562, where the Tenth Doctor has been tracking down a Zygon…

Two Doctors for the price of one!

The Doctor (Matt Smith) – Having recently dipped into his own timestream and seen visions of a past incarnation he’d rather have forgotten, The Doctor and Clara have resumed normal duty, with the latter ready to join him for a new adventure…

The Doctor (David Tennant) – The Doctor is ignoring his fate. He knows his “song will end soon”, but he’d rather have a bit of fun and travel around, saving people like usual. This has landed him in 1562, where Elizabeth I is pining for his attention…

The War Doctor (John Hurt) – When the man formally known as The Doctor fought in the Time War, he rejected all that made him who he was in favour of ending the madness. He now stands on the edge of the cliff, one button push away from destroying the Daleks and his own people…

Clara Oswald (Jenna Coleman) – Clara is a teacher at Cole Hill School, and on the side likes to travel in time and space with The Doctor. She just got word of the Time Lord’s arrival and is looking forward to where it brings her…

The Moment (Billie Piper) – The Moment is a sentient Time Lord weapon, capable of eradicating great numbers of people at the push of a button. The problem with sentient weapons of mass destruction is when they gain a conscious… That and when they take the form of a past (or from the War Doctor’s perspective, future) companion…

Kate Stewart (Jemma Redgrave) – Current leader of UNIT, much like her father before her. She has been having trouble with mysterious alien paintings and shape-shifting Zygons… so about the usual week.

Osgood (Ingrid Oliver) – Osgood is also the daughter of a former UNIT member, though admittedly not as well regarded one. She is a great scientist, though!

Queen Elizabeth I (Joanna Page) – Queen of England and her related realms, she is currently having a bit of fling with the 10th incarnation (to use the name) of the Doctor…

The Zygons (Various) – Shape-shifting aliens, the Zygons are looking for a new home, and Earth is just the place for them to fit in…

The Daleks (Nicholas Briggs) – Evil, genocidal mutants gliding about in pepper-pot like machines. The ones featured here are from the Time War, where they nearly brought the universe to its end in the name of conquering the Time Lords.

The Curator (Tom Baker) – A mysterious man, a face not unlike a certain past version of the Doctor. He watches over the museum, waiting for a chance to pass on some information…

This story existed purely to celebrate the 50th Anniversary of Doctor Who, and in that sense “The Day of the Doctor” succeeds on every level. Hell, even as a regular story I’d still give it high marks!

The Eleventh and Tenth Doctors work well as a duo, which makes sense since they were so similar in a lot of ways, and John Hurt’s new War Doctor is the perfect straight man, making a great trio. That’s really what lies in the heart of this story, as the title suggests, it’s all about the Doctor and how he fell from grace, and then at the last moment regained his soul, all thanks to two future incarnations of himself, one that was still full of guilt, and one that managed to move on. By the time the trio are back on Gallifrey and ready to destroy everything again, they had all decided it was the right call. Soon Clara changes their mind (of course she does!) and they actually save Gallifrey by teaming up with the other nine Doctors, plus the future Twelfth Doctor! That scene still gives me goosebumps. Afterwards, the War Doctor goes back into his TARDIS and soon regenerates, as if his body didn’t need to hold out any more, while the other two just go back about their business… that is until a familiar booming voice is heard in the background and out walks Tom Baker!

In a short exchange he implies to the Eleventh Doctor that Gallifrey was saved and then strolls off. No real explanation is give to who he really is, but that’s fine. It was good to see him in the flesh on the show’s 50th Anniversary. It then ends with The Doctor in a dream, where he and all his past selves are looking upwards towards Gallifrey as a nice bit of dialogue is read out by Matt Smith about “finally I have a goal, and a set path to follow” and that’s his home. The final scene of every incarnation standing next to each other while dramatic music plays is still such a fantastic ending to the episode, and to a 50th Anniversary special in general.

While all this Time War and Doctor stuff is going on, there is a side story involving the returning Zygons and UNIT… oh and Queen Elizabeth I, because that jokey line the Tenth Doctor gives at the start of his regeneration story had to be followed up on, I guess (we’ll get to that in a couple of days!) Obviously they’re not the focus of the story, but the effects are good and Kate Stewart and Osgood are really good characters, so it was fun to see them again. I do also enjoy how unbothered the War Doctor is during the scenes with the Zygons, as if a Zygon invasion of Earth was just a drop in the ocean compared to what he’s been through recently… which of course it was!

Oh and The War Doctor getting angry at the Tenth and Eleventh Doctors using their sonic screwdrivers as weapons still makes me laugh. “There you go again! They’re screwdrivers! What are going to do, assemble a cabinet at them?” Great stuff, slightly ruined by the War Doctor then using his own screwdriver as a weapon later, but whatever.

This isn’t a bad, by the way, I just only had four pictures and wanted to make sure to get “The Curator” in!

The only real bad is the Clara gets yet another stupid accolade attached to her. She has previously saved every incarnation of the Doctor at least once, and was the reason he chose his iconic Type-40 TARDIS in the first place, and now she’s the reason The Doctor didn’t destroy his home planet and people and instead saved them. You’d think that’d be enough, but there’s more to come…

But yeah, nothing can dent how much fun this story is!

You don’t actually see the Ninth Doctor before it cuts away, which is a shame, but at least we now know that’s who he regenerated into. No more “unknown” Doctors!

I would be here forever if I had to list all the little cameos and appearances. Like the scene in the Gallifrey War Council, where all (eventual) 13 incarnations of the Doctor appear, each of the first nine are represented by archive footage and soundbites from other stories, but I’m not going to sit and list them (or to be fair, look them up on the TARDIS Wikia…), the same goes for the list of past companions that had photos pinned on the notice board at UNIT. In the same UNIT “Black Archive” there are a bunch of props from past stories as well.

Obviously, beyond the Time War related things like the War Doctor, Daleks and “The Moment”, I’ll mention that this is the Zygon’s second TV appearance since their debut in the Fourth Doctor TV Story “Terror of the Zygons”, though they did appear in several books and audio stories a couple of times in between. The consequences of the Zygons and UNIT having to enter into an agreement is seen in the Twelfth Doctor two-part story “The Zygon Invasion / The Zygon Inversion”.

This story also fills in a gap pertaining to the Tenth Doctor and Elizabeth I. In the story “The Shakespeare Code”, Elizabeth I tries to have the Doctor killed, which he has no idea why she would. In his last story, “The End of Time”, the Doctor boasts that he married Elizabeth I in his down time before facing his fate. This fills in that gap, presumably with the Queen mad that he married her and then left.

There were also some fun nods to the original Anniversary story “The Three Doctors”, as Clara exclaims that they’re “three of them”, to which Kate Stewart replies that “we have a precedent for that”, later asking for a file code-named “Cromer”, which is a reference to the Brigadier’s original guess as to where he, the other UNIT staff and the Doctors had landed in the same story. (there is also another nod to the UNIT dating problem as Kate says “it may be filed under the 70s or 80s, depending on the dating protocol”, or words to that effect.)

Plenty of other little nods were made as well, like the Eleventh Doctor saying he saw Trenzalore (TV story “The Name of the Doctor”), and the Tenth Doctor saying he “didn’t want to go” (his last words in “The End of Time”). There is a mention of the Sycorax (Tenth Doctor story “The Christmas Invasion”), The Moment, upon taking the form of Rose, calls herself “Bad Wolf” (The entire Series 1 featuring the Ninth Doctor), and so on.

As I said in the opening line, it’s a shame this has come up in the “Regeneration Marathon”, as it’s clearly a big anniversary, multi-Doctor story, and that the War Doctor’s regeneration is but a small part of it. Still, The Day of the Doctor in general is a fantastic story, funny, pays homage to the past and sets up the future, all in an hour and a half. I could watch it again tomorrow and be perfectly happy.