Not even a year later (release-wise) from the previous debut story, we have David Tennant’s debut in the role, as well as the first Doctor Who Christmas Special (of the modern era, anyway…) The Christmas Invasion, as the title suggests, certainly doesn’t forget to remind you of what time of the year it was, but it at least doesn’t forget to tell a story about how the 10th Doctor came to be, and how Rose managed to adapt to the sudden change. So… let’s take a look! Ho-ho-ho! (it’s September as I write this…)

It’s Christmas Eve and high above London, the alien Sycorax are holding the Earth for ransom. The Tenth Doctor must recover from his regeneration in time to save the human race from slavery.

The Doctor (David Tennant) – The Doctor has regenerated, and with it has come a different kind of regeneration crisis, one that has left him in a sort-of coma… and wouldn’t you know it, aliens have just invaded Earth! Typical!

Rose Tyler (Billie Piper) – Rose is confused, the man she thought she knew and loved has changed into someone completely different… literally! Still, she can’t leave him behind, she needs to look after him in his time of need…

Jackie Tyler (Camille Coduri) – Jackie is just as confused as Rose is when the new Doctor pops out of the TARDIS, and then collapses. Still, she can’t say no to helping him… well, I mean, she could, but Rose wouldn’t listen anyway…

Mickey Smith (Noel Clark) – Mickey is happy to see Rose again, though he is feeling further and further away from her. Still, it’s Christmas! Time to celebrate, and… nearly get killed by Christmas trees! …?

The Sycorax (Sean Glider and others) – The Sycorax are a race of quite savage and simple people that power their technology via blood. This has given them quite a bit of useful tech to control people, so long as they get a blood sample beforehand…

Harriet Jones (Penelope Wilton) – Harriet Jones is the current PM of Great Britain, and has been leading the country into a new golden age. Sadly for her though, aliens have invaded London… again.

Daniel Llewellyn (Daniel Evans) – A British scientist who had a hand in making a special satellite/probe that got sent to Mars… only for it to be snagged by the Sycorax and used against them… Still, not his fault, that’s a bit hard to predict!

Major Blake (Chu Omambala) – A higher-up in UNIT, Major Blake has the unenviable job of trying to fight off an alien invasion without The Doctor around, something his predecessors often didn’t have to do!

I think the main thing that this gets right is something that hadn’t really been done since the very first regeneration, and that’s having a companion genuinely freak out at the new version of The Doctor that’s suddenly appeared (I mean, Peri had every right to freak out about her new Doctor, so that doesn’t really count!). If you toss in the Children in Need special set just before this, which has Rose pretty much cowering away from this new person while admitting she wants the old one back (complete with a heartbroken looking David Tennant as she says it, not what you want to hear after you’ve just regenerated! … I assume) and you have an interesting, and logical, reaction, that creates some good drama. Rose looks after The Doctor, keeping him in bed, and eventually taking him back to the TARDIS, but she still laments that its not her Doctor any more.

Of course this leads to the big moment on the Sycorax ship, where The Doctor comes round and saves the day with a still entertainingly wild monologue and a sword fight. Tennant is just a swirl of energy and smiles, quite the opposite of his predecessor, which makes sense as this is the first Doctor to be born “The Doctor” since McGann’s 8th. There is still baggage, but it’s mostly behind him now, and he’s finally able to go back to having a bit of fun with a companion. It’s another one of those scenes that works really well retroactively. After its all said and done The Doctor and Rose head off for adventures new.

Before that though is Harriet Jones, the Prime Minister, sanctioning the destruction of the now-fleeing Sycorax ship, causing The Doctor to get mad. He decides to bring down her entire political career, and successfully does so. It still seems a little out of character given we know beforehand that she was supposed to have a long term in office, but it also makes sense because she technically killed thousands, if not hundreds of thousands, for no real reason, so… Either way, it’s a great scene that gives this Doctor a chance to show his serious side after having just been a ball of fun energy.

The Sycorax were a bit of a joke for a lot of the runtime, but the thought of controlling a third of the population and getting them to simultaneously jump to their deaths is an effective bargaining tool. The shots of lines of people being one step away from jumping is a scary sight, even if it’s later revealed that their tech doesn’t actually work that well…

It was nice to see UNIT, even though it’s not really a UNIT we recognise. Jackie and Mickey are also good for a bit of banter, the former especially giving some humour to certain scenes. Mickey shows some bravery too, which is a step up from how he was shown just twelve or so episodes ago…

All the extra cast in one shot! Handy.

I think Mr. Davies got a bit too carried away with the Christmas thing. I don’t mean people talking about Christmas or it being set at Christmas, but I mean the “Roboforms” arriving and using Santa disguises with killer musical instruments, or killer Christmas trees… I mean, it was just there because “Christmas”, and that’s all I get from those scenes now. Maybe it has something to do with there having been so many Christmas episodes now, I don’t know… I do like the idea of the Roboforms, that they’re like pilot fish and try and invade places that are about to be invaded by much larger forces than they are, to get in quick and nab some stuff before it all gets wrecked, but sadly they’re just robo-santas and generally a Christmas-themed gag.

I know it sounds like I’m bashing a Christmas special for having too much Christmas in it, but again future Who Christmas stories are a bit more subtle… while some are even less so, so… look out for those later!

Harriet Jones is amusing in her daft posh woman way, but her recurring gag of her saying “Harriet Jones, Prime Minister” as an introduction, leading to whoever she’s talking to responding “Yes, I know who you are” is far too overused. Once or twice, and then having the Sycorax do it, that’d be fine, but yeah… overdone. Plus I couldn’t get the idea of a posh female Prime Minister who doesn’t really know what she’s doing being a rather good parody of our current leader (without the golden age part…) but I won’t hold that against something that was made over a decade ago! 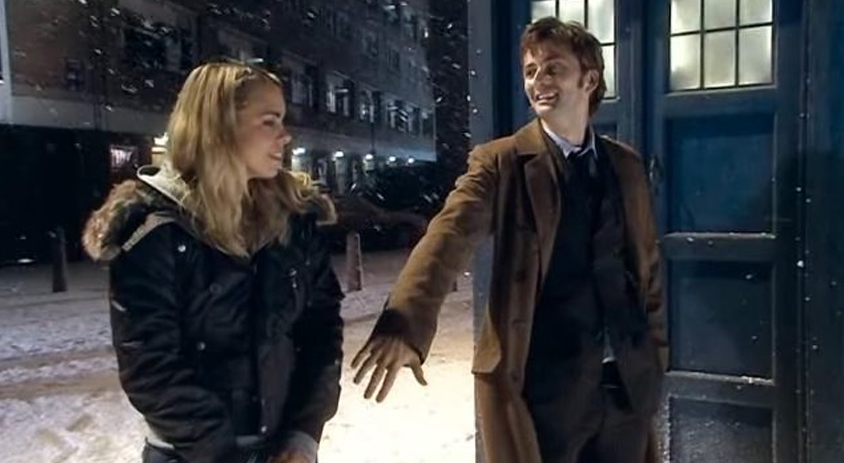 Beyond the obvious of carrying on directly from “The Parting of the Ways”, there are a few connections to be found (as well as the first official use of the word “Torchwood”, which would become the “arc phrase” for the following series, and obviously lead to something far greater!)

The Doctor’s knowledge of the Sycorax and their blood control comes from “Harvest of the Sycorax”, a Seventh Doctor audio drama (retroactively, of course!). The ramifications of this Sycorax ship being destroyed is seen in the 10th Doctor comic story “The Widow’s Curse”.

Harriet Jones first appeared in the Ninth Doctor TV story “Aliens of London / World War Three”, and would later reappear in the Tenth Doctor TV story “The Stolen Earth”. It’s also funny to note that by deposing Harriet Jones The Doctor created a power vacuum eventually filled by The Master, who then eventually leads The Tenth Doctor to his death thanks to a regeneration/resurrection gone wrong brought about by his failed plan as Prime Minister. So by changing history out of spite, he may have caused his own death!

Oh, and the Roboforms return in the following year’s Christmas special, “The Runaway Bride”… hooray?

The Christmas Invasion is sometimes a little too on-the-nose for my liking, but that doesn’t change the fact that it’s a very fun, entertaining story that does justice to both the idea of Regeneration and what effect it has on companions, and also just a great debut for David Tennant as The Doctor, he really is a tour de force of energy in his scene with the Sycorax, and then disturbingly serious and angry when dealing with Harriet Jones. While I can’t quite give it top marks, it’s certainly worthy of high praise!