Dissidia was released at the start of the year, close to Dragon Ball FighterZ and during a time I was still playing Assassin’s Creed Origins, so I passed on it. I had fun with the demo, but I wasn’t convinced it was “must buy”, and it seems I was right, at least at full price. A few months ago I picked it up for £15, and more than got my moneys worth, but I think at £40 I would have felt it lacked in content too much. In any case, let’s have a closer look at the game…

A trio of terrible knights!

The game features heroes and villains from all 15 Final Fantasy games, plus a couple from the spin-off titles. 28 total fighters are included from the get go, with more being added as DLC later. 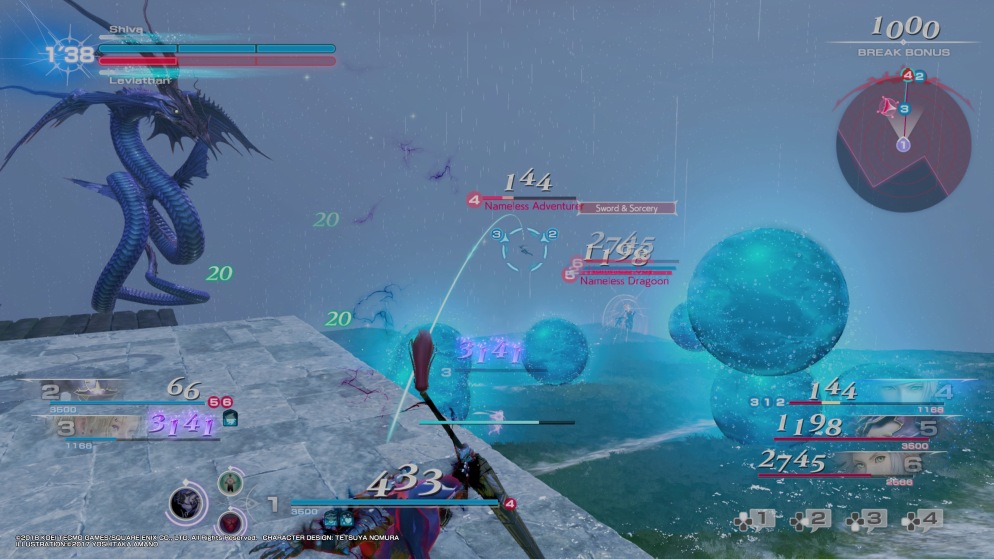 So much HUD, so little time to think…

The gameplay style is often where people fall down, as it isn’t standard fighting game fare. For the most part it’s three vs. three in a large environment based off of one of the games, and you attack with either “Bravery Attacks” or “HP Attacks”, the former increases your bravery while lowering your opponents, the latter does actual damage to their HP, but only when their bravery is low enough does it do any proper damage, even better if their Bravery is “broken”, leaving them wide open. It’s a strange set up that takes some getting used to, but once you do it’s fine. Along with Bravery and HP attacks, you can also cast magic and have access to character specific EX attacks, which can range from buffs, negative status effects for opponents, or just another flat out HP attack.

During the fight large “Summoning Crystals” appear, and if your team breaks it and gains enough power, they can use a summon, which will not only attack your rival team, but can offer buffs for your side as well. A second type of battle is also available, where each team has a “core” that they must protect while trying to destroy their opponents core, but the cores are only able to be attacked if none of the opposing team is within a certain radius of it. It’s okay, but I prefer the straight up fights myself, especially as I’m mostly with A.I. against A.I.

As for the modes in general, there are standard Arcade type modes, where you run a gauntlet of opponents, choosing which to take and how hard the difficulty level, and a story mode (see below!), plus a boss rush (based off of bosses from the story mode) and such. Then obviously there is online, which I’m never a fan of and sure enough, didn’t touch much, but it’s there and all reports are that it’s often stable. Then we have stuff like random loot crate style things (that only give you cosmetic / audio items, thankfully!) and a straight up shop, where you can buy costumes and new background music without taking a spin of a random wheel.

Shiva turns the battlefield into an iceberg.

The graphics, as you’d hope nowadays, are great. The character models maybe aren’t the most detailed ever (there having to be six of them on screen all the time and all) but they’re still great, and the stages… wow. Particularly anything outdoors, the grass and tree details and natural lighting is often stunning. Fire and ice magic effects are also very good, especially when some of the summons have been… well, summoned.

Sound-wise I can’t complain either. It has a few original tracks and a tonne of music from Final Fantasy games from all over, it has both original Japanese and English voice options, and the sound effects are all authentic sounding for their series, and well mixed with everything else going on.

The story, and indeed story mode, is pretty basic. You play the arcade mode to unlock points used to then unlock chapters in the story mode. This means sometimes you’ll play a bunch only to end up watching a couple of cutscenes, but hey-ho. The actual story is much the same as it was in the two PSP games, and makes out that this a sequel. In the original games warriors from all over (the different Final Fantasy games) were called to a dimension to fight on behalf of two God-like beings called Cosmos and Chaos, with that story eventually ending with the realm destroyed and brought to “peace”. Here the characters (baring Noctis, as he wasn’t around back then) assume that they failed and have been called to the same dimension for the same reasons, but it turns out they are summoned by Materia, Goddess of Protection, and Spiritus, God of Destruction, depending whether they’re heroes or villains. This leads to some fun cutscenes of characters fighting each other from across the franchise history, which are well animated and voiced (mostly, some English voices are on the “far too monotone” side), so it’s fun. We also have regular battles and boss fights, where you fight the summons with your party of three. The final battle is against a unique boss as all warriors of Materia and Spiritus realise their is a bigger threat, and boy is that boss fight a major pain in the arse… 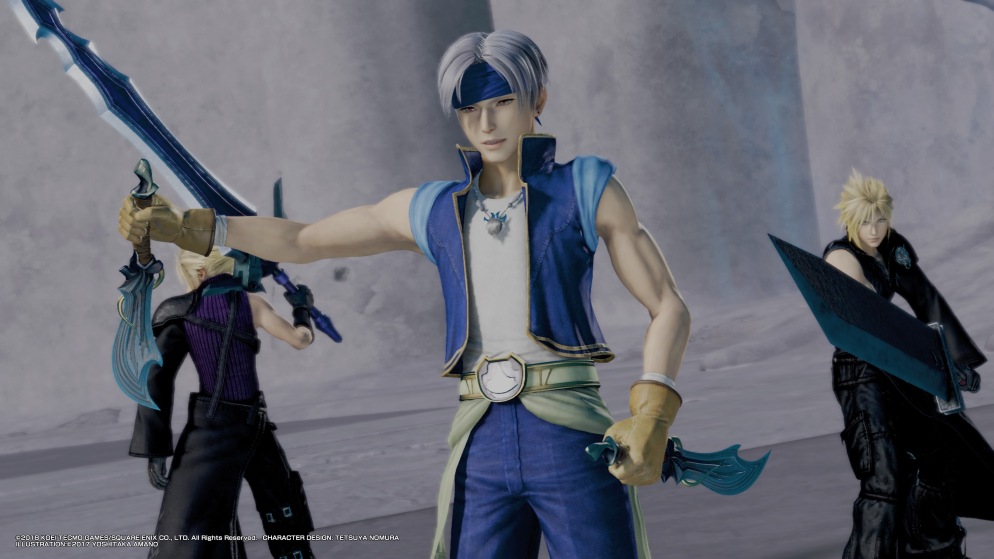 As mentioned this game has DLC, in form of both stages and characters, normally a month or so after they appear in the Arcade game as an update. So far we have had new characters from VI (Locke), VIII (Rinoa), and XII (Vayne), with more to come. What’s nice about this is that even if you haven’t brought the season pass or the characters individually, you still end up fighting them in the arcade mode and even the story mode.

Noctis and the Nameless Sky Pirate… now there’s a strange name for a novel.

Dissidia Final Fantasy NT is a fun game that will hold your attention for a few weeks, but if you’re not an online player, much like myself, you will soon run out of steam once you’ve gone through the story. The arcade mode wears thin after a while, and beyond that there isn’t much else to it. For £15 I was happy with my couple of weeks with the game, but if you paid full price on release I don’t blame you if you gave the game a harsh score. As for me? It was alright, but with many more fighting games on the horizon, I can’t see myself coming back to this one…