In terms of companions created for the comics, you don’t get more well known or infamous than Frobisher. The shape shifting “Whifferdill” who ends up enjoying the form of a penguin is certainly amongst the most unique companions! It’s almost a shame that I like to do these comics in batches of two (when they’re not too long, anyway), because as note-worthy as Frobisher’s debut story is, Voyager is a comic masterpiece, full of amazing imagery, beautifully written prose and some great scenes and characters. I may be covering this double bill as part of the Audio/Comic Companions Debut marathon, but Voyager deserves the most attention! Let’s have a looksie, then!

Synopsis (of The Shape Shifter):

Frobisher, detective extraordinaire, finds himself on his biggest case yet, pursuing the bounty on a man known as the Doctor…

The Doctor (Colin Baker) – The Doctor has left Peri at a botany symposium and gone on some solo trips, something he hasn’t done in a long time. That being said, he may not be alone for very long…

Frobisher – Frobisher is a Whifferdill, a shape shifter who works as a detective and/or a bounty hunter. He has had a rough life, and is looking for that one big score that might help him out of his current lifestyle.

Astrolabus – Astrolabus is an ancient Time Lord who once stole the Book of the Old Time from Rassilon himself. He is now growing ever older, ever madder, and ever more paranoid…

Voyager – A mysterious entity that wishes to have his star charts back, charts that are soon stolen by Astrolabus. He is now destined to glide around the universe on his galleon, seeking the Time Lord who stole it…

Josiah W. Dogbolter – Dogbolter is a frog-man who has risen to the top of big business, having now brought several planets, Venus among them. He has a grudge against The Doctor after he had a run in with his Fifth incarnation… 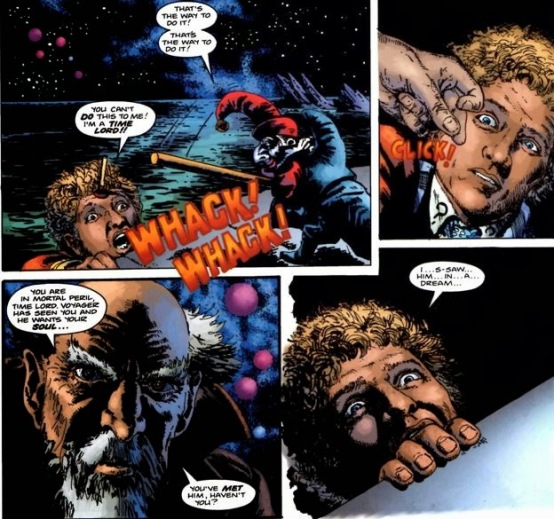 Crazy… like a FOX! … No wait, just crazy. Crazy and ominous.

Although I don’t really like The Shape Shifter as a story, I do love Frobisher, and this is a great way to debut the unique companion. A, well, shapeshifter is a character that’s easiest done in this medium compared to the budget restraints of TV and the visual nature of the gimmick not working for audio, so hats off to whoever pitched it. Now as of the next story he takes the form of a penguin and stays that way for most of his run, but they still managed to have fun with the concept in his first story. The idea to also make him a “gumshoe detective” style character was good too.

Voyager is just great in general though. Starts off with a bit of prose of The Doctor having a dream about a ghostly galleon that he can’t escape from and plunging to his death, then he and Frobisher manage to find a ship just like it frozen in ice. A mysterious man appears and steals some star charts from it and wonders off, leading to a chase. The mystery surrounding the crazy old man is great, as is his funny dialogue. Turns out he’s Astrolabus, an ancient Time Lord who stole famous artefacts and how now stolen from some still mysterious entity from possibly another universe only known as the Voyager. The Doctor gets into some hijinks at/in Astrolabus’s TARDIS (shaped like a lighthouse) until he gets away, leaving The Doctor to see the intimidating Voyager and his death ship appear and warn him that if he doesn’t get his charts back, they’ll be hell to pay.

I don’t think I’ve done the story justice by that description, its wonderfully drawn, beautifully written and generally as thought-provoking as it is entertaining. It’s truly a standout comic for DWM, and even though the follow up wasn’t anywhere near as good, it doesn’t take away from this story’s greatness.

Damn, I know the Sixth Doctor could be a bit more violent, but…

The Shape Shifter is good at introducing Frobisher, but fails as a story elsewhere. Frog-like crazy billionaire Dogbolter has put a price on The Doctor’s head, so Frobisher tracks him down and tries to take the TARDIS over, forcing the Doc to go to Venus and face his captor. The Doctor agrees as he was apparently going there anyway, and then the two trick Dogbolter’s men into giving them the bounty money, and then they fly off towards their next adventure… Huh? Why did the Doctor want to go to Venus then? I assume it wasn’t to make a quick buck… Dogbolter and the Doctor never interact or anything, it’s just a quick reveal that he’s the one behind the bounty and then it’s over just as quick. It’s really… weird. Still, it allows for Frobisher to develop, so hooray for that, but still… not great on its own merit as a story…

Frobisher’s more common form, for some reason. (A Penguin in general, not a penguin with comedy eye and nose accessories on…)

The Shape Shifter is the second DWM comic to feature Dogbolter, after his debut in the Fifth Doctor comic “The Moderator”. He would later reappear in several comics and even audio stories.

Astrobolus is said to have stolen the “Book of the Old Time”, which was mentioned in Fourth Doctor TV classic “The Deadly Assassin”. The whole plot with Astrobolus and the Voyager is finished two stories from this one, in “Once Upon a Time Lord”.

I definitely have to go with a split score here. The Shape Shifter is good in places, bad in others, and sometimes just confusing, where as Voyager is a flat-out masterpiece visually and in storytelling. While you could miss Shape Shifter (though it does have the all important debut of Frobisher) you should go out of your way to read Voyager.