Now here’s a conundrum, what constitutes a wrestling game? WrestleMania: The Arcade Game is actually a VS. beat em up in the vein of Mortal Kombat, complete with crazy moves, effects and digitally captured sprites. I went back and forth as to whether or not include this in the Wrestling Game Rundown but in the end it feels like part of my wrestling game history (due to how disappointed with it I was at the time…) so I’ll be including it and its sequel. With that said, how does WM:TAG stand up? I went into it this time with a fair idea of what it was, rather than the immature “hatred” like my past self, so…

Yep, “Round 3” as all matches are, apparently…

WrestleMania: The Arcade Game was first released in the arcades in 1995, with Megadrive, SNES and Playstation versions coming in the same year for both US and EU, as well as a US exclusive release on the doomed 32X. In 1996 it was ported to the Sega Saturn, probably delayed due to how infamously hard it was to develop for, and lastly, and rather pointlessly, it was ported to the PC in 1997, long after its roster was relevant!

Speaking of the roster it features Bret Hart, The Undertaker, Lex Luger, Shawn Michaels, Razor Ramon, Yokozuna, Bam Bam Bigelow, and Doink the Clown. None of these are making a game debut, which is good because it would be hard to call this “making their wrestling game debut” given… well, it’s not one! It’s also worth noting that the SNES port doesn’t have Yokozuna or Bam Bam Bigelow, nor does it have four people in the ring like other versions, so I’d avoid the SNES version if you want to track it down (I only owned it on the Mega Drive, so I’m alright…)

Wait, I’ve lost track, is this real or from the game?!

It plays much like Mortal Kombat, punches, kicks, crazy uppercuts and special moves done by pressing forward, forward strong punch, that sort of thing. A few moves are done by simply holding buttons down, so that’s a little different. Matches are two out of three falls, and when you’re out of health you just get pinned automatically, without any “1, 2, 3!” or anything. You can build up a “Combo” meter, where you can do, well, long combos.

As for modes, there isn’t much to talk about! It features “Intercontinental Championship” and “WWF Championship” modes, both are a series of matches that get harder and harder, with the latter being far more difficult (we’re talking 3-on-1 Handicap matches followed by a gauntlet of you facing the rest of the game’s roster with one health bar, starting with three against you at the same time…) It’s not great. The multiplayer side of things has a head to head mode where you face each other 1-on-1, and a Tag Team Championship mode, where you face the game’s roster in 2-on-2 matches. That’s it, so… Not a lot of variety. 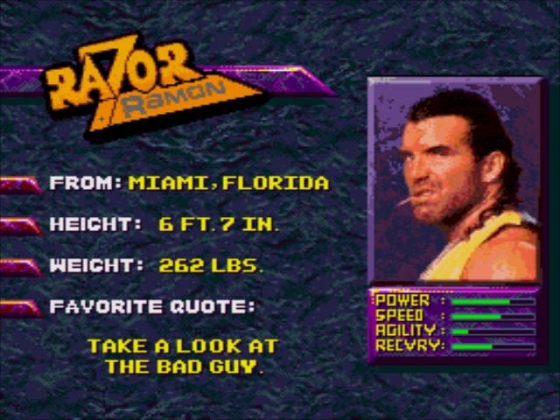 Somehow I feel the quote should have an exclamation mark or something, otherwise it reads like he’s just politely asking you to look at “the bad guy”.

The graphics, as we’re talking about the Mega Drive version here, are pixelated, and the movement is a bit stuttery compared to the original version. It’s not too bad, though, given the limitations. That being said, the more people appear on screen,  the worst the slowdown gets…

As for sound, music during the opening menu as well as entrance themes are fine, 16-bit-y and very much classic Mega Drive chiptune. There are quite a bit of voice samples from Vince, commentating on moves and such, which again sounds very low quality but impressive for the time.

Hey, it’s a triple threat match before they were a thing!

Back when I got it, filled with excitement based on a video I had that featured Bret Hart telling me how to play it, I was… extremely disappointed. I knew it wasn’t like the “proper” wrestling games I had (i.e. Royal Rumble and RAW) but it still looked cool… Sadly, I hated it. It was “stupid” because of all the unrealistic stuff, and it was just “trying to be Mortal Kombat” (which is true!) and so on and so forth. In other words, I didn’t give it a fair shake, not at all. It’s a shame, but I was young and still loved playing royal rumbles on RAW, so…

While I’ll forgive it for choosing a new genre this time, but I have to say it’s still not very fun. It’s fast paced and simple, but after a few matches it’s not very interesting and there are so few modes on offer… I’d rate it higher in order to be fair to it, but still not very highly…