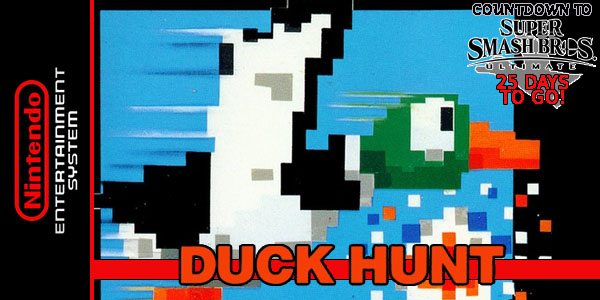 Funnily enough, out of the black box light gun games for the NES, I had (and still have, boxed on the shelf!) Wild Gunman and Hogan’s Alley, but never owned Duck Hunt. I did however play it around a friends a few times, so I was at least a bit familiar with it growing up. Still, on the topic of Smash Ultimate (as this marathon is!) I was more thrilled for the Wild Gunman and Hogan’s Alley references in Duck Hunt Duo’s moveset than the duo themselves when they were revealed for Smash 4. Anyway, it just wouldn’t make sense to review anything other than Duck Hunt for Duck Hunt Duo’s day in the countdown, so… let’s do it!

This is pretty much the entire game.

Duck Hunt was released on the NES in 1984 in Japan, the following year for the US, and 1987 for Europe. It required the NES Zapper, a light gun, which is always funny to think how early such a peripheral existed.

For players in the US it’s probably best known as part of a 2-in-1 cartridge, paired with Super Mario Bros. and sold with the console and the needed Zapper. It was also re-released on the Wii U Virtual Console, using the original Wii remote in place of the Zapper.

The part of the game nobody ever remembers.

This won’t take long… Either Ducks or Clay Pigeons appear on the screen, and you have to aim at them with the NES Zapper and, well, shoot them (or zap them, I guess?). That’s it! You have three modes which are basically “One Duck at a time”, “Two Ducks at a time”, and “Clay Pigeons”. You have to have shot a minimum number of targets before a round is over to advance to the next round, and that’s about all you need to know, apart from the sniggering dog who appears out of the grass (and is one half of the titular Duo in Smash!)

The graphics are nice and simple, brightly coloured and (not including the comparatively dull Clay Pigeons) are full of cartoony expressions.

The soundtrack is catchy, though obviously limited to one or two tracks, and the sound-effects are… alright. For an early NES game they’ve got that “not quite Atari-simple, but not yet very complex” thing about them.

The dog walking and sniffing, before the round starts… (there isn’t much variety in screenshots, I’m afraid…)

Me and Jack (my friend) taking turns on Duck Hunt one time was fun, but… I mean, it wasn’t shooting cowboys or Chicago gangsters, was it? (Seriously though, I don’t think I played it enough to give it a proper “then” score, really…) 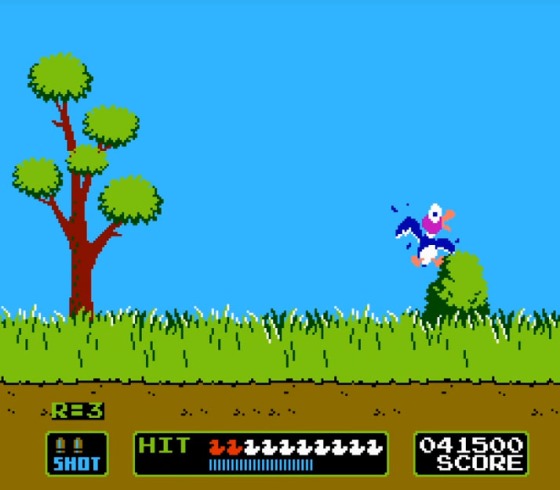 *BLAM!* Take that, you bastard!

Now? Well, I’m not sure. I had to play a ROM and use a mouse because even if I tracked a NES cart down I don’t have a CRT TV or a working NES Zapper any more. Still, it’s not a stretch to say it’s still simple fun for a short burst, but gets repetitive quickly, even if I was actually shooting a pretend gun at a screen…