It seems as we get closer and closer to the end of this marathon, we’re hitting key Nintendo franchises I never ended up playing at the time of their release. In the case of Yoshi’s Island it was due to it being released around the same time as the PS1, which had caught my eye early thanks to being featured on Bad Influence (UK Gaming show…) combined with the fact that I had a Mega Drive, my brother had a SNES and he just never brought it (probably for the same reason) Still, I did regret not getting to play it at the time because it’s simply really good, if not great! Let’s take a look…

Super Mario World 2: Yoshi’s Island was released in Japan in August 1995, with a USA and European release the following October. It has been re-released multiple times on various digital platforms, as well as an enhanced remake on the Gameboy Advance.

Yoshi’s Island is responsible for giving most of Yoshi’s trademarks, like the flutter jump and turning eaten enemies into eggs. It’s generally considered one of the best games of all time… 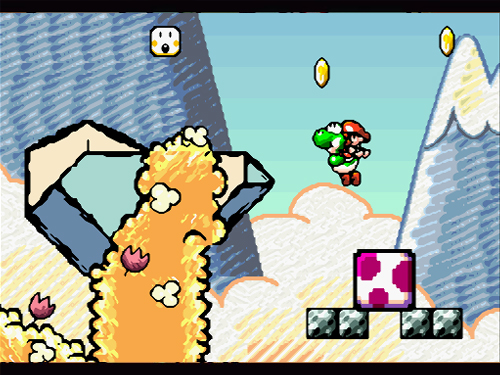 You control Yoshi, who has Baby Mario on his back. In order to reunite him with his brother Luigi (who has been taken my Magikoopa) you have to get through a tonne of platforming levels! Alongside all the jumping and, well, platforming that entails, you can also eat your foes and spit them out as an enemy-damaging projectile, and save them up as “ammo” by converting them into eggs, which follow you around. The game doesn’t have a health system, instead when you get hit Baby Mario starts floating away in a bubble and if you don’t reach him and get him back before the timer runs out, you’re done. Apart from pits and spikes, they still kill ya!

You can pick up and swallow various power ups, like fire-based enemies making Yoshi breathe fire for a while, and the classic temporary invincibility, but you can also collect “Morph Bubble”  that changes Yoshi into a helicopter, car, submarine… it’s very odd, but leads to more variety in levels, so why not?

There are plenty of bosses to fight, coins to collect (both to gain an extra life and Red Coins to get bonuses) and generally lots to do alongside the tight and well-crafted platforming.

That block is thrilled that Yoshi turned into a helicopter!

The graphics of Yoshi’s Island is great, not only are the sprites nice and detailed, but the levels and backgrounds all have a hand-drawn, coloured-in aesthetic that’s not only really charming, but really well thought out.

Soundtrack and sound effects are both high-scorers as well, especially the calming, fun music. 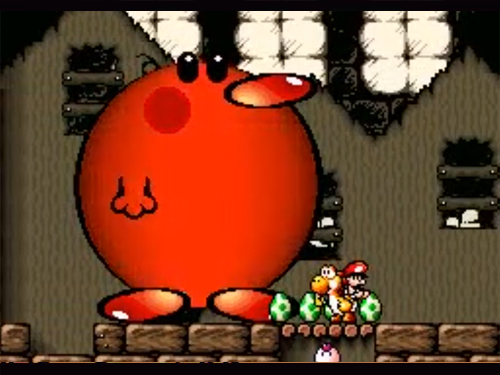 Truly the most terrifying creature of all time.

As I already stated, Magikoopa kidnaps the Baby Luigi but drops Baby Mario onto the back of a Yoshi. This leads to a relay race as Yoshis travel across the titular island to reunite the brothers and defeat Magikoopa… which they do!

Yoshi’s Island is a delight. Not only are the controls perfectly crafted (being able to both platform and aim and fire eggs at the same time should be really tricky, but it doesn’t take long before you can do it effortlessly), the art design in still even now fairly unique and lovely to look at, and the sound design to top notch. There’s not doubt in my mind that even in 2018 Yoshi’s Island is still a top game.