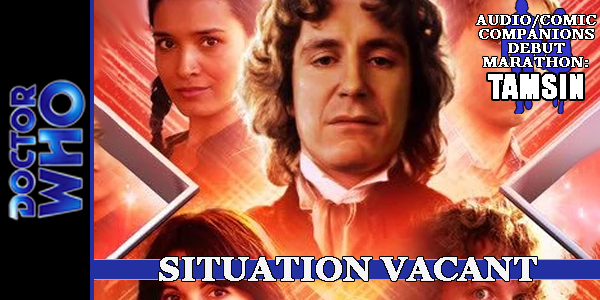 When I announced this Audio/Comic companion marathon I actually excluded Tamsin Drew because in reality she’s just a cog in the larger Lucie Miller storyline and only lasts two or three stories as an actual Doctor companion, but you know what? The Eighth Doctor names her in his death monologue, so why not? Save someone complaining I “left her out” anyway! With that all said, let’s take a look at Situation Vacant, a really fun hour of Doctor Who!

TRAVELLER IN TIME AND SPACE seeks male or female companion with good sense of humour for adventures in the Fourth and Fifth Dimensions.

The Doctor (Paul McGann) – The Doctor has left Lucie Miller to backpack across Europe while she deals with her grief, so when a mysterious advert in a newspaper, apparently from him, advertises for a new companion, he’s intreaged enough to attend his apparent meeting and see the new candidates…

Tamsin Drew (Niky Wardley) – Tamsin is a failed actress who wishes to travel in time and space, but has no self-confidence. In order to “land the role” she invents the persona of “Juliet Walsh”, a no-nonsense business woman…

Hugh Bainbridge (James Bachman) – Hugh is a bit of a helpless, posh idiot, but his heart seems to be in the right place…

Theo Lawson (Joe Thomas) – The shut-in nerdy computer type of guy, Theo only sees potential profit and prison avoidance in the advertisement to travel in time and space, though that doesn’t mean he doesn’t have his plus points!

Wanda Rothman (Sabina Franklyn) – Wanda and her team discovered a material called Vodium, a material that when activated creates miniature worm holes that suck people into oblivion… Maybe she should have done a few more tests before the big conference?

Leonard Pallister (Tony Milan) – Dr. Pallister was a shoe-in for the Chesterton Award, but lost, even though he had seemingly created entirely sentient software…

The thing that Situation Vacant gets right from the get go is the mood. Throughout the whole story there is a light-hearted, almost Douglas Adams-esque tongue-in-cheek to all the sci-fi and “drama”, and the main cast pulls it off really well. The Doctor suddenly finds himself leading an audition for his next companion at a large conference building and decides to just run with it, and his potential candidates are all a bit… eccentric. Hugh is a bumbling public school toff, “Juliet” is a hard-nosed business woman, Asha is actually quite normal if it weren’t for her ability to grasp the unknown so quickly, and Theo is your classic hacker “nerd” stereotype… except that’s not the whole truth.

No, actually Hugh is a Vampire named Drusis who wishes to travel with The Doctor so he can devour various time related things, but he has to be invited onto the TARDIS because of that old vampire line of not being able to cross a threshold without invitation. Juliet is actually out of work actress Tamsin Drew who assumed a hardnosed businesswoman type would impress more, Asha is Lantis, an alien who has been stranded on Earth since 1995, unable to use her call device, and Theo is not just a hacker but a criminal who hacked his way into banks to make himself rich, and now wants to leave the area before the authorities catch him.

During the course of finding this out are two connected events at the conference: several small wormholes opening up around the place thanks to people misusing “Vodium”, and a scientist who has created sentient AI and several large and small robots… who sadly gets sucked into a wormhole and killed, leaving his AI to go on a robot rampage. These incidents led to the Doctor being able to assess each candidate, but it also lead to “Juliet” failing to save a woman, Asha to kill several people with alien weaponry, and for Theo to take control of the robots and decide to try to take over Earth with them. Hugh heroically saves the day and “wins” the audition, but actually it was only so The Doctor could trick him and put a stop to him, the Time Lord having been able to sniff a Vampire out long before the reveal.

After the level-headed desk worker Rachel turns The Doctor down, he ends up accepting a desperate but finally honest with herself Tamsin Drew as his companion. It’s quite the wild ride, but a really fun hour of silly sci-fi.

Nothing really stands out, it’s an absolute blast, especially the first time round when you don’t know the twists (so if you’ve read this before listening to it, for shame! … but thanks for the view.)

Towards the end The Doctor figures out that the person who put the advertisement in the paper actually went through all his/her applicants and sent The Doctor all the bad ones. Who this person is and who he chose as a companion is revealed in the audio story “The Book of Kells”, just two releases from this one.

A large robot causing havoc across London brings a lot of comparisons to the Fourth Doctor’s debut story “Robot”, though that’s at least cheekily referenced by the Eighth Doctor in this story.

Situation Vacant is a really fun hour of Doctor Who, with lots of new characters, but characters you come to know and like (or like to hate) despite the short runtime. The duo of The Doctor and Tamsin only lasts two full stories, but it does get off to a good start! It loses a bit of polish the second time round, but it’s still a solid listen. The score, however, will reflect the first-time listen…