Have you been wondering why I haven’t been posting game reviews, specifically modern game reviews, recently? Well, I thought I’d finally give the Super Robot Wars series a proper go and imported the English language Asia version of the first PS4 game, V (as in the letter, not the roman numeral for five…) The little “that would be fun” idea ended up absorbing nearly three months of my gaming time… Don’t get me wrong, I enjoyed every second of it, and have already made plans to import the next in the series when the gaming world goes quiet again, but yeah… this was a marathon rather than a sprint, that’s for sure! Let’s take a look…

I THINK it might be a tad too late, there….
(Note this is one of only two screenshots that were mine, as the game stops you from taking them after the first few missions, despite also placing a big logo in the corner!)

Super Robot Wars V was released in Japan and Asia on February 23rd 2017, celebrating 25 years of the franchise. It is the eighth standalone title in the series, but there are so many spin-offs that it’s far from the eighth overall game…

The Super Robot Wars series is mostly (or entirely, probably) made up of isometric, grid-based tactical RPGs, and this is no different. Place your units down, you can only move them so many squares per turn based on the stats of both the pilot and the machine they control, and their attack range is also based on stats. When two units get into a battle a different set of stats are used to calculate the damage you deal, or if the enemy defence or speed is high enough, whether it does any damage at all. Your foe can then counterattack, unless they chose specifically to defend or dodge.

Your health and energy are displayed when you battle, with the latter regulating how often you can use your big attacks (with the exception of some attacks which use ammo rather than energy). Some attacks are Map Attacks which can hit multiple enemies at one time, whereas others can cause status changing effects. During intermissions between chapters you can upgrade your units’ stats with money earned during the battle, as well as buy traits with a separate collectible (TAC points) for your pilots or their machines which will give them new Spirit Commands (more on those in a bit) or just generally raise their stats further. You can also raise your pilots stats by making them Ace Pilots, done by shooting down a total number of 60 kills with them over the course of the game, with Great Ace coming 20 kills after that.

I have to hand it to them, some of the original robots/mobile suits and characters were really good.

Then we get to the special abilities. There are two sets, just to make things more confusing for a newbie like myself. You have “Spirit Commands”, which can be used just before battle (either if you’re attacking or defending) and can have effects like increase the dodging likelihood to 100% for one battle, or raising your attack, that sort of thing, and its governed by a stat that increases as the battle goes on. The other type is Extra Orders, which have similar effects but can be issued on the map before any battles begin, and can only be accessed by pilots who have shot down a certain number of enemies on the map. For the big command ships, or battleships, you also have Extra Actions, which are similar but instead of upping stat of one unit, it can up the stats of everyone around it, or raise a stat of an ally unit all the way on the other side of the map. You also weaken an enemy by having several units surround it on the map, something I didn’t know until about half way through the epic, but it came in handy during the final few levels, that’s for sure…

So there are a lot of menus, a lot of stats on the screen, but to be honest it’s not that hard, in fact given this is my first proper go at an SRW game (I had previously played about a quarter of a fan-translated PS1 title…) I kept the game on the default normal difficulty and only got one game over (and that was due to underestimating how long it would take to get a specific unit to a specific square on the map, which was the mission of the level…) In fact if you tallied up all my units that were shot down across the whole game it wouldn’t reach double digits. That’s not me showing off, it just shows how easily accessible the game is once you get the hang on what each menu/stat generally does and when the best time is to use them. 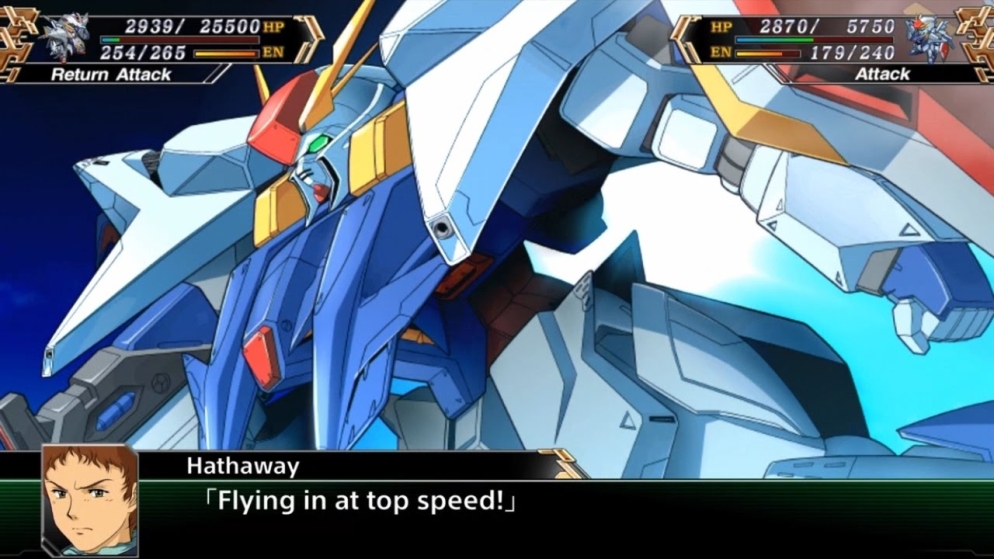 Hathaway in the Xi Gundam was my top pilot in the end, his Funnel Missiles were extremely handy. Looking forward to the Hathaway’s Flash movies even more now!

The main core of the game involves some really nice sprite work, with fluid animation for the attacks that sometimes include little animations of the pilots reacting as well. The battle map uses chunkier sprites but they’re still appealing, and the menus and dialogue boxes are all nice, clean and appealing, with some crisp artwork of all the pilots, which is handy because there are A LOT of scenes of characters talking back and forth with only the artwork and menu for company.

Soundwise the game is good, music from each show accompanies the units as they attack, and original music is good too. The soundeffects are all on-point (from cheesy 60s/70s laser sounds, right up to modern machine gun effects) and while 95% of the game is just text, there are a few times we hear actual dialogue from the voice actors, though mostly when they do an attack or defend… 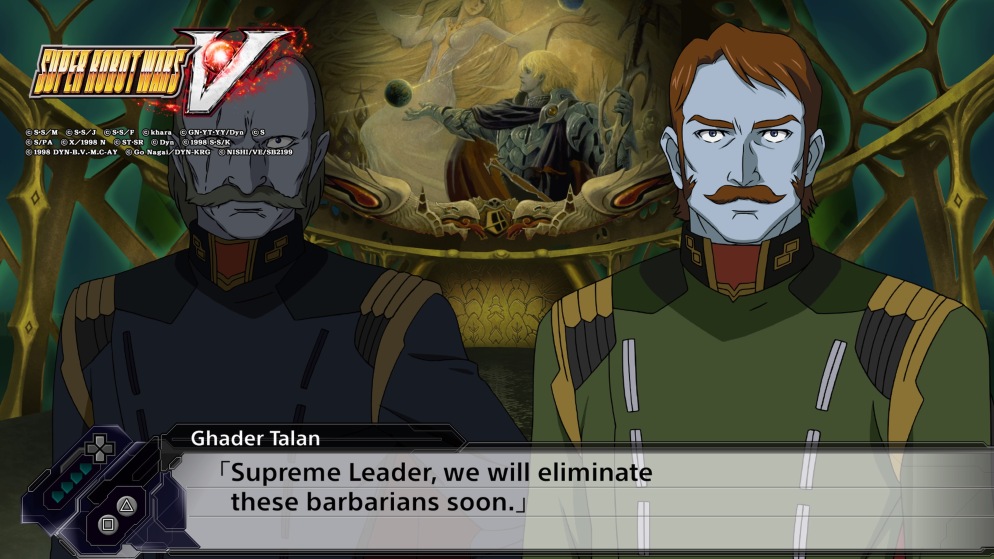 Apparently the Gamilan Empire is all about the mustaches!

The story is LONG and full of a lot of dialogue, but the short version is the key story from Space Battleship Yamato 2199, where the titular ship travels from their ruined Earth to the distant planet Iscandar in order to restore it, but face the evil blue-skinned Gamilas people along the way. The key difference here of course is two other universes begin to converge and combine, with storylines from Cross Ange, Full Metal Panic!, Mazinger, Getta Robo, Nadisco, Evangelion, Might Gaine, Gundam 00 The Movie and Unicorn Gundam all play out, with little additions here and there to include the greater cast, like rival pilots and other foes, allowing some cutscenes and brief moments from those to appear to break things up and give them a little more purpose (with the exception of Gundam SEED Destiny, which has no enemies or storylines from it appear at all, beyond Shinn being a bit grumpy with his fellow pilots)

Also a key storyline focuses on the made-for-the-game protagonist, either Soji Murakumo or Chitose Kisaragi, depending on who you chose. Given it also involves a sentient AI girl as a companion, I felt my choice of Soji, the male, was more logical, and the relationship between the two was quite touching in the end.

Now I had no knowledge of a lot of these series, not really being a “Super Robot” kind of guy, so it was quite fresh and fun to follow, but it is a long and twisty one, so… strap in! (in other words I won’t be spending many, many paragraphs giving an actual rundown of the entire plot…) 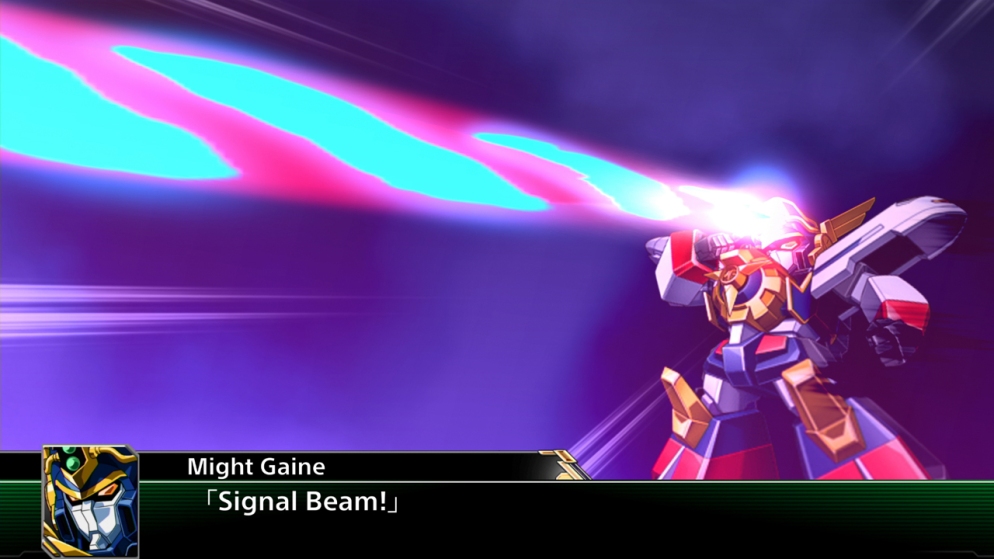 Might Gaine is a sentient train that transforms into a giant robot to fight evil. Just for the record.

There are several packs of optional missions (or scenarios) that take place in between the ones in the base game. They give extra equipment and generally mean you can level up faster due to gaining more experience and money. Nothing major.

I loved using Banjo and Daitarn 3, mostly because of the super-cheesy music that plays when he attacks…

Well, even though it was a tactical JRPG and I have a fulltime job, I didn’t think it would be this much of a marathon, but I can’t say I didn’t enjoy every bit of it. Getting to enjoy certain characters and making them Ace Pilots, enjoying the bizarre mixed up story,  the music… it certainly made a fan out of me and it comes highly recommended to those who like at least a few of the series featured (and who have plenty of spare time!) Now to plan when I have nothing else to do for three months so I can play Super Robot Wars X…