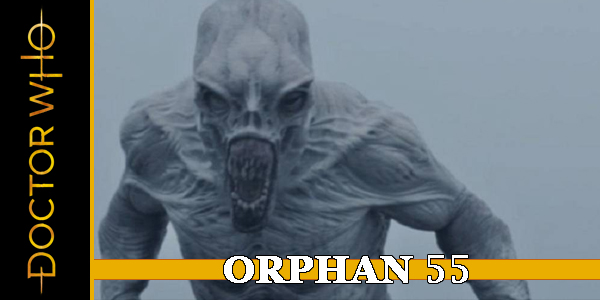 A little bit late with this review, but still (just) before the next-to-air episode, it’s time to put down in words my thoughts on Orphan 55. I’ll be honest, I was really enjoying it for most of its runtime, it was a good base under siege story with some properly creepy monsters, sadly there was a twist that not only didn’t really work in Who’s history, but didn’t work at all due to its lack of subtly. Want to know what I’m going on about? Read on!

After Graham O’Brien wins Team TARDIS a free holiday at the high-end alien resort Tranquility Spa, it becomes clear that not everything is as it seems — why is the staff so worried about oxygen levels in the Spa when the planet appears to be hospitable to humans? What are the monsters stalking the corridors? And why does the planet on which they’re all standing bear the ominous name of “Orphan 55”? 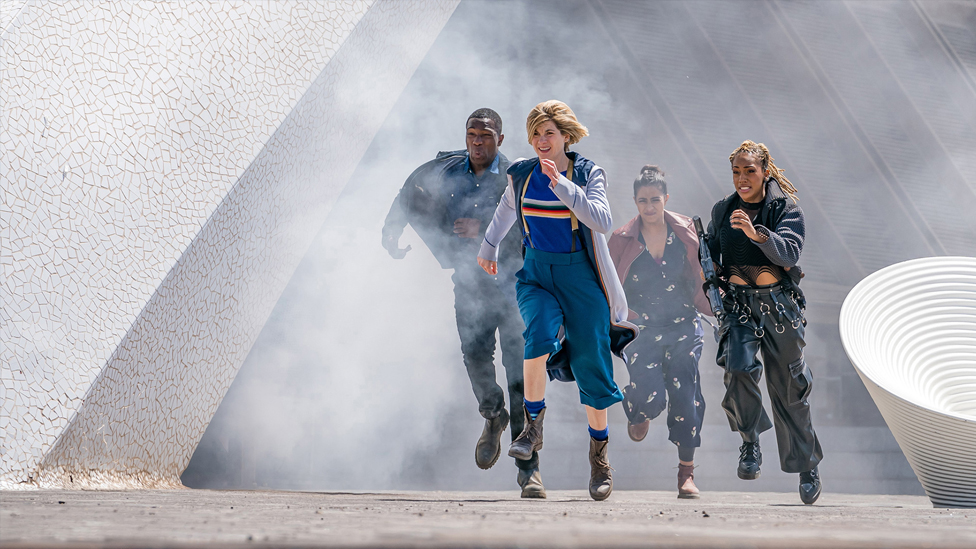 As I mentioned in the opener this is, on the whole, a good, fun base under siege story. The Doctor and companions arrive in a futuristic resort, which is soon under attack from monsters outside of the facility breaking in. The Dregs look great, somewhere in between Xenomorphs and something less pointy-headed, and Laura Fraser as Kane, your typical “hard nosed and all for the money” soldier, really added to it. Speaking of Xenomorphs, there is a very Aliens-like ground vehicle they drive around on the surface during the episode that was a good little further homage.

Gia Ré as Bella, a kind 20-something who gets close to Ryan, only to end up being the terrorist responsible for letting the Dregs into the facility, was good in her role. I mean, the role itself was rather stupid, (her reason for doing all this was because her mother, Kane, had left her at a young age to help set up this resort) but she did her best with the script she was given! Father and son mechanics Nevi and Sylas were also harmless characters, not original but entertaining.

Once again The Doctor and her three companions were much better here than they were for most of the previous season, and doubly once again for Jodie Whittaker, who is finally showing a bit more range with her Doctor. Overall they’ve built Ryan, Yas and Graham up well enough that I’ll be emotionally invested when they leave. 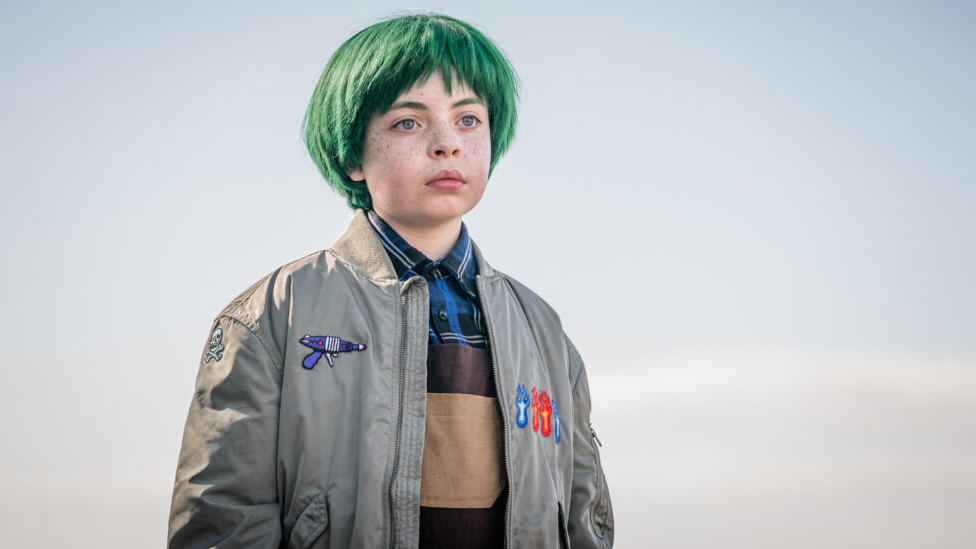 Okay, so I’ve sure you’ve heard this by now (given its been six days since it aired…) but I have to fall on the side that really disliked the heavy-handed message about ignoring climate change. Now, I’m no denier, the fact that half of Australia was literally on fire and yet people still don’t think its real baffles me, but this was entirely the wrong way to do this message. The planet, Orphan 55, ends up SOMEHOW being a future Earth that was ravaged by climate change / nuclear war and abandoned. I say somehow because The Doctor is as surprised as anyone, probably due to the fact that Earth’s history has already been laid out on the show, complete with mass exoduses due to solar flares and the like. They try and cover it by having The Doctor say it was “one of many possible futures”, but since when has the show worked like that?

Anyway, fan-wanky confusion aside, the idea isn’t bad (if it was just an Earth colony that suffered something similar it would have been fine) but it was the approach. The Doctor tells her companions that “scientists have been ignored for years” leading to Yas putting two and two together and saying it was “climate change”, that was in-you-face enough, but the end of the episode The Doctor pretty much speaks to camera and tells the audience that it’s not too late to change. RIGHT TO THE CAMERA. I don’t need a lecture, and I didn’t want to be taken out of what was a fun episode, but instead my choir got preached at and it just made me annoyed that the writer hadn’t heard to subtly. I hope he wasn’t shocked that it got a bad backlash, mostly from non-believers who aren’t going to change their ways due to a Whittaker monologue. Make it subtle, in the background, not in your face. Pertwee classic The Green Death was more subtle than this, and that wasn’t subtle!

Well, anyway, apart from that fourth-wall-breaking lecture, the only other major complaint was a few extras. Vilma, an older lady who was searching for her lost husband Bennie (who was nabbed early in the episode) was annoying, shouting her husband’s name when they were trying to sneak past killer horror creatures, and while Hyph3n, a tour guide who was also partly a squirrel-like creature, was fine personality-wise, effects-wise never looked like anything other than someone in a costume. 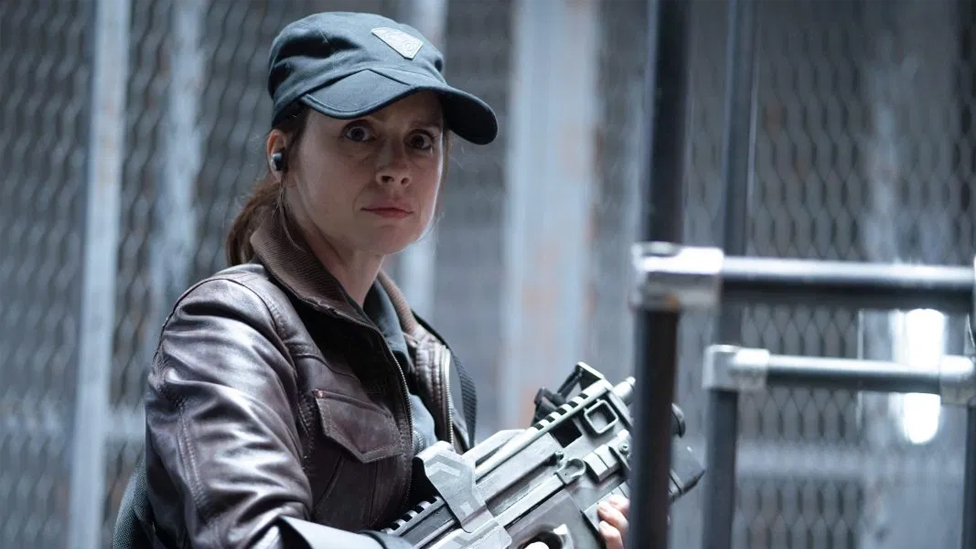 Funnily enough, the Sixth Doctor had once been on an Earth that has been displaced and altered beyond recognition (and even found out via a sign in an old subway, the same way the Thirteenth Doctor finds out here!) in the Trial of the Time Lord’s first story chunk, “The Mysterious Planet”.

Speaking of Trial of a Time Lord, a relaxation resort under siege by killer creatures was the plot of Part 3, “Terror of the Vervoids”, although that was a luxury space liner rather than a resort. A luxury planet-based resort of the future with a sinister secret was also done in the Sixth Doctor (again!) Lost Story-turned-audio “Paradise 5”.

The Haemovores from Seventh Doctor TV classic “The Curse of Fenric” were mutated future humans who were changed due to a polluted Earth, though this was stated to be an alternate timeline, rather than a “possible future”. 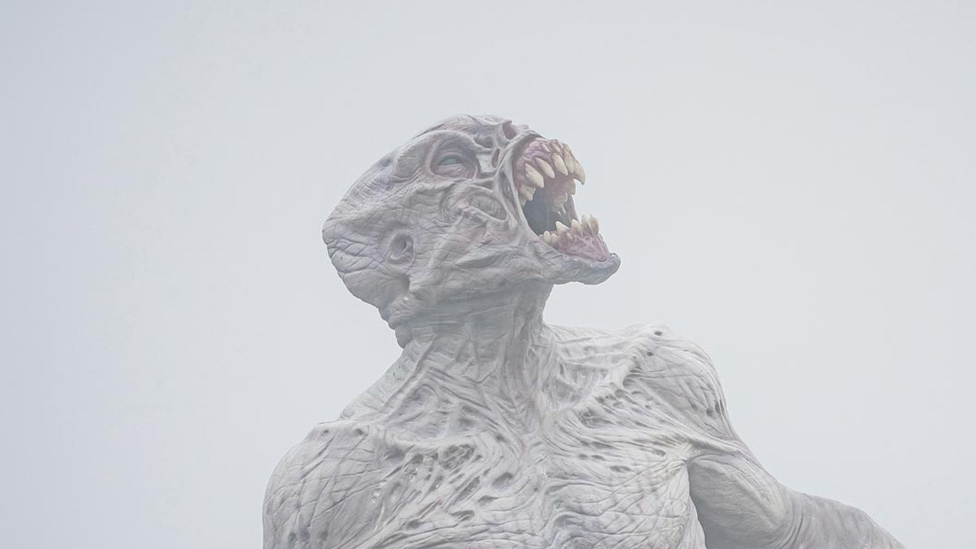 One more look at a Dreg, a proper great creation of practical effects!

Orphan 55 was a really fun base under siege story with a well designed and realised threat at the centre, but some heavy-handed political messaging, no matter how much I agree with the message, really brought the episode down as it just completely took you out of the moment, twice. With a few other subtle negatives, it’s lucky to get a 3, but there was a lot of good in it really… The writer just needed to learn subtly (much like I need to be bothered to look up the writers name… ah well.)