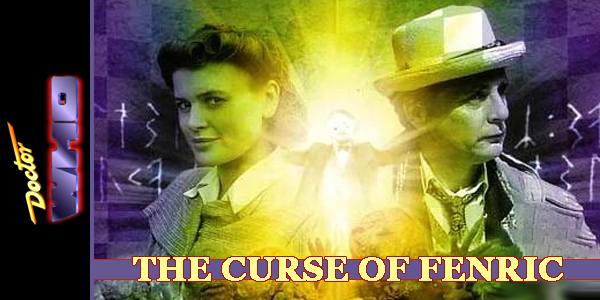 So this past Sunday’s new Doctor Who was the first half of a two-parter, so … here’s a new Doctor Who review anyway! Yes, Season 26 was released on Blu-Ray a few weeks ago and so it’s time to review a story from the set, in this case: The Curse of Fenric. Set during WWII, with priests, soviet soldiers, weird vampires and Lovecraftian all-powerful ancient beings (and tentacled ones, too!) it’s quite the story. Somehow though, it all comes together in the end! Let’s take a look!

The TARDIS materialises at a secret naval base off the coast of Northumberland during the Second World War. Dr Judson, a scientist there, has created the Ultima Machine, an early computer designed to break German codes. But Judson also has a much more sinister use for the machine. He plans to translate the ancient runes in a crypt of the nearby St. Jude’s Church, with no idea of the effects…

Although I do like the next story, Survival, this really felt like it should have been the series finale (and indeed, overall finale until at least six years later…) as it ties up some parts of Ace’s TV run and gives her some proper character development. You see at the heart of this story is Fenric, a powerful entity that The Doctor had sealed away long ago in an unseen adventure (one that still hasn’t been depicted in any medium, beyond a few paragraphs in the novelisation, apparently) eventually returns and reveals that he used his power to create the time storm that brought Ace into the Doctor’s life, as well as being responsible for the mysteriously time-travelling Lady Peinforte from Silver Nemesis. It’s a good bit of fun, and only gets better as in order to weaken Fenric, The Doctor needs to weaken Ace’s faith in him and so pretends she means nothing to him and that he doesn’t care if she dies. This breaks Ace in an unpleasant manor, the first of many Ace being manipulated by The Doctor stories, if you count expanded media!

Also present during this moment is a being known as “The Ancient One”, who is actually from the far future (I know, I know…) and Earth’s future for that matter. Yes he is the last of his kind: humans, as the human race was transformed into horrible creatures by pollution, which would make this very similar to a rather poor recently aired story, if not for the fact that the air and sea polluting incident that starts it is stopped during the Ancient One’s battle with Fenric, thus this doomed future Earth is wiped from the timeline. It’s somewhat of an anti-climax that the all-powerful Fenric is defeated by being dragged into a sealed room and melted by killer gas, but hey-ho. He returns in the audios anyway…

To be honest, the best part about the story is how well it builds everything up. The Doctor and Ace arrive at a military base during WWII (believe it or not, this is the first WWII TV story… the first of MANY) and meet a Priest, Rev Wainwright (Nicholas Parsons), who has lost his faith thanks to the war, some surprisingly friendly Soviet soldiers (specifically  “Captain Sorin”, played by Tomek Bork), a pair of nice if not mischievous evacuee teenage girls called Jean and Phyllis (Joann Kenny and Joanne Bell, respectively), Commander  Millington (Alfred Lynch), who sits in a recreation of Hitler’s war room in order to “become the enemy and then know your enemy”, and finally a codebreaker and scientist called Dr. Judson (Dinsdale Landen) who is constantly degraded by his attendant for being stuck in a wheelchair, and who is more obsessed with ancient Viking lettering in the Church basement than he is cracking the enemy code.

All these stories slowly connect, slowly make your interested in the cast, and then enjoy the drama of seeing who survives the wave of “Haemovores”, basically vampires but based on long-dead Vikings covered in barnacles and the like. The Priests attempted redemption before being killed anyway is unexpected and interesting, Captain Sorin’s love story with Ace and scenes of him using his faith in Soviet Russia to scare away the Haemovores are great… before he too is killed when Fenric takes over his body, and Millington’s slow descent into madness … before death, is all really good. Judson being taken over by Fenric is good too, seeing him walk around and the like. I loved a moment when Fenric killed Judson’s former attendant, one who always treated him like a child rather than a man who just happens not to be able to walk, and Fenric says something along the lines of “the person whose body this belonged too would have enjoyed me doing that”.

Then there is one more, quite important substory, and that being Ace hating her mother, but then she finds out a little baby she’s been helping look after and eventually escape from the monsters turns out to be the baby version of her mother. She freaks out, unable to be angry at the baby, but still wanting to be angry at her mother as she knew her back in her old life. It might be one plot line too many, but it still shows some character development for Ace in a story where she already gets her faith in The Doctor shaken. Ace gets more layers in this one story than pretty much all companions before this combined. A sign of the times, and one continued in the revived series 15 or so years later. This is also another fine story for the darker, mysterious and manipulative Seventh Doctor that expanded media has delighted in teasing (or flat out gone crazy with…)

Damn, a little overkill for two clearly unarmed civilians, even if it is a top secret base!

The only real bad is Jean and Phyllis. They’re fine as the naughty girls ignoring the advice of their carer, only to end up paying for it, but when they become Haemovores they just lose all acting ability and become pantomime villains… pantomime villains who can’t read their lines very well. It does zap the tension out of a few scenes, but thankfully it doesn’t hurt it much.

As mentioned, Fenric and the Haemovores reappear in the Seventh Doctor audio epic “Gods and Monsters”, as well as a Twelfth Doctor comic called “The Wolves of Winter”.

Also as mentioned, the events of TV stories “Dragonfire” and “Silver Nemesis” end up being tied into Fenric’s appearance here. Ace also mentions a spooky house back where she used to live, which was actually supposed to be foreshadowing the events of “Ghost Light”, but due to schedule changes, it actually happened before this story (thankfully it can be taken as Ace talking about a recent event as well!)

You know you’re a well-trained soldier when you can keep calm during this situation!

The Curse of Fenric is a proper classic. There are only a few Seventh Doctor TV stories I consider great, and this is may be the best of the bunch. Lots of little stories slowly coming together as everything falls apart, Ace gets some character development, The Doctor is interesting and powerful in his own quiet way, and even the practical effects are good. If, for some reason, you only want to watch one TV Seventh Doctor story, this is a good one to pick!