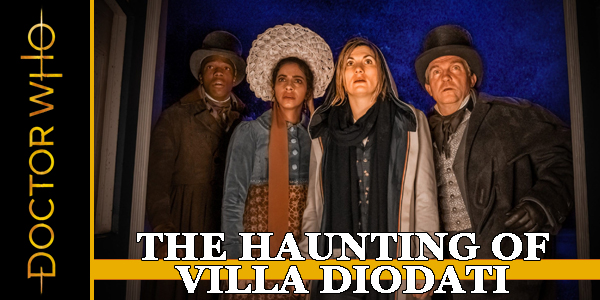 So, the Haunting of Villa Diodati does take place at the same time as a classic Big Finish story and makes it… unable to fit, while at the same time taking ideas from nearby stories as well. No doubt, not denying it. It’s also a really good story, so enjoyable that I don’t mind at all that history has been altered, as it tends to do a lot. So why is the story good? Well, it’s funny you should ask, because I was just about to write a review of it!

The Doctor and her companions visit Mary Shelley on the fateful night in 1816 when she creates Frankenstein but all is not as it seems. The rooms of Villa Diodati keep shifting around and ghosts are stalking the halls. And the group soon remember a familiar warning: “Beware the Lone Cyberman. Do not let it have what it wants”. But why is Percy Shelley not where he should be according to history? 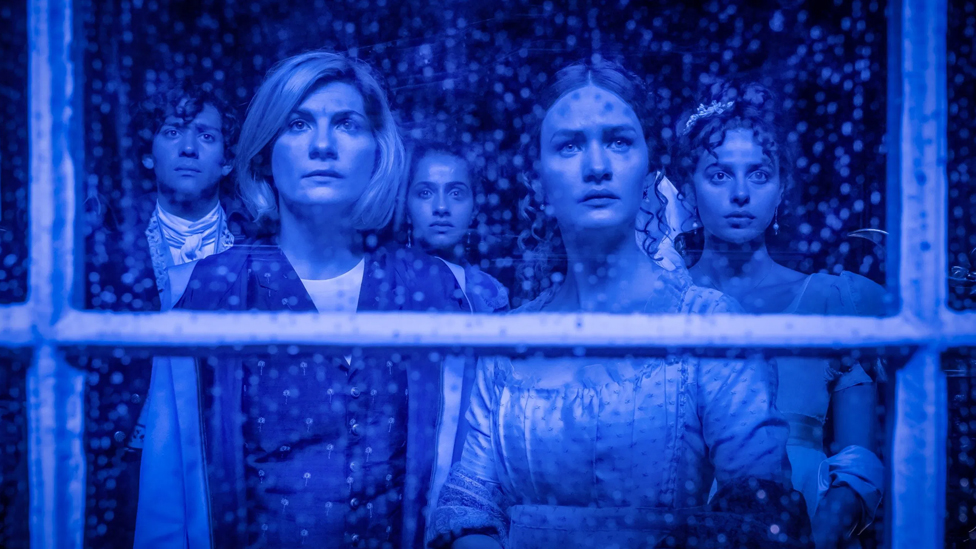 A night where not only did Mary Shelley write Frankenstein (well, it was apparently across three nights, but let’s ignore that…) but one she did while in the company of Lord Byron, her future husband Percy Shelley, Claire Clairmont (Mary’s stepsister who slept with both Percy and Byron) and Dr. John Polidori, who would be one of the first people to write about Vampires, it’s hard to see why it wasn’t done in the TV series until now. It’s weird Big Finish got there first, to be honest!

So The Doctor, Yas, Ryan and Graham arrive and get caught up in the atmospheric ghostly shenanigans, including skeleton hands walking around by themselves, while Mary acts headstrong and Byron acts like the smug git he apparently was. It’s all good fun. Polidori apparently sleepwalks and ends up sleepwalking through walls, which tips The Doctor off that the house isn’t what it seems (I mean, I though the living bones would do it, but whatever) Soon everyone is leaving one room and ending up back in the same room, that sort of weird funhouse stuff, but eventually everyone sees out the window a figure being struck by lightning as it tries to appear, and soon is succeeds in appearing… in the house!

It’s a partially converted, rusty Cyberman, and he’s looking for something called “Cyberium” that will save his race from being wiped out in the Cyber Wars. Yas and co. remember Captain Jack’s last words of “Don’t give the Lone Cyberman what it wants” and reminds The Doctor of that fact, to which she is more than familiar. This leads to a bit of a run around until they meet Percy Shelley, hiding in the cellar, the Cyberium apparently having attached itself to his mind and is the reason the house has been acting all strange, it was the Cyberium’s defences. The Doctor manages to extract the Cyberium into herself (by showing Percy his future death, which was a bit grim!) and everything was good… until the recharged Cyberman arrives and threatens the whole of history by pointing a gun at Mary Shelley before she wrote Frankenstein.

The Doctor explains to Ryan, who talks about millions of lives in the future being on the line, that Mary dying now could wipe out him and everyone he knows due to the flexible nature of time, and how she refuses to let any more of her friends die at the hands of Cybermen, which to be fair, is at least two in Adric and Bill (well, sort of), an impressive track record really! You have to look into expanded media like Audios to find the Daleks offing a companion… Anyway, she gives the Lone Cyberman what he wants, as was always likely to end up being the case, and he buggers off back to the Cyber Wars. The Doctor and co. say their goodbyes and head there themselves…

It was a really fun story from top to bottom, full of great imagery, atmosphere and an interesting plot leading into the two-part finale. Even the Cyberman was actually an effective and creepy enemy for the first time in God knows how long. A scene where he snaps the neck of a maid and takes Mary’s baby and holds it up high was really effective, even if the baby being left on the floor was the obvious, and frankly right, reveal (no need to go too far with the evilness!) Let’s hope the end lives up to it and the other standout episodes so far this series… 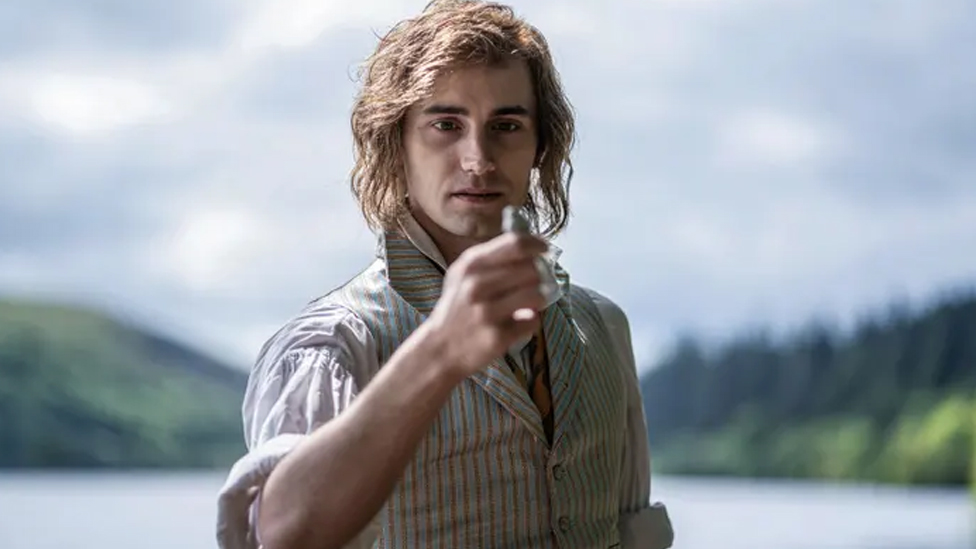 Not much! I mean, it is a shame that Mary’s Story, and therefore the three audio adventures she has afterwards, have now been erased, but as with everything, they still happened to The Doctor, just because they aren’t the current version of events doesn’t mean they didn’t happen, just that they’re not around to visit any more. The same way stories from the 60s era of the show that are set in the future have large monitors and wardrobe-sized tape computers, they still happened to the Doctor and his companions, it’s just the future has been altered somehow to mean we don’t end up with a weather-controlling moonbase ran on 60s technology in 2070… OR DO WE?!

That being said, I was surprised to see not only the setting and some of the imagery from Mary’s Story being used, but ideas from both “The Silver Turk” (where Mary and The Doctor meet a lone Cyberman) and “Army of Death” (where Mary and The Doctor meet creatures that include living bones) It was like they saw the four Eighth Doctor / Mary stories and threw them all together. Well, minus The Witch in the Well… unless it does and I’ve forgotten, it’s been a decade or so…

Actually, The Doctor showing Percy Shelley his future death to free him of the Cyberium is an odd one, mainly because if you were Percy you’d now go out of your way to not go boating. Ever. Oh well, maybe he forgets? It’s not like living your last moments several years before they happen would hang heavy on your mind or anything…? 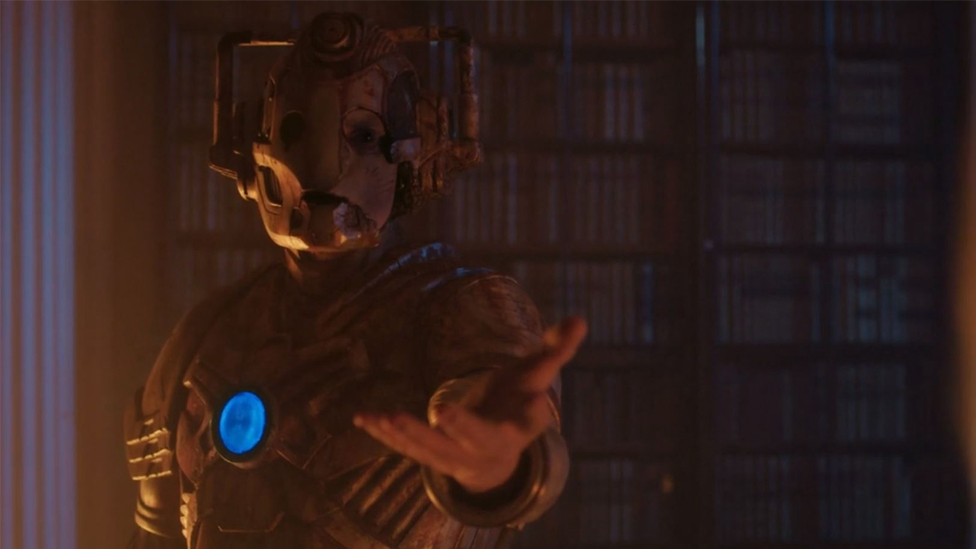 A Cyberman with some emotions left, but is still a bastard. Makes as much sense as all the partially converted Cybermen who were nice, I guess!

Well this section seems rather redundant now, but I guess I’ll repeat myself for the sake of this section being where I link to past reviews. Three of the four Eighth Doctor and Mary Shelley audio stories, “Mary’s Story”, “The Silver Turk” and “Army of Death” all either heavily or mildly inspire this story, with the first two being the most like it, for obvious reasons.

The Doctor mentions Byron’s daughter Ada Lovelace, who she’s met twice now (in the Fourth Doctor audio story “The Enchantress of Numbers” and earlier this series in “Spyfall”). The whole Lone Cyberman warning also came from earlier this season, specifically “Fugitive of the Judoon”. The Doctor mentions having lost companions to the Cybermen before, this is a reference to both Adric from Fifth Doctor TV classic “Earthshock” and Bill Potts from the Twelfth Doctor two-parter “World Enough and Time / The Doctor Falls”. You could also throw Danny Pink from a different Twelfth Doctor two-parter, “Dark Water / Death in Heaven”, into the mix, though he wasn’t a companion… 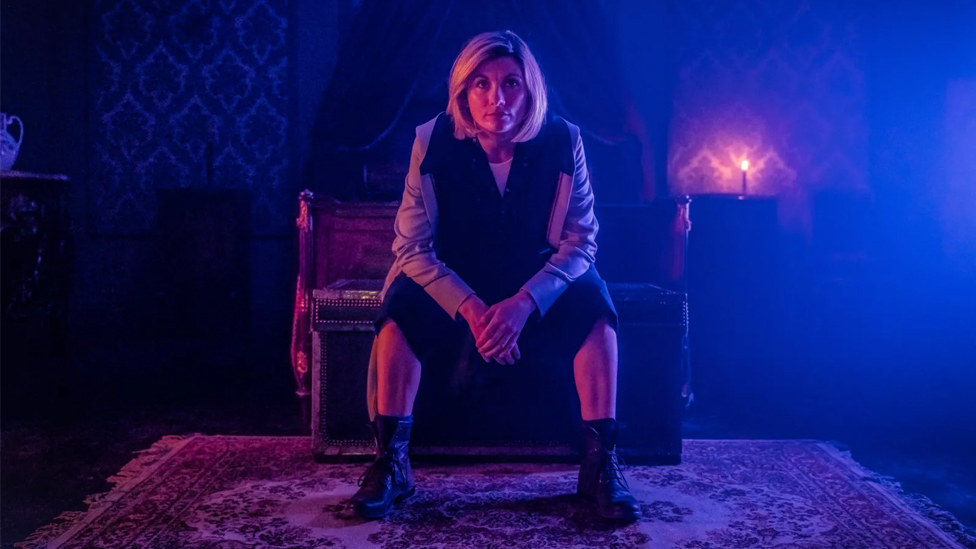 The Doctor is ready for a serious… chat.

The Haunting of Villa Diodati is a great story, steeped in so much creepy atmosphere and with a fun and freaky looking central antagonist at its centre. It also sets up the two-part finale really well, so this story will go either further up in my estimation or down a bit depending on how the next fortnight plays out… Either way, a very strong entry. If they have to over-write a Big Finish story, at least they did it with a great one!