What happens when Fallout has a child with Borderlands? Super Mario Bros. 3! Ha… ha… no, wait… that’s not right. The Outer Worlds! That’s the one! Seriously, The Outer Worlds is just the Bethesda Fallout engine in all but name, with the style and colour pallet more in-line with Borderlands. That being said, those two franchises are great, so this game’s great as well, right? 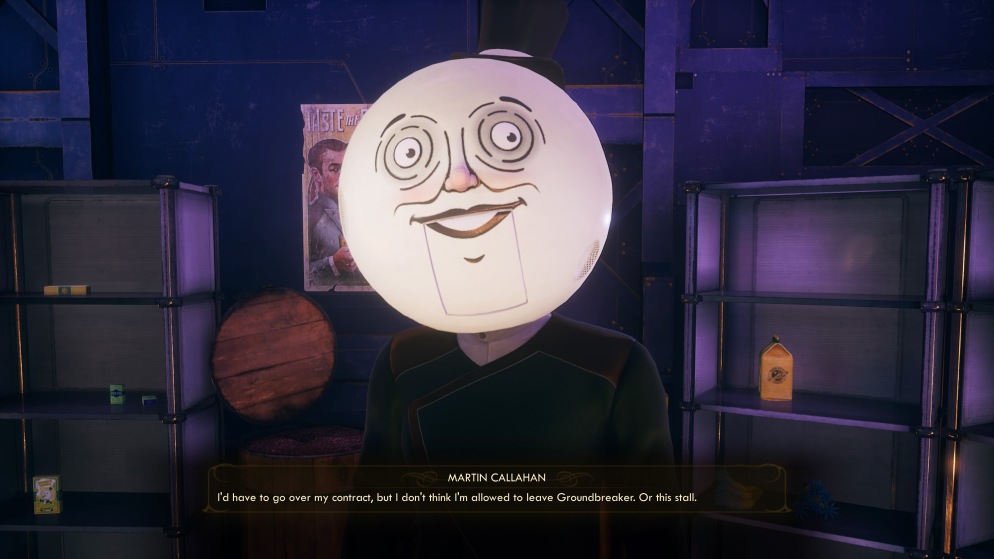 This character was all over the previews / reviews, so I thought I’d …. Join in. He’s mildly amusing!

The Outer Worlds is an entirely new IP by original Fallout creators Tim Cain and Leonard Boyarsky, though it looks and feels far more like the Fallout games from when Bethesda took control, so it seems the duo learned a lot from when they helmed Fallout: New Vegas.

It was released across the PS4, XBOX One and PC on October 25, 2019, with a Switch port planned in the near future.

Always like a good scope, saves … having to aim with a smaller reticle, I guess…?

The gameplay is, as mentioned several times already, just the Fallout engine, in other words a FPS crossed with RPG levelling up and stats managing, but right down to the button mapping being nearly identical (I seriously holstered and reloaded my weapon straight away without being told the controls!) Obviously there are some differences, like VATS, the Fallout system where time stops and you pick a body part to specifically attack, is gone and replaced with a system where you can slow down time in order to aim more precisely. The perks you get to spend points on every other level up are similar as well (carry more things before you become over encumbered, getting better prices at shops, more damage with a certain weapon type, etc) but this time you can also get negative perks, where you become weak to a specific enemy type but get to unlock an extra positive perk as a trade-off. Sounds good, except that by naturally levelling up I brought all the positive perks I wanted, to the point of the last few level ups I just picked randomly, meaning the negative perks are really only if you want to handicap yourself for the hell of it.

There is also a greater focus on dialogue options, where if you have enough charisma and/or intelligence you can often talk your way out of a dangerous situation, rather than fight. This also plays into the NPCs you can pick up on your journey, starting with the A.I. of your very own ship: The Unreliable. It acts as your fast travel method to the different planets in the solar system the game is set in, plus you can store things in it, and talk to the aforementioned NPCs you pick up. This is where the game really shines with me, seeing my ship get filled with a ragtag group of extreme personalities and weird (and often full of dark humour) backstories. The core of the game can be broke down into three: “The Main Quest”, “Companion Quests” and “Side Quests”, in that order in terms of completing the game, though doing all of your crews respective quests nets you a better ending to the main quest.

Apart from all that though, most of your time will be spent travelling to planets, meeting people in various slapdash settlements, and travelling across the wilderness fighting Raiders… I mean, Marauders, and lots of vicious wildlife. You’ll have plenty of guns at your disposal, from standard weapons, heavy weapons and laser weapons, to electric rounds and a type of ray that acts in an extremely similar way to radiation in another series I’m getting tired of mentioning. You can also get one-of-a-kind unique weapons like a shrink ray, which can be fun to play around with.

There is certainly lots of fun to be had, my only complaint being that it felt awfully short, mostly because it lacked the massive map to freeroam around and discover places, instead settling for loads of smaller ones and a more narrowed focus on the stories. Plus it has to be said that the load times are rather atrocious, and I played on a PS4 Pro…

It may be a hard life, but at least you have a lovely view at night!

As you expect for a big AAA game, the graphics look good, very colourful and a fun cartoonish, pulp sci-fi look. While they don’t compare to the very best of this generation, they get the job done.

Sound is good too, I can’t fault the voicework, they all did justice to the exaggerated characters they had to play, and the soundtrack gets the job done, though beyond the title screen music I’m struggling to remember it (and that’s because I heard it isolated so often), so it’s not 5-star, but it didn’t stand out as bad, that’s the main thing. 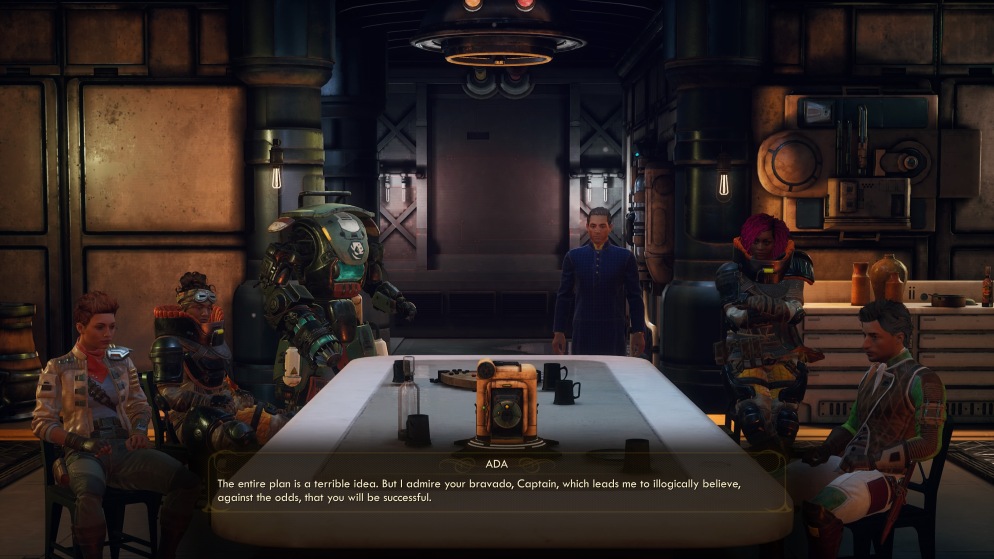 The crew is assembled heading into the final mission.

In the far future of a timeline where big corporations have become the governing bodies of the world, the solar system known as Halcyon was colonised, though one of the two colony ships, The Hope, vanished before it reached its destination. Over 100 years later crazy scientist Dr. Welles finds The Hope and revives one cyro-sleeping colonist and provides him with a means to meet and man and a ship…

This starts your player on his journey to meet various NPCs, pick which side of the mega-corporation vs. the common man war to fight for, and generally help Welles revive the rest of the crew of The Hope. It’s fine, has some fun bits, but nothing that really drives the interest. The ending implies that something has happened to Earth in the meantime, setting up a sequel, I guess…

My main criticism is that even in the far future and within their own new IP, Cain and Boyarsky still couldn’t rip themselves away from the “person emerging into a world they no longer recognise” trope. There must be another way to have a player get told how a world works without making the playable character a stranger…

Checking the dental work of a very dead Behemoth.

I got this game for Christmas last year, played it solidly until roughly the end of January, by which point I’d done everything (well, everything within reason during one play-through). While it didn’t blow me away, I did enjoy my time with the game and would gladly go back for DLC content or a sequel, price and other games depending. Basically, not worth full price, but definitely worth a playthrough when it’s a bit cheaper.