So after a couple of months of delay the big Arrowverse crossover has finally aired here in the UK (well, apart from the Batwoman episode, which I had to, erm… “source” from elsewhere…) and after all that build up it was … Good. Had a few great moments, but it didn’t quite live up to the hype surrounding it. Let’s take a closer look…

It’s the moment everyone has been dreading: the crisis is here and already countless Earths have been destroyed. As the forces of the Anti-Monitor draw closer, only one thing is certain: more than one hero won’t make it out alive… 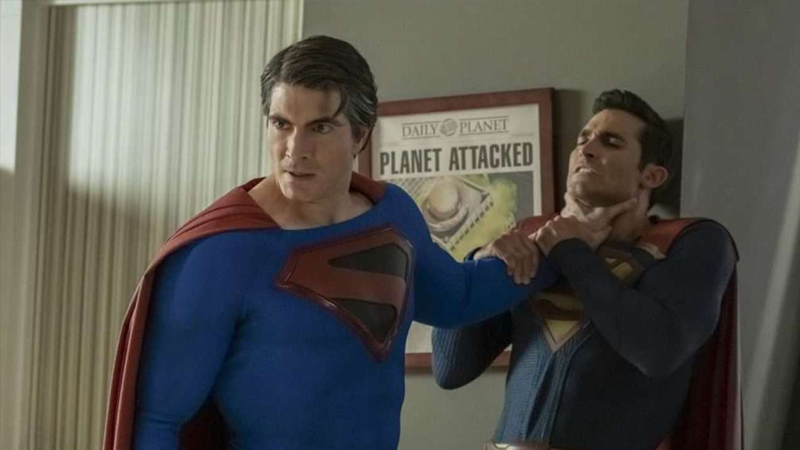 A Super Battle of Super Men…. Each called Superman. Super!

Probably the biggest highlight was the callbacks with the other Earths, specifically classic, dare I say iconic Batman voice actor Kevin Conroy playing a live action version of Bruce Wayne, and Brandon Routh getting to play Superman once again, living up to the potential the Superman Returns script squandered (I think? It’s been over a decade since I last watched the film, I might be getting his great portrayal of Ray Palmer mixed up in my head…)

Conroy’s Wayne was interesting. In order to instil a sense of courage into Batwoman (Ruby Rose), this Earth’s Bruce Wayne had killed all his enemies and even Superman, the latter the cost of his health, forcing him to wear a “Kingdom Come” style metal frame on his body (which is funnily enough one of the few DC comic storylines / spin-offs I’ve read!). Batwoman ends up killing him while protecting Supergirl (Melissa Benoist) and learning a lesson about keeping “the code” and not losing yourself to anger. It was good, and loved seeing Conroy while he did the classic voice!

As for Routh re-Superman-ing, he was playing a rather less pleasant version of the character, not in terms of personality, but his backstory. On this Earth Lois and all his friends at the Daily Planet were killed by a gas attack from Joker, though unlike the Injustice games I guess this Superman didn’t kill the villain and go all evil. It was an interesting take, and it worked with the Kingdom Come (there it is again!) style suit, with red and black rather than red and yellow in his symbol, which he apparently changed to show “there is always a light in the dark”. In general it was just nice for Mr. Routh to get another go, even if I think the Arrowverse version of Superman played by Tyler Hoechlin is better, which was still the case when the two clashed in the storyline.

It’s the seven Paragons! It would look better if the Martian Manhunter would ever actually look like himself rather than a random regular guy.

As I ended up… stepping away from Supergirl mid-way through its previous season, I missed Jon Cryer as Lex Luthor, and it seems was all the worst for it. He’s a great villain, brilliantly self-centred and arrogant, and a whole chunk of Episode 2 where he had the Book of Destiny and started to use it to rid the multiverse of Supermen (despite, you know, the multiverse coming to an end anyway…) was fun, and featured the long-hoped for appearance of the Superman from Smallville, played by Tom Welling, though I’ll admit to having never watched that show, so beyond being aware of it, it lacked the impact it needed. Still, Cryer as Luther was great, and him writing himself in as a “Paragon” instead of the Routh Superman so he could survive the apocalypse was good fun. That was a thing, by the way, Supergirl, Flash (Grant Gustin), Batwoman, Martian Manhunter (David Harewood), Sara Lance / White Canary (Caity Lotz), and Ryan Choi (Osric Chau), a regular scientist who is apparently set to replace Ray Palmer as the Atom later on, are the other six Paragons. Bit of a funny coincidence that all barring one were from the same two Earths we see, but that’s necessary storytelling for ya!

Arrowverse regulars like John Constantine (Matt Ryan), Ralph Dibny / Elongated Man (Hartley Sawyer), Mick Rory / Heat Wave (Dominic Purcell), Cisco Ramon / Vibe (Carlos Valdes), Caitlin Snow / Frost (Danielle Panabaker) and the aforementioned Brandon Routh’s more regular role of Ray Palmer / The Atom all had plenty of great light-hearted lines and scenes to stop the story from becoming too grim. Constantine tracking down Lucifer from… Lucifer, in order to get some help was a particularly great scene, even if I haven’t actually watched that show yet, and I was happy to see Cisco get his Vibe powers back.

The other bits that stood out were The Monitor (LaMonica Garrett) being a good, basic Godly mentor character, and the Anti-Montor (also LaMonica Garrett) being a decent cheesy “destroy the universe” villain. Tom Cavanagh as Nash Wells / Pariah, a man who unwittingly brought the Anti-Monitor to this universe in the first place who is then forced to watch countless trillions die and can do nothing about it, was… fine. No humour in that role, obviously, which is normally Cavanagh’s strong suit. I’ve only seen the first few episodes a while ago, but I did enjoy Cress Williams as Jefferson Pierce / Black Lightning, something about his age and maturity made him standout amongst the other leads featured in the story.

By the end a new multiverse is in place, and Earth-Prime is now an Earth where all the CW shows exist at the same time, so no more Supergirl, Batwoman and Black Lightning being on different Earths to the original Arrowverse shows. Should be fun, and gives some shows like Flash and Supergirl some new villains to tap into, if needs be. 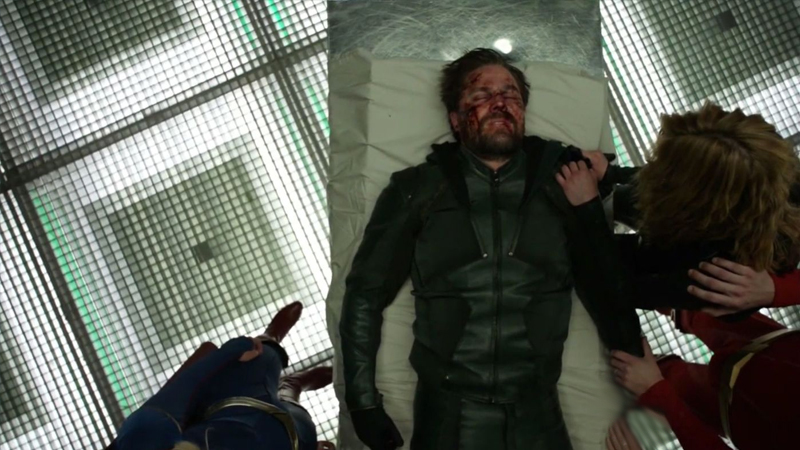 The main bad here has to be the fight scenes. You look at the Earth X storyline from a couple of years ago that saw amazing sweeping shots of the large scale combat, with ships and explosions going on all the over the place, then look at Crisis on Infinite Earths, where the big show down was either in a while-walled quarry where the main cast punch a few generic CG wraiths while the Green Arrow / Spectre (more on that in a bit) has a Dragon Ball style power struggle with the Anti-Monitor, or it’s a showdown in a wet gravel lot where … the main cast punch some CG wraiths and the anti-monitor grows large before being defeated reasonably easily. They are all static shots, no sweeping camera shots, no interesting fights or battles, just basic footage of increasingly unconvincing wraiths being turned to smoke by kicks and blasts. Very poor for such a big moment.

Now I mentioned The Green Arrow / Oliver Queen (Steven Amell) just now, and we’ve known since his previous season that he was fated to die here, and sure enough, he died! … Twice. Which was a really stupid move. In episode 1 of this crossover we see him running towards camera, about to give the billions evacuating that Earth extra time to escape by tackling the crap CG wraiths single-handed, and then the next shot he’s all bloody and near death, Flash, Supergirl and a few others teary eyed around him as he says his goodbye. Like I said, this is Episode 1, so we knew this wasn’t going to stick, so seeing the now cliché Arrowverse teary goodbye had zero effect. Sure enough Oliver’s daughter from the future Mia (Katherine McNamara), his oldest friend John Diggle (David Ramsey) and Sara Lance all go to another Earth to use their Lazarus Pit to revive him.

They only get half way though, as John Constantine takes them to purgatory to collect Oliver’s soul, but just as they have seemingly done it a brand new character pops in says, “I have a thing called Spectre and now it’s your turn, Oliver!” and Mr. Queen immediately turns around to his friends and says “Sorry, I have to do this.” … and that’s it! Ollie later appears as the all-knowing Spectre for two episodes before giving his Spectre-life up to create a new multiverse as he defeats the Anti-Monitor… which of course has some of his allies teary eyes around him as he dies AGAIN, making the whole thing seem like a joke because we saw this three episodes ago and it wasn’t effective then! As everyone settles into their new Earth, they realise that Oliver is still dead, which… makes everyone teary-eyed. For a third time. I think somewhere during the previous few episodes of Arrow I stopped caring about Oliver’s death, and this didn’t help. When I think back to how much better and more impact Stein’s death had during the Earth-X crossover I can’t help but shake my head how they lost it so quickly.

Oh and you know that “Barry Allen will die” message that caused the first half of The Flash’s current season to be a sobfest despite everyone at home knowing the lead won’t actually die? Turned out it was The Flash from the 90s TV show that died, not “our” one. So, that was half a season ruined for no reason! Speaking of Barry Allens, we see “our” Flash run into The Flash from the current DCEU movies in Part 4, when all the Earths had already been destroyed, so… that was odd. It was also played for laughs, which was even weirder that it wasn’t placed earlier in the story. Throw in that the DCEU in struggling to survive and its version of The Flash is unlikely to get his standalone movie, and it seemed like a waste… 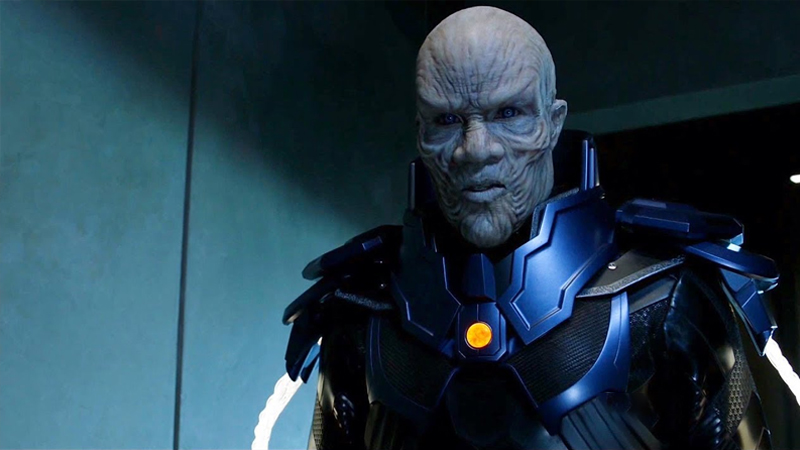 A cheery Anti-Monitor shot to end the review!

While it had its moments, Crisis on Infinite Earths let itself down both in the fight scenes and in the way they handled the big one: Oliver Queen’s death. Those are some pretty big and key things to get wrong! Still, I can’t say I didn’t enjoy myself, there were some good moments to be had, especially in the early parts when we see different Earths. I guess I liked more than I hated, and could see myself watching it again someday, but the Earth-X crossover still holds the title of best Arrowverse crossover, both in choreography and ability to write an emotional death…