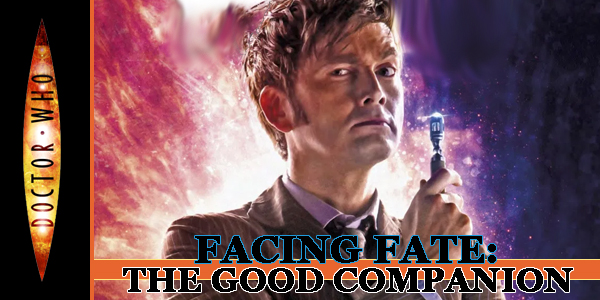 So, after much delay, we reach the end of the current run of Titan Comics’ 10th Doctor and all things considered, it’s a fine send off. While certain things are still left up in the air that I hope one day will be revisited, “The Good Companion” at least had the feel of an epic series finale. Let’s take a look!

The Vortex Butterflies trilogy reaches is game-changing conclusion with devastating consequences for Gabby, Cindy and The Doctor! Will they all make it out in one piece? Or will the fate of these beloved companions be changed forever? 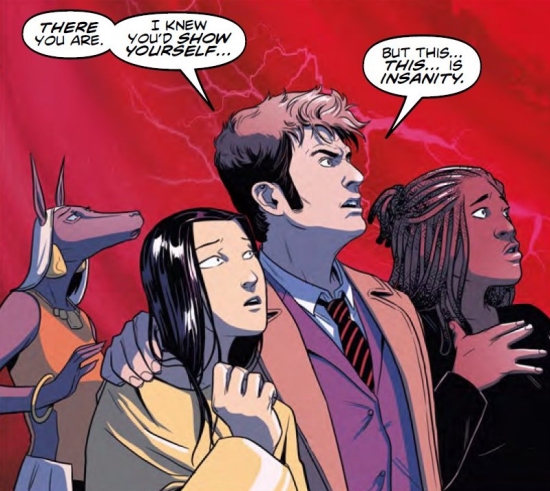 The main crux of the story focuses on Gabby, who has been training with “Block Transfer Artist” Zhe from many issues ago in order to control her powers, and how she has freed herself from her doomed fate from the previous story by having faith in The Doctor. It is put to the test though as The Doctor and Cindy soon leave her without saying a word (nice work guys!) and she gets kidnapped by the other-universe-Nestene-in-the-form-of-a-TARDIS known only as “The Red TARDIS”. For a good chunk of this story we’re led to believe that the Red TARDIS is being controlled by rogue Time Sentinels, the same ball-headed Time Lord guards we saw back in the Fifth Doctor DWM comics, though this time they’re coloured coded! Aspect Red is appropriately “in control” of the Red TARDIS and is trying to use its power to trap The Doctor as his constant meddling in Time is not only giving them extra work (now the Time Lords aren’t around) but is weakening the Time Lock on the Time War itself.

It’s an interesting twist, that these Time Sentinels aren’t doing it out of evil malice or for world domination, just that they see a bigger picture. That’s why it was a shame that Aspect Red was being manipulated by The Red TARDIS who merely wanted to tear a hole in the universe and let more of his kind into this dimension, but hey-ho, it was good for the first three-quarters of the story! Gabby had also been hearing voices and seeing visions and it turns out that the sentient weapon known as “The Moment” from the Time War was guiding her to make sure everything continues as normal leading to Day of the Doctor. That was… a bit unnecessary fanwank, but then those two words are a good description of Titan Comics in general, so I guess it’s appropriate! In the end the Red TARDIS is destroyed and the Time Sentinels purged of the corrupted Reds, but seemingly at the cost of Gabby’s life. Luckily for her The Moment rewards her efforts but popping her into the TARDIS… of the Twelfth Doctor! Great cliffhanger, that remains unresolved…

As for the rest of the story? Well, Cindy just acts like a generic companion (with concern for Gabby, obviously) asking The Doctor questions, and the two meet back up with Noobis and Cleo, two characters that have become “classics” for the 10th Doctor during the Titan run. Noobis is still having that rather stupid teenage crush storyline, but thankfully it turns out his love interest Siffhoni is actually a Time Sentinel spying on The Doctor’s allies, and Noobis goes all Osiran and kills it without hesitation, despite The Doctor claiming this one was genuinely trying to help. It was a good scene that gave a little bit of character back into the reincarnated Anubis.

The art was fine throughout, thankfully. Nothing blew me away, but nothing took me out of the story either.

The only picture I could find of Aspect Red and Blue… Might be from the cliffhanger of the previous volume as well, but… Here they are at least!

The only real bad I can think is how The Doctor himself acts like a bit of an idiot, leaving Gabby alone without telling her despite the fact they just stopped a timeline where a neglected Gabby turned into a universe-destroyer, and then he spends the whole rest of the story just describing events as they unfold but not really coming up with any ideas. Noobis comes up with the crucial plan to stop the Red TARDIS, and Gabby (under the influence of The Moment) gives it the needed finesse to work and pulls it off.

I’ll also mention how now the 10th Doctor Titan Comics have come to end, we’re lacking in detail as to what The Doctor, Cindy and Noobis do afterwards, let alone the whole Gabby thing, but hey, finger crossed, there’s plenty of time for them to release something…

A lot of continuity comes from the Titan 10th Doctor series, like Zhe the artist (“The Arts in Space”) and the Red TARDIS (“Breakfast at Tyranny’s”), plus other returning characters. Makes sense given it was a big finale. As mentioned we also see The Moment from “Day of the Doctor”, making sure the events from the 50th Anniversary special still take place.

The Time Sentinels are based on the being originally titled “Shayde” who first appeared in the Fifth Doctor comic “The Tides of Time”. It is referred to as Aspect Black here, to tie into the whole Aspect Red and Aspect Blue thing they went with. Funnily enough, Aspect Black, if you will, was finally put to rest in the Twelfth Doctor comic “The Clockwise War”, which was released not too long after this. Funny how that happens sometimes!

There was a scene where Gabby literally connects the dots to find out what drives The Doctor, which is of course his companions, and so we’re treated to a splash page of past travellers, including Sarah Jane (with correct hair colour this time!), Martha, Clara and Bill, but also comic (and audio) companion Frobisher and audio classic Charley, making it two Titan comic releases in a row where they touch upon all three of the four media forms I cover on this site (given Novels don’t often feature actors playing companions on the cover, it would be trickier to visually reference that side of things anyway…) 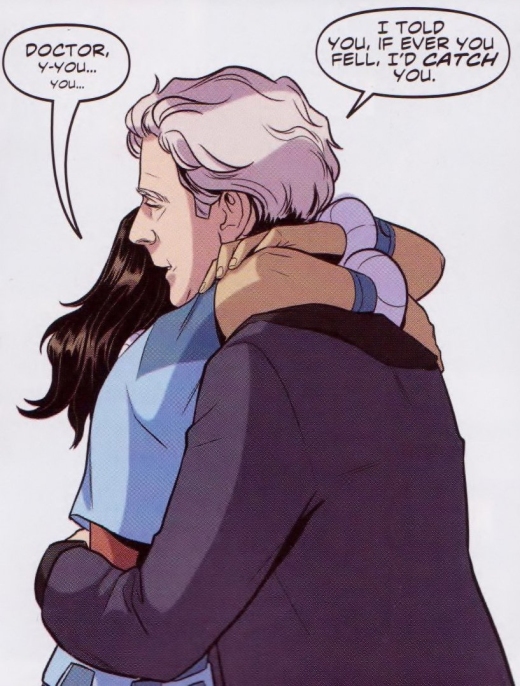 To be continued…. Hopefully, one day…

Facing Fate, and indeed the whole 10th Doctor Titan Comics run (so far, but it’s been a few years, so…) comes to an end with a satisfying big finale, with the usual mix of technobabble and continuity references we’ve come to love from the comic publisher. While a few things drag it down a little, it’s a satisfying end, well, cliffhanger-y end, that I’ve got my fingers crossed will pay off eventually…