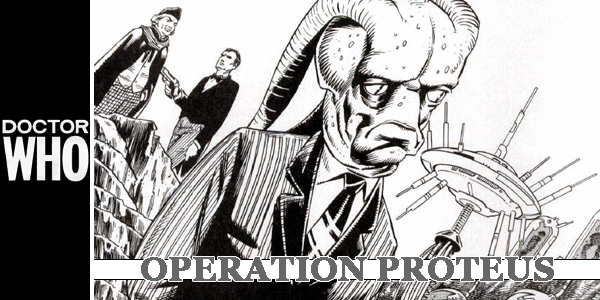 Continuing on with looking at the comic stories contained within the Ground Zero GN, we now go back down the line of The Doctor to see the original (erm, well…. No, let’s just stick with original…) and his Granddaughter Susan in the still relatively rare pre-Unearthly Child period of their lives. Is this another fun three-issue romp? Let’s find out!

The First Doctor and Susan uncover a sinister conspiracy in 1960s London which may transform the history of humanity!

Now, if the Coronavirus did THAT then maybe people would actually stay inside…

An alien called Raldonn is that good old fashioned cliché of being an alien who’s stranded on Earth and willing to do horrible things in order to get his ship back working and leave. In this case he has created an airborne virus that will mutate every human and give him that literal one in a million that will mutate in such a way that they are able to help him pilot his ship. Susan, who is soon to start at Coal Hill School, sees an early test subject burst into unpleasant tentacles and tells her grandfather about it. Although pre-first episode Doctor would probably have just turned tail and left the timezone, he instead investigates and finds Raldonn in his Bond-esque underground lair and swears to thwart his evil plans.

What happens instead is Raldonn unleashes the virus but ends up getting killed by one of the resultant mutations. The Doctor does manage to create a cure before any major damage is done to the populace though, so he’s still a hero… or something. Overall, it’s a fun story, with lots of really great, and gross, imagery.

For someone saying the word “monstrous” a lot, he doesn’t seem that bothered…

The only bad here is that, no matter how you slice it, the story doesn’t feel of its era. Solo “First Doctor investigates” just doesn’t feel right, and there is far too much violence. That doesn’t make it a bad story, but does make it feel… odd, or wrong while you’re reading it. I will give credit that an alien called “Raldonn” is very of the era though!

For seeing someone suddenly turn into a hideous blob monster in front of her eyes, she doesn’t seem to care much…

Not a lot, as this is set before even the very first story, “An Unearthly Child”, and features a character / race never seen or heard from again.

There is a panel were Susan is talked to off-panel by someone in the same manor Peri was in the previously published story “The Curse of the Scarab”, which gets resolved in “Ground Zero”. 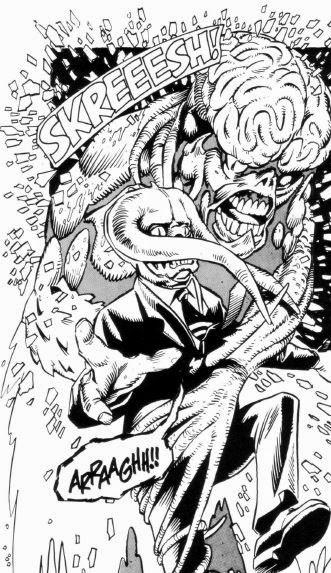 Suddenly feels like I’ve reviewing Resident Evil again… because of the creature in the back, rather than the alien in the suit!

Operation Proteus is a perfectly fine story. It has great artwork, a fun villain and is paced decently enough, it’s just the fact it doesn’t gel well with the period that hurts it. Still, a fun story, and continues the streak of fun stories started in the previous comic…