Scrolling Sundays moves into week two, and with it the second (and I’m pretty sure last) game on the list that I didn’t actually play back in the day. I’ve already reviewed the original, and DD III is up next week (which I actually owned on the Mega Drive…) so given I have access to it via Nintendo Online, I thought I may as well complete the original Double Dragon trilogy rather than leave this out. It’s safe to say “The Revenge” is a big improvement over the original, but by how much? Let’s find out!

“Oh God! I was just walking by, I have nothing to do with this! … Stop kneeing me in the face!!”

Much like many games on this weekly feature (ignoring the ones that are actually Arcade game reviews), Double Dragon II started off as an Arcade game, one with superior graphics and sound, unsurprisingly, but also completely different stages and bosses, so… that’s one to look at if this thing ever reaches the point where I run out of games in the genre I own and / or have already played.

The NES version of Double Dragon II was released in Japan on December 22nd 1989, and in the US and Europe the following year. It was also ported to the Japanese PC Engine’s “Super CD ROM” add-on in March 1993. 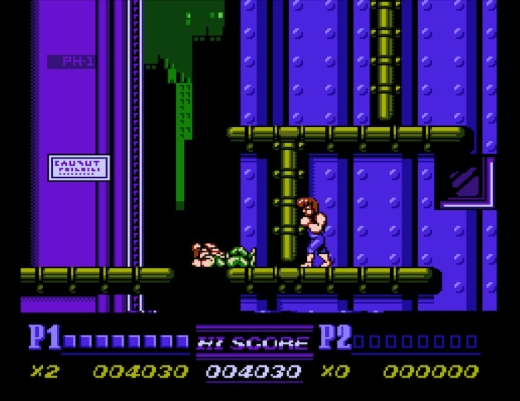 Bah! So close to falling down the pit…

This is where the Scrolling Beat ‘Em Up formula is starting to take shape, as we have punches, kicks, jumping kicks and special moves like the jumping Cyclone Kick or the Hyper Uppercut (done while crouching!) are unlocked right from the start. Sadly the limitations of the NES mean you only face two enemies at a time, and they’re always duplicates of the same foe, but at least this time you can have two human players on screen at the same time!

You can pick up weapons like pipes, whips and even grenades, and throw various items as well. The levels are well designed and varied, including a now-famous level set on a (presumably quite large) helicopter with an opening door that sucks you and your enemies to oblivion if someone gets close enough to it, plus lots of… *sigh*, tricky platforming. This where the game falls in my opinion, I play this genre to let loose and have fun, not to have to carefully time jumps with awkward controls. Some you can only safely make by doing one of the special moves to propel yourself higher than normal, but at no point is this explained.

Ah well. The game does quite good on the genre cliché-o-meter, with questionably attired whip women, ninjas, large pits to fall in (or throw people in!) and a level full of conveyor belts. No lift level or fat guys though, let alone fire breathing ones … 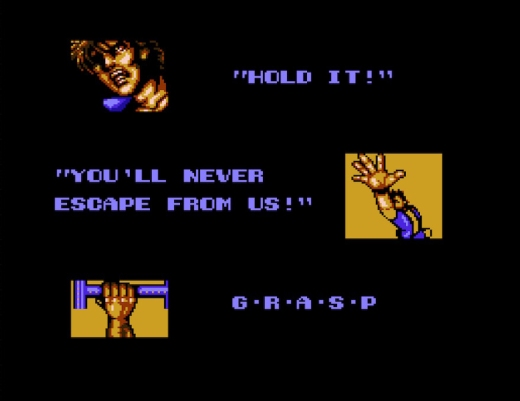 The graphics are a good step up from the original NES game, with bigger and slightly more detailed sprites, plus far greater detail in the backgrounds. The colour scheme with some levels still leave a lot to be desired, mind you…

Sound is good! Sound effects have a good thud to them and the background music is extremely catchy and changes from level to level. Like I said, this is a good example of where the genre will end up when it reaches it 91/92 prime.

I’m pretty sure I saved five pictures, but I can’t find the fifth… Sorry! It was, erm, me defeating the final boss, yeah… *ahem*.

Remember Billy’s girlfriend Marian, who was kidnapped in the last game? Well, imagine that, but instead of Billy and Jimmy going to rescue her, she’s instead been murdered and, as the title suggests, this is all about stone cold revenge. Yikes! The “Shadow Warriors” are the ones responsible, which sound like they were invented by me when I was six, but there you go…

If you complete the game on the hardest difficulty, therefore getting you access to the ninth and final level, you find out that Marian was definitely killed, but mysteriously comes back to life thanks to some sort of ninja prophecy, or something….? Great cop out! Could’ve at least come up with some sort of valid reason, surely?

If there’s an iconic stage from this game, this is it!

Double Dragon II: The Revenge was great fun, I legitimately forgot to continue pressing the screenshot button during Stage 4, but I soon grew frustrated with the poor platforming. Now I’m sure if I put the time in to learn it I’d get past it and go further, but right now I’m not bothered. (Plenty of nostalgic games to get to!) I can’t say it’s not well made and a lot of fun, especially given how early an example of the genre it is. After a struggle to start with and a poor follow up, this was a nice reminder as to why the series is beloved by so many. I just got unlucky with the ones I played first…