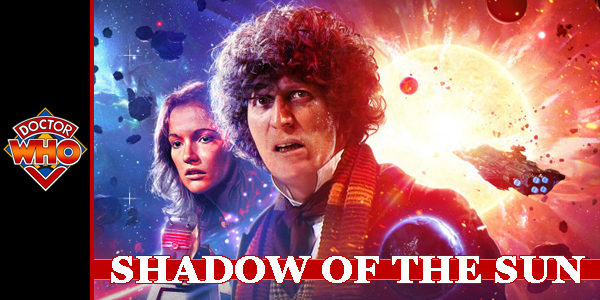 Shadow of the Sun is a “Lockdown Special Release”, recorded entirely from the casts’ homes. How does that effect the release? It doesn’t, other than a bonus Fourth Doctor release in May… which sounds good to me! The actual story is two parts bog-standard run-around, one part interesting religious examination. Does that mix work?! Let’s find out!

After an accident, the TARDIS lands on a luxury star-liner. Leaving their ship to repair itself, the Doctor, Leela and K9 find themselves facing a great terror: mingling at a cocktail party.

Something seems awry behind the pleasantries, however. Guests are going missing, and equipment is breaking down. When the Doctor investigates further he discovers that the star-liner is literally on course for disaster.

But no-one seems surprised by this information, still less troubled. What’s going on? And can the Doctor and his friends save everyone… when nobody wants to be saved?

So as the synopsis says, The Doctor, Leela and K9 arrive on a luxury star-liner and are guided to a big party by the auto-pilot, the auto-pilot we heard kill someone at the very start of the story. After some talking and mingling The Doctor meets Dr Suleiman Zorn (Paul Herzberg), the leader of this flock of people, and soon discovers he’s the leader of a cult that believes a heavenly realm called “Heliotopia” exists in the centre of the sun… Sure enough, The Doctor checks the course and it’s full-speed ahead towards our solar-system’s star. This all leads to the rather predictable “The Doctor and co. are accused of killing the missing passenger” routine, sadly. Eventually though they convince the ship’s Captain Brandis (Glen McCready) and the trips main financial backer Lady Malina Rigel-Smythe (Fenella Woolgar) to escape.

The man who arranged the death of the first passenger and was in control of the auto-pilot was First Officer Hix (Barnaby Edwards) who was going to make a good chunk of money via insurance. Leela tries desperately to convince the cultists that their beliefs are wrong and will only result in their deaths, but only two people come along with her to be rescued. That was the good bit, really. The Doctor being upset that he was only able to save so few from their own beliefs was an interesting idea and the final scene of the worshippers readying themselves to enter their holy land only to be burned alive horribly was quite the harrowing scene, especially as Hix was converted moments before (out of desperation, most likely). I mean, I’m ignoring the obvious sign pointing to climate change deniers, but thankfully the message is never too heavy handed so as to distract you from the story.

Great cover, as they all tend to be nowadays. I wonder where the CG ship came from?

I guess the lack of originality. The Doctor gets put behind bars for being mistaken for a murderer, the ship’s otherwise pleasant sounding A.I. is actually “evil”, Leela and K9 escape via some vents, the villain was in it for the money and gets done in by his own plan backfiring, and the Captain pulls a gun on The Doctor as he’s about to sacrifice himself and does it instead at the Doctor’s protest. I don’t know what timeframe this was written in, but it does scream like it was written quickly so they got their Doctor Who cliché book and followed it letter-by-letter.

Nothing really comes to mind. It’s very generic so it kind of feels like a lot of stories, but it does connect to anything specific.

Shadow of the Sun was more about making the best of the currently bad situation and getting some good press out of it, and for that I’m sure it worked well. As a story in its own right, it’s pretty generic, and if it weren’t for the religious spin and dynamic it wouldn’t be remotely memorable. At two-episodes long it reminded me of a lot of the first few series of the Fourth Doctor Adventures, mini-stories that are fine but you’ll forget about in no time flat… Average it is, then!