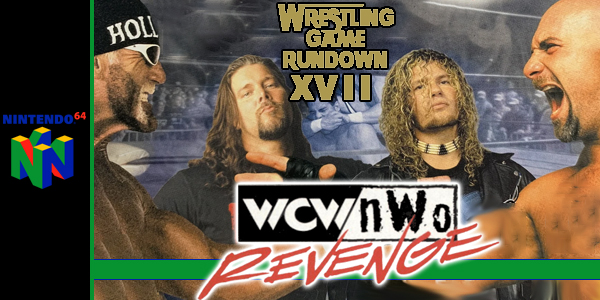 Yay, another AKI Engine game! Man I played this game TO DEATH back in 98/99, and several times afterwards due to the great roster and never-gets-old gameplay. I don’t know what else to say about this entry in the Wrestling Game Rundown, so let’s just get on with it! 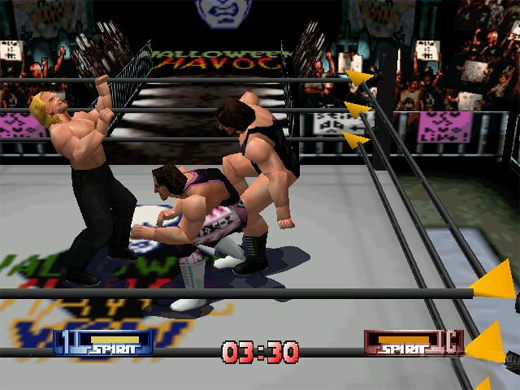 Bret Hart jumps ship, straight from War Zone to Revenge! … and gets a kick up the arse for his trouble.

WCW/n.W.o Revenge was released exclusively on the N64 on October 26th 1998 in the US, and November 30th 1998 in Europe (just in time for Christmas 98, which was handy for me!) Now the end of 1998 is when WCW was finally beginning to lose their grip on the Monday Night War, but as this game was in development for roughly a year, the roster is based on WCW during their height, or maybe a little after it (depending on how you feel about the whole n.W.o splitting into the Wolfpac story) so it has an impressive line up.

It also featured several non-playable (without using extra controllers) managers like Dusty Rhodes and Rick Rude, but as you can’t actually play them in a match, I don’t count them as being on the roster. There are also the usual array of Japanese talent reskinned and renamed to pick from as well, with legends like AKI Man, Kim “Bee-YAY!” Chee and Han Zo Mon living in my memory forever… 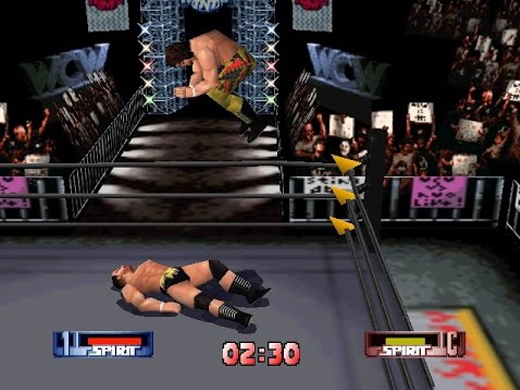 Another Malenko vs. Guerrero classic!

During all this action you build up “Spirit”, and once you have enough Spirit and hit the taunt button you go into “Special” mode, where you can hit your finisher by grappling and hitting the analogue stick, as well as finishers in different positions that will just automatically work if you’re on Special. You can block strikes, step back to avoid grapples, and do running strikes, top rope moves, corner grapples, dives to the outside and can grab weapons from the front row of the audience, including new weapons like the giant STOP sign. The main thing though is that all the moves have a real feeling of impact that makes the AKI Engine so much fun to play, especially now there are so many more moves in the game.

You can adjust the rules to the match types (Singles, Tag, Battle Royal, the latter of which you can put the number up to 40 and have rumble style entrances) to include pin, submission, TKO, count out and DQ. TKO can happen with a well-placed heavy strike (extremely satisfying!) or after a finishing move. Sadly the Battle Royal rules can’t be edited much, unlike later AKI games, but there is blood, which ended up being removed for the next two US/European released games. There is also an interesting “Strike Grapple”, where you grapple and then press buttons to do various strikes in a row and then end with a grapple move. It’s very odd, but I quite enjoy it, as did my friends, so it was a shame to see it removed for the two WWF games. It also added a cartoon ref drawing appearing in the bottom right of the screen and a replay system in the middle of matches, both of which were so annoying I immediately turned them off in the options and so nearly forgot to mention for this review! 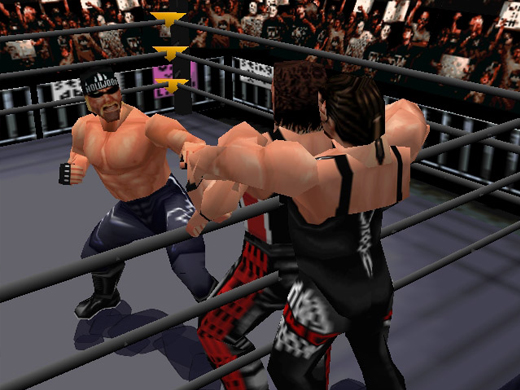 Who wants to bet that Nash dodges out of the way and Hogan his Adams by mistake?

They actually have proper arenas and entrances, though the music is just two generic tracks and the transition between the entranceway and the ringside a bit… obvious, and when you win a match you get a replay of the last 30 odd seconds and then a stats screen… rather pointlessly (apart from Rumble matches!).  Alongside exhibition matches you can pick “Championship Mode”, where you pick either the Cruiserweight, TV, Tag, US or World titles, and run through a gauntlet of opponents before facing the champion/s, who once you beat you unlock, so very similar to the previous game’s “League Challenge” mode, but with less Mohammed Ali.

You also have an edit mode, where you can change the names of the wrestlers (to something different on each of the four attire slots if you wanted) and edit their costumes using existing costume parts in the game and changing the colours. This meant quite a few new members of the n.W.o in my game, edited to wear n.W.o shirts and jeans, plus a couple of characters had “hidden heads”, like Scott Steiner had his non-beard, long black hair head, and Juventud had his masked head as well. I used the renaming second costumes thing to create my own characters for those two new heads, which shows how this was the prototype for the Create-a-Wrestler mode featured in the next AKI game… 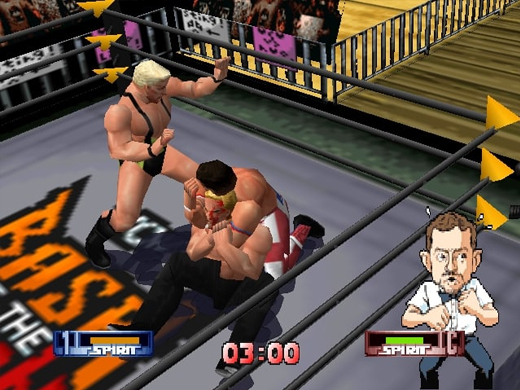 … Oh yeah, that’s why I turned the animated ref off straight away. Man that’s annoying.

The graphics are a great improvement from World Tour, the models are more detailed, the presentation is brighter and the arenas have better textures for the canvas/rope/guard rails etc. This going along with the still buttery smooth gameplay makes for a great time.

Sounds is fine too. The roar of the crowd and “shocked crowd” noises are all good, the cartoony strike hitting sounds are still fantastic (less so the weird twisting rubber sound when submissions are applied), the voice samples like screaming when tapping out and referee calls are perfectly audible, and the music is fine, though if you’re like me and my friends you’ll be turning the in-match music off quite quickly due to repetitiveness. Can’t really argue, apart from maybe the solitary two pieces of entrance music… 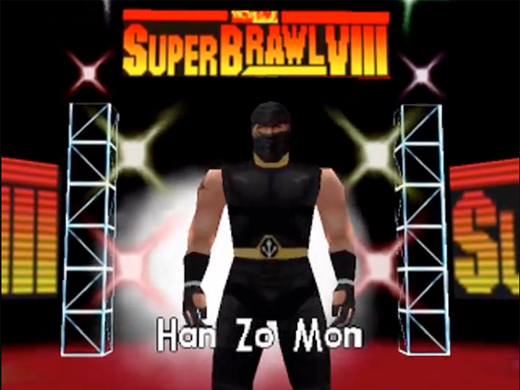 The man, the myth, the legend. Well, except I renamed him “Black Ninja” back in the day, and his other coloured alts. “Blue Ninja”, “Red Ninja” and “Green Ninja” respectively, and used them as a faction… man I had no imagination, apparently!

N64, four controller ports, multiple friends round the house (or at their house), four controllers, this game. That was how a lot of hours were lost (that and Goldeneye, obviously). Hell, just me by myself, that’s was how many hours were lost. I still have a notepad I used to track fictional title histories and full on top-to-bottom PPV match cards that I “built up to” using the Nitro arena as TV… As clearly better as WrestleMania 2000 and No Mercy were, and as much as I played the latter far more over the years, this game does hold a special place in my heart. 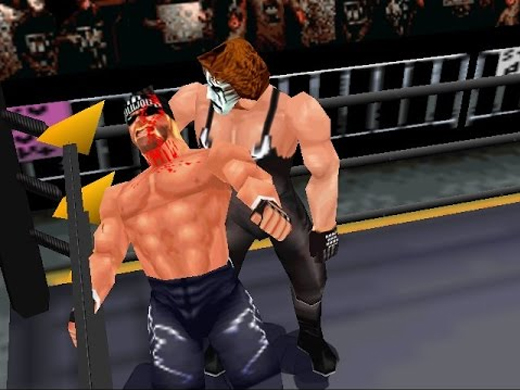 Serves Hogan right for wearing his sunglasses during the match…

As I said in my previous AKI game review, these games don’t really age. Sure, the graphics do, and older AKI games aren’t as good as later ones (as you’d hope that would be the case!) there are still infinitely playable. This is undoubtedly the best WCW game ever, and has one of the best top-to-bottom rosters in a wrestling game period. No, I don’t care what came after it, I can’t say this is anything other than still a great game to play, even if the company it’s based on has been dead for nearly two decades…