I brought Double Dragon III quite cheap at some point in my childhood, thinking it would “be like Streets of Rage”, a series I loved to death. Sadly, I was wrong, as Double Dragon III is … not good, or at least not the Mega Drive port anyway. It’s slow, unresponsive and not very pretty to look at, and it didn’t take long for me and my friends to head straight back to SoR2. Did I not give it a fair shake, or was I bang on the money? Let’s find out…

Calmly ignoring the bikers jumping behind him, Billy looks both ways before crossing the road.

Double Dragon III was originally released in Arcades, as they all are, and while a “not at all like it” port was released on the NES like the previous game I reviewed, this Mega Drive port was a much more faithful one, by all accounts (with the exception of only being 2-player simultaneous, compared to the Arcade’s three). It was released in North America in November 1990 and Japan two months later. Can’t find info on the European release, but since I had a copy and no way of playing imports back then, it presumably had one!

If only these guys breathed fire like any self-respective overweight scrolling beat ’em up enemy would, the game would score another “point”.

At its heart Double Dragon III is still very much a Double Dragon game, though will no NES-forced platforming sections (though a level full of archers, which is just as annoying, frankly!). You can punch, kick, jumping strike, running strike and grab people for throws or a close kick (rather than the old “knees-to-the-face” combo). You have some special moves as well, though a lot of them have to be brought at the shops that appear at the start of several levels, making this game feel like a cross between the first two games in this weekly feature! Sadly (in a way…) nearly all bosses can be defeated by grabbing, doing a handstand on their heads, kicking them to the floor and then jumping on their bodies. Rinse and repeat. I wish I knew that back in the day, then maybe I could’ve gotten further than Bruce Lee at the Great Wall of China (weird sentence…)

Also available to buy in these shops are “Extra Guys” (that is the actual term the shop uses) but unlike traditional extra lives they’re actual other characters you take control of if the Lee brother you’re play as dies, and they changed depending on which level you’re on. If you buy an Extra Guy in America (Stage 1) or Egypt (Stage 5) and die you play as one of the Urquidez brothers (Roney and Sunny) who are generic fighters based on an early pioneer of what would one day become MMA. If you die with an Extra Guy in China (Stage 2) then you play as either Seime or Taime Chin, depending if you players 1 or 2, who are “Tai Chi experts”. Finally, in Japan (Stage 3) you take control of Masao or Kunio Oyama, generic Karate guys. It’s a fun system, though I often found the bonus characters movesets worse. Plus I have to say I was baffled the first time I played, died during the China stage and suddenly was controlling some “generic Chinese guy in a hat”, as I remember describing it, like it was a glitch.

As for genre clichés? (which has become a fun thing I’ll be doing) it doesn’t score well, or scores well depending on if you think breaking free from cliché is a good thing. No lifts, conveyor belts, fire breathing fat guys (though there several regular fat guys) or questionably attired ladies. There are some ninjas though, so… that’s something!

Beyond the shop and odd lives system, it is just a bog standard Scrolling Beat ‘Em Up, just with really slow moving sprites and a slight delay to move inputs. At only five levels its short even for the genre, but unless you use the grapple and kick spam you won’t make it very far…

The graphics aren’t great. I mean, it was relatively early days for the console, and the sprites themselves are fine though quite small, but there is just an undetailed and muted colour feel to it that you get with a lot of early MD games.

Background music is loud, unmemorable and sometimes annoying, and soundeffects are okay, but the animations aren’t good enough to cover for them, giving the combat a dull and unsatisfying feeling.

Masao back suplexing Mummies is what I think of when I think of Double Dragon, I don’t know about you!

The story is… odd, to put it bluntly. Billy and Jimmy Lee have been on a training journey for two years, and when then return home they happen to meet a fortune teller who randomly informs them that “in order to challenge the world’s strongest adversary” they need to collect three Rosetta Stones. After a brief walk around the old neighbourhood to defeat some remnants of the Black Warrior gang they head off to China, Japan and Italy to collect the three stones, then take them to Cleopatra’s tomb and defeat an ancient Mummy followed by Cleopatra herself.

I can only assume they then shrug, head back home and ponder about the crazy shit that can apparently just happen when you talk to a complete stranger… 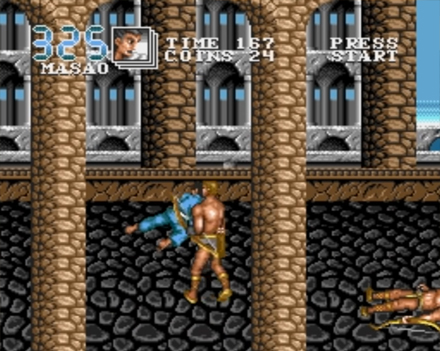 The worst thing about this part of the level is the pillars in the foreground making it hard to see… Poor level design, right there.

As I said in the opening paragraph, the name brought back memories of my brief time with the NES original, and still being on a high from the Streets of Rage games I brought it assuming it would be the same, and while the genre was the same, the actual gameplay was not. Playing this after the buttery smooth SOR2 is quite the experience, let me tell you. I played this so little my only memories were of being confused about the extra life being a different character, and getting annoyed at not being able to beat the Bruce Lee-a-like at the end of the China level (though I remember the generic karate guy, so I must have gotten to Japan at some point…)

The secret to victory finally revealed!

Now? Pretty much exactly the same. Just a quick thought back to the SOR or Final Fight series, or pretty much any CAPCOM Scrolling Beat ‘Em Up, makes this combat feel sluggish and boring, without the excuse of being an 8-bit game (though given the fighting in River City Ransom is really smooth, that’s not even an excuse either, really). Throw in the fact it looks a bit crap and Double Dragon 3, at least on the Mega Drive, can be safely skipped.