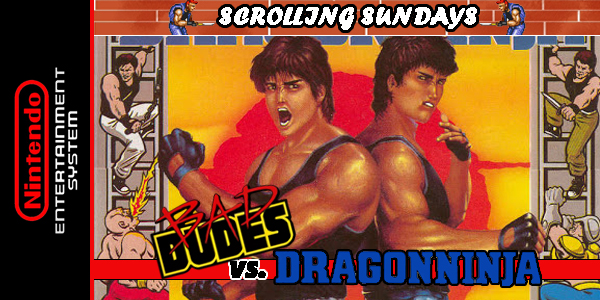 Any game that has an opening that reads “The President has been kidnapped by ninjas. Are you a bad enough dude to rescue the President?” deserves respect for not giving a crap about any kind of serious plot and having a laugh with itself, but is the actual game good? This is one of the only completely side-on, 2D Scrolling Beat ‘Em Ups I’ll be covering, but it’s also possibly the earliest example of the genre I actually played. Let’s see if I’m a bad enough dude to give this game a fair shake in 2020, shall we?

A Bad Dude punches a DragonNinja.

Like so many of these games, this title started life off as an Arcade game, in this case released in April 88. The Arcade version has bigger sprites, nicer graphics and is 2-player simultaneous, but otherwise isn’t as different as the Double Dragon NES games I’ve talked about.

“This seems a tad risky, can we wait until later?”

You walk to the right, you punch or you kick, and in doing so you defeat most enemies in one or two hits and send them flying off the screen. Enemies can come from the front, behind or suddenly jumping from off-screen. You can get powered up attacks, do spinning kicks or collect weapons and you can jump from the top screen layer to the bottom and visa versa, but that’s about it. It’s very basic, but has the excuse that it was the 8-bit era, unlike say, the first thing ever reviewed on this blog… Where’s your excuse Last Battle?! Huh? HUH?!

Anyway, at the end of each stage you face a boss. They have actual health bars and unique attacks, including the first boss Karnov, who breathes fire! He may not be fat, but he’s the first sign of the cliché to come! Other than that and having the ninja foe cliché be its only enemy type, this doesn’t have any other of the clichés, being such an early game.  It’s advertised as 2-player, but it’s Super Mario Bros. style take turns rather than the Arcade’s same-screen multiplayer.

Like I said I tend not to count games where one hits defeats the enemy as Scrolling Beat ‘Em Ups, just because it doesn’t feel like you’re beating anyone up, but there really isn’t another genre name for it, and this does feel like the beginnings of what’s to come (again, for me who never really played River City Ransom or Double Dragon I or II growing up). I also have to mention that it’s hard as hell. Like, properly “must get people to put more money in the slot, even though this is a console port” rock hard. 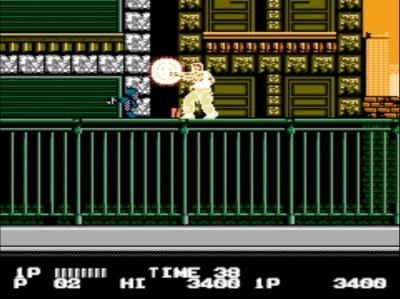 Graphics are basic, as you’d imagine. The sprites aren’t bad though, neither are the running and jumping animations. Even the backgrounds are fine, they aren’t super detailed, but I’ve seen worse.

Sound is a little repetitive, music wise, but I love the Stage 2 music. There aren’t that many sound effects (beyond your playable character shouting “I’m Bad!!” in a really distorted voice when you beat a level) but they’re fine when they do happen. Again, much like the graphics, it’s just a regular example of the 8-bit era, it doesn’t impress you by pushing the technology, it doesn’t underperform either.

“The DragonNinja” have kidnapped the President (named Ronnie in the Arcade version) and Blade and Striker (yes, really) are the only bad enough dudes to save him. Which they do. They then eat some hamburgers with President Ronnie to celebrate. SUCH DEEP NARRATIVE! 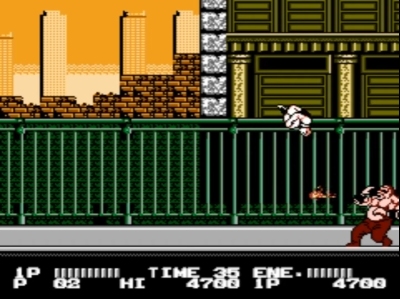 I played it quite a bit on my brother’s NES. I remember beating the claw ninja at the end of the truck stage (… Stage 2) but not getting much further. Still, I remember taking a lot of the generic ninja Action Force figures (GI Joe, for those not in the know!) and doing various very similar games using them and some shoe boxes for trucks, so I guess at least the second level made some sort of impression on me…

Nostalgia got me through the first two levels, then I died on the third (which is also nostalgic) and although I gave it another couple of goes and got a lot further (well… Stage 5) it doesn’t hold your interest. It’s so basic and so unfairly difficult that it just can’t hold my attention for that long. Sadly it’s an 8-bit game that just hasn’t aged well, which is actually rarer than you’d think (I’m obviously not talking about graphics, for the record…)