Now if we’re talking about the games I played and actually owned growing up, then Final Fight is first, release date chronologically (though I actually first played it on the Mega CD, meaning after I played the Streets of Rage games…) and it’s a great example of the genre. It may have been inspired by Double Dragon’s success, but it itself inspired many games after it, mostly from Capcom themselves. So let’s take a look at Final Fight, the first of a trilogy, making the title technically incorrect… 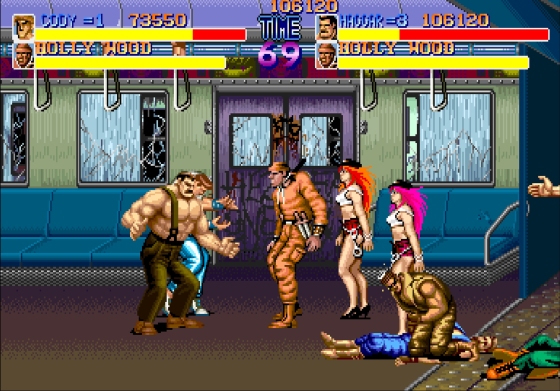 Cody slowly pulls himself free from Haggar’s body, ready to join the fight!

Final Fight was released in Arcades in December 1989, which given the original title of the game was going to be “Street Fighter ‘89” means they were close to not making it! Yes, the original idea was to have Ryu and Ken as lead playable characters but they eventually went in a different direction, creating the lead trio of Haggar, Cody and Guy instead. That being said, as I’m sure you know by now, the entire Final Fight cast has since become integrated into the Street Fighter lore anyway…

Although we’re talking about the Arcade version here, I’ll mention its ports. A SNES version appeared in December 1990 in Japan, November 1991 in the US and December 1992 in Europe. It was HEAVILY edited: no 2-player, only had Haggar and Cody selectable, the entire stage 4 was removed, as were transitional scenes between rounds and the number of characters on screen at one time. The US/European version went even further with female enemies Roxy and Poison being replaced with male enemies Sid and Billy, all alcohol references being removed, final boss Belger’s wheelchair was redrawn as an office chair, and blood was replaced with weird explosion effects. It was re-released later as “Final Fight: Guy”, which was actually the same game but now you could pick between Guy and Hagger instead of Cody and Haggar, and there were some new difficulty options. Safe to say, it wasn’t good…

The Mega CD version (released in April/May 1993) I played growing up was a lot better. It kept 2-players simultaneous, all levels and all three characters, plus Roxy and Poison were in the game, albeit with more clothes on. There were more characters on screen at once as well, though still not as many as the original version. CD soundtrack too! Now, it was still partially censored and the colour palette was muted, but still… better! There was also a great port for the GBA called “Final Fight One” which included cutscene art and sprites from the Street Fighter Alpha series. The Arcade version has been released as part of various collections like “Capcom Classics Collection” and “Capcom Beat ‘Em Up Bundle”, the latter is where me and my friend played it for this review!

Basically, you scroll right across the screen and beat people up! One button attacks, one jumps, if you hammer the attack button you do a satisfying combo, and you can jump and attack. If you walk into an enemy you grapple them, then you can do a grapple punch combo or throw them across the screen (or piledrive them into the floor if you’re Haggar). This is the first Scrolling Beat ‘Em Up I know of that has the “Special Attack that comes at the expense of your health” system. Press attack and jump at the same time to do a powerful special attack that’s handy for crowd clearing, but as mentioned, it comes at the expense of a chunk of health so you have to judge “will the health I lose be less than the health I’ll probably lose if I keep getting attacked”. It’s a nice extra layer.

It’s also among the first games to have health pick-ups in destructible barrels / scenery, plus the useable weapons you can pick up off the floor and use like previous games covered on the blog. Like Street Fighter would eventually make popular it also has two bonus levels where you beat up a car (with the now famous “Oh! My car!” quote that was originally “Oh! My God!”) or some glass. Overall it’s a very satisfying Beat ‘Em Up.

As for clichés? Plenty, especially the fire-breathing fat guys, a lift level and questionably dressed women (though no whips!), plus sort-of ninjas. It also has a wrestler opponent, which is a common theme across the genre, as well as one of the selectable characters being a wrestler. 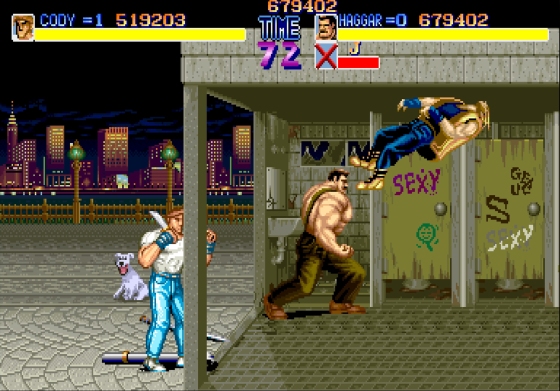 Hmmm… what to mention, the dog with the huge grin, or the bathroom stall with “Sexy” written on it… Why not both?!

The graphics are full of nice big and chunky sprites, with good backgrounds and some nice level design. You can certainly tell the difference between an Arcade game and a console at the time…

Sound is great. Lots of catchy and memorable tunes, the physical sound effects layered on top of the nice hitting animation makes the combat extremely satisfying. 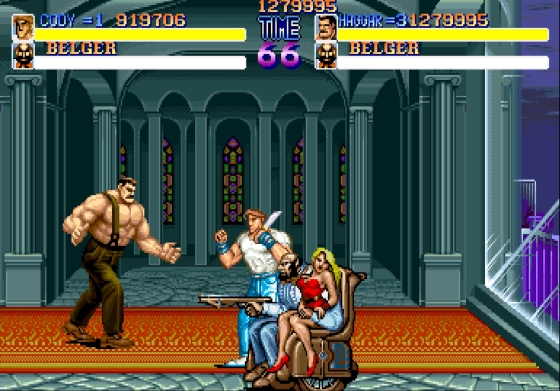 Cody… has apparently taken the side of the man who kidnapped his girlfriend. Odd, I swear that doesn’t normally happen…

Mayor Mike Haggar’s daughter Jessica has been kidnapped by the Mad Gear gang, but unluckily for them he’s a former pro-wrestler! He teams up with his daughter’s boyfriend Cody and Cody’s martial-arts-trained friend Guy, and the three of them beat the hell out of every member of the gang right up to the big boss, who gets knocked out of a window. Jessica is saved, but Cody walks away, still focused on beating people, much to Guy’s displeasure.

Cody being unable to pull himself away from beating people up is why he’s in prison during the Street Fighter Alpha / SF IV time period, so that final cutscene did have some impact later on…

Always nice to see Rolento’s debut. He was one of my favourites in SF Alpha 3.

I loved playing Final Fight CD, it was one of my most spun discs back in the day (that’s not saying much, mind you…) and I was really impressed with the big sprites. Did I like it more than Streets of Rage? No, but I think that was mainly because it was far… far more difficult. I completed all the SoR games by myself and with a friend, I don’t think even with a friend I completed FFCD. Still fun though!

I was playing as Cody during this playthrough… why are nearly all the screenshots me on the floor or hurt?

Final Fight is still a very satisfying game to play. Big sprites, good combat, decent length, and infinite continues via the Arcade port! Hooray! Seriously though, if you want to take a trip down this genre, you could do far worse than start with Final Fight.