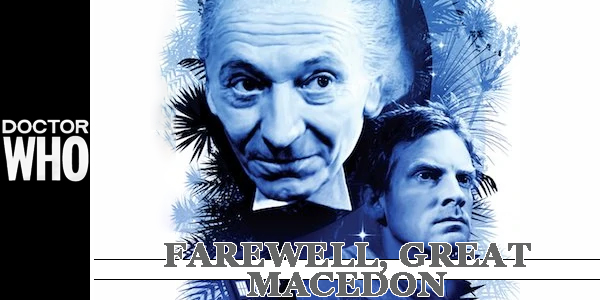 When it comes to lost Doctor Who stories that were actually made, Marco Polo is often held in high regard, and it’s fair to say that Farewell, Great Macedon shares a lot with it. Not just as a historical story, as many Hartnell stories were, but as a longer story with lots of political intrigue, murder (of which our leads are often falsely accused) and a knowledge of history that must not be changed. With just three cast members and six episodes of mostly talking, does Macedon manage to hold your attention? Read on!

The TARDIS materialises in the Hanging Gardens of Babylon, one of the Seven Ancient Wonders of the World, in the year 323 BC. The Doctor, Ian, Barbara and Susan meet Alexander the Great – but their excitement is tempered by the realization that these are the final days of Alexander’s life. As the travellers become embroiled in the tragic events, the inevitability of history unfolds around them. But can they – and should they – change it?

The first of three covers for just this one story! Wow, the opposite problem of releases nowadays…

I know these are Lost Stories one way or another, but unlike some others in the range this story feels more like an actual lost story, as in one that was made but missing (like so many, sadly…) The pacing, characters and big moments match the era so well that you can tell it was conceived at the same time. As each of Alexander’s friends are picked off by the conspirators The Doctor, Ian, Barbara and Susan are accused of the deed, it’s only their friendship with Alexander (John Dorney) that slows it down. As a consequence though The Doctor has to walk across hot coals, which he does with little issue, and Ian is put into an old fashioned wrestling match, which is a shame to only hear about rather than see how that would’ve gone. It all “makes sense” in my head as scenes you would’ve seen in the original season.

Once again it’s the “advanced audiobook” format, so William Russell does his role as Ian as well as The Doctor and a bunch of narration and side characters, Carol Anne Ford does her Susan as well as Barbara, narration and side characters, while John Dorney is Alexander the Great. Dorney is great in the role, and his conversations with the main cast are so well written and acted that it stops what could’ve been a slow listen and turns it into a genuinely enjoyable three-ish hours.

The central idea of “we know this historical figure is about to die, so even though we’ve befriended him, we have to let it happen” is good. I mean it’s been done before, but never quite like this. There wasn’t any attempt to save him, to change history, just a lot of sadness that they have to witness it. Seleucus, the man to do in Alexander (and establish the Seleucid Empire!) isn’t a hand rubbing evil villain either, and in fact history plays out accordingly and he kills Alexander and runs off, with nobody any the wiser (well, nobody who didn’t already know, anyway…) so nothing was changed to give any kind of happier ending.

Alexander The Great appears on two of the three covers… well, all three if you count a statue, I guess…

Much like the previous stories I’ve covered, I did find Carole Anne Ford’s Barbara a bit too close to Susan, and generally I didn’t feel she gave the other voices enough of a difference in some scenes.

While I enjoyed the full six episodes, there were times when I smirked over another scene of The Doctor and co. being accused to the shock of everyone. It matches the time period and everything, but it did get a little silly… 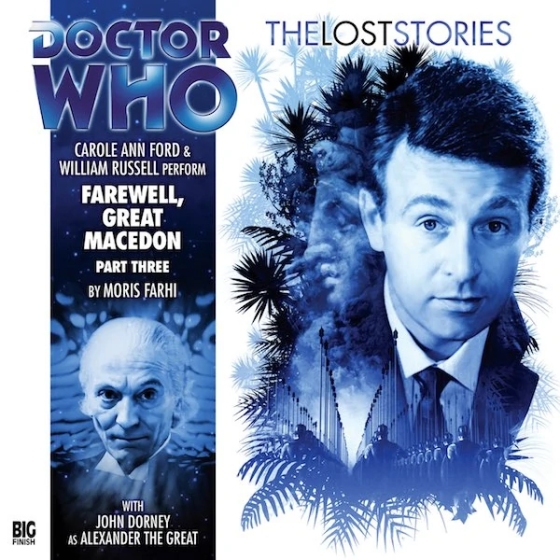 Actually I said statue, but is that a coin zoomed in?

Other than several name drops of Alexander by future Doctors in many stories (often written as a jokey name drop rather than actually referencing this story, but it still works!) there isn’t much. In “official” timeline order this happens after “The Fragile Yellow Arc of Fragrance” and before “The Masters of Luxor”, which does keep the sci-fi – historical – sci-fi pattern the original series had!

One more look at the overall box set cover, because… why not?

Farewell, Great Macedon is a great story with fun scenes, a sharp script and is generally well paced. You might want to split it over a couple of days as I think all three hours in a row will make it drag (I think that’s why I liked it more this time round, I wasn’t too high on it back when it was released) but otherwise this is one of the true standouts in the Lost Stories range, and really does feel like a piece of work from the era.