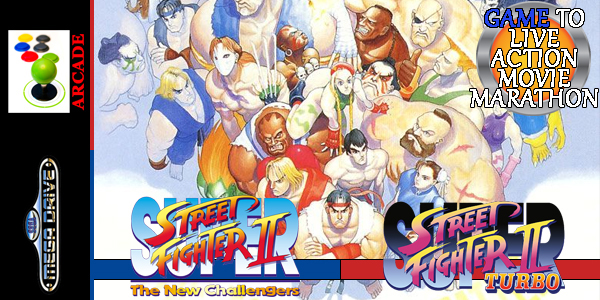 So back in the “Countdown to Smash Ultimate” I covered the first three versions of Street Fighter II, and with the first SF film I looked at the first SF game, so to take the sting off of “Legend of the Chun-Li” I thought I’d look at the only version of SFII I actually owned back in the day: Super Street Fighter II on the Mega Drive, and then I thought “why not?” and threw in the Arcade Super Turbo in as well, as I technically own it on the Capcom Classics Collection Vol. 2 for the PS2 (though I played a MAME emulation for this as I hear the PS2 port is glitchy). So let’s take a look at the final vers- Oh, right. Well, let’s take a look at the final versions of SFII that were released in the 90s…

Super Street Fighter II was released in Arcades in September 1993 in Japan and the US, and November 1993 for Europe. The SNES and Mega Drive ports were released in June 94 in Japan, July 94 in the US, and August 94 in Europe. It also had ports for a couple of Japan-only computer systems in 94 and for the Amiga and PC in 95.

Super introduced four new fighters alongside the regular cast: Cammy, a British Special Forces Agent, Fei Long, the first (of many) Bruce Lee-a-like fighting game characters, at least I think he was the first, T. Hawk, a stereotypical Native American type (though his native tribe is in Mexico, which is a little different?) and Dee Jay, a dancing fighter from Jamaica who… is also a stereotype, but a more fun one?

Super Street Fighter II Turbo was released in Arcades in February 1994 worldwide, and beyond a port to the less-than-successful 3DO in November 94 and a PC port in 1995, it wasn’t ever widely released for home markets for many years. There was an Amiga port in 1995 (which by being an Amiga game means it was UK/Europe only) and a Japan only Dreamcast port in December 2000, but that was it until the Game Boy Advance version, which was released in July, October and November 2001 in Japan, the US and Europe, respectively.

Since then Super Turbo has been released as a part of multiple compilations, and served as the base for several sequels released long after this generation of hardware faded away…

The only character new to the Super Turbo version is Akuma, but safe to say he made a big impression!

Dee Jay… Wait a minute! He likes music, his name is Dee Jay… I GET IT! (Arcade)

Regular Super isn’t too far removed from what came before, beyond the four new characters obviously. Three levels of strength for punches and kicks, pull back to block, crouch (and do a crouching kick or punch), jump (and do a jumping kick or punch) and put in various iconic commands to do special moves, from the quarter turn then punch for the hadoken, to the full 360 rotation of Zangief’s piledrivers. Matches are won by reducing your opponent’s health bar, and it’s normally best two out of three rounds. Sadly Super SF decreased the speed to pre-Turbo levels, for some reason.

New to Super is the choice of several colour pallets for each character, a little tracker appearing on screen for multiple hit combos or first attacks and a Tournament Mode where up to eight players can fight in a single elimination tournament, plus a few graphical improvements. The first two are now staples of the genre, showing that Street Fighter II continued to innovate. The SNES/MD versions added a Group Battle (later more commonly known as “Team Battle”), Time Challenge and a new version of Arcade Mode (called “Super Battle Mode” in this version) where you fight all the fighters before the boss four rather than just a random 8.

Super Street Fighter II Turbo’s biggest addition is the inclusion of a Super Meter that you can build up over the course of the match and then unleash a Super Move with a bit more of a longer input combination. This is once again something all future 2D fighters copied in one form or another (although to be fair, the first Samurai Showdown game, released before this, had a meter at the bottom, though it filled up as you took damage rather than dealt it, and there were no Super Moves, it just made you faster and stronger when activated).

It also brought back the faster speed (and made it selectable) and improved or added moves, animations and voice samples, that sort of thing. It’s the go-to game if you want to play the original Street Fighter II series, and is often still played in eSports tournaments even after all this time.

T. Hawk gets welcomed to the party, pal. (Die Hard reference? What am I going on about…?) (Mega Drive)

Between the two versions there are nice, chunky sprites, pleasing HUD, interactive backgrounds… it’s not a huge leap from the original SFII games, but it is improved. Super Turbo especially has more fluid animations and nicer artwork in the HUDs and post-match screens. The Mega Drive version of Super is obviously a bit blockier and low rez, the backgrounds being clearly worse and the action having black borders at the top and bottom of the screen. I’ll mention that the SNES version has the blood removed from the post-match pictures, but that’s 90s Nintendo for you!

Sound is good across both games, the background music is of course iconic, the soundeffects are pleasing to the ear, and the little bit of voiceover work is good. The MD Super is obviously worse in this department (especially the background music) but it does retain a lot of the voiceovers, something you can’t say about the SNES version… I’m not anti-SNES by the way, it just happens to have an inferior version of Super! 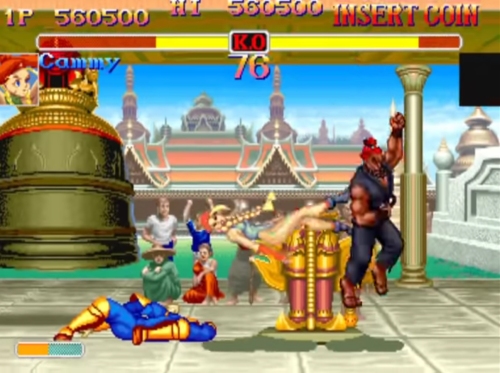 Cammy get’s hit towards the “corpse” of the man who tormented her. (Arcade)

To quote myself from the last review: “Although later sequels and prequels would add several elements of story to the events of this game, as it stands it’s just simply you chose a character and he goes through a street fighting “tournament” and eventually takes out dictator M. Bison. Anything more significant is added later, retroactively.”

For the record, one of the things added retroactively is Akuma killing M. Bison, something only relevant to talk about now as he was only added in to Super Turbo! (also something that was later retconned, but whatever…)

Cammy also getting hit, this time on her own stage… I don’t have a thing against her, honest! (Mega Drive)

After playing Turbo on the SNES with my brother, I was thrilled to have my own copy, and with four new characters no less! I saw it on Bad Influence (British gaming TV show from the early-to-mid 90s) and was thrilled to eventually add it to my collection. I mean, I was still really… really bad at it, but still! I had a copy of Street Fighter II and it was better than my brother’s, that was the main thing…

Geez, I know there are a lot of Bruce Lee clones in games, but this is ridiculous! (Arcade)

Certainly playing the MD Super was nostalgic, it also sounds extremely off and is back to being slow and annoying. So I’d avoid that… Super Turbo on the other hand was fun, turning the speed up made it a lot more fun to play. Still rock hard, mind you, but liveable difficult, rather than throwing controller difficult.