WWF Attitude was quite the big deal when it came out, to me it was mostly because it actually had a career mode with a calendar screen, house shows, the works. I was really excited, and thankfully I wasn’t disappointed, and the create-a-wrestler suite was amazing (at the time) to top things off. I’ll admit the Dreamcast version, which did have improved graphics, is only in my collection because it came with the console, but I did play it a bit, and used it for the purposes of this review, meaning I probably played the Dreamcast version more in 2020 than I did in 1999/2000… Anyway, let’s take a look! 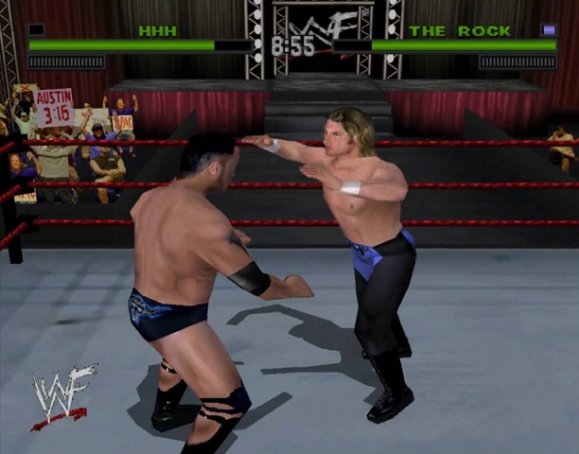 Mid-carders Triple H and The Rock do battle. I wonder if they’ll ever amount to anything?

WWF Attitude was released in June 1999 for the PS1 and Gameboy Colour (yeah, let’s not talk about that version…) and in July 1999 for the N64 (or August in Europe, the only date significantly different). The Dreamcast version came out in November, and oddly removes the dedication to the memory of Owen Hart the other versions have…

It includes Steve Austin, The Rock, The Undertaker, Triple H, Mankind (with Dude Love and Cactus Jack alts), Shawn Michaels, Ken Shamrock, Kane, Owen Hart, Faarooq, Jeff Jarrett, Goldust, The Big Bossman, X-Pac (first appearance in the gimmick, appeared as 123 Kid and Syxx previously), The Godfather (first appearance in the gimmick, but previously appeared as Papa Shango…) Mosh, Thrasher, Marc Mero (making his first and only appearance in that gimmick), Sgt. Slaughter (in a suit…), Jacqueline, and “Dr. Death” Steve Williams (who had appeared in the NES WCW game previously…) 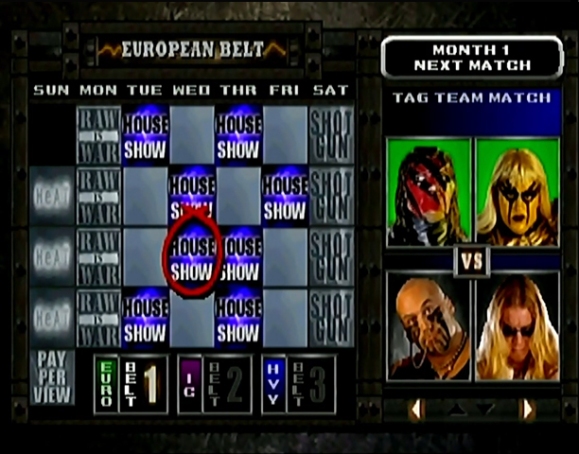 Who remembers Shotgun Saturday? … No? Oh okay, carrying on then…

The gameplay is pretty much untouched from War Zone. Press a sequence of directions followed by a face button to do a move (Left, Right, Up, Triangle to do a powerbomb, that sort of thing), you can also grapple and then do a similar sequence to do a grapple move. You can strike, running strike, do top rope moves, diving moves, ground moves, the usual works. It also uses the same multiple lifebar system where a character starts with a green health bar, when it depletes they go into “Stun”, then it changes colour, with each colour change the stun lasts longer, when you reach the red health bar you’re able to hit (or bit hit by) a finisher and potentially pinned. Also carried across is you getting power modifiers if you do lots of different moves and get the crowd to cheer for you, and likewise do the same move over and over and you’ll be depowered while the crowd boos you. So yeah, pretty much identical to its predecessor, though there are a greater variety of moves, I’ll give it that much. They also went a bit crazy with the blood, as it can not only appear on people’s heads, but on their backs as well in the form of weird scratch marks… even if they’re wearing tops!

Thankfully the game engine was the only thing that wasn’t really improved. The match types have been greatly increased, giving us access to Singles, Tag, Handicap, Triple Threat, Fatal Four Way, Gauntlet and Royal Rumble matches, with additional rules like Hardcore, Cage, Last Man Standing, Falls County Anywhere, Iron Man, 2 Out of 3 Falls, I Quit Match (which is actually just a Submission match…) and two game exclusive match types of “Toughman Match”, which is just a handicap match but you have to pin both or all three of your opponents rather than just the one, and “Finisher Only”, which as you imagine means the first person to hit a finisher wins. It makes for some fun combinations, though there are still some modes, like Royal Rumble, that remain unable to have its rules modded.

As I mentioned in the opening paragraph, there is a career mode this time round, rather than just a MK style ladder. You pick your character and start off working non-televised House Shows, then begin to appear on RAW, then RAW and PPVs, all slowly working your way towards the European title, then Intercontinental title, then finally the WWF Title itself, which you can get a quicker shot at if you win the Royal Rumble. It’s really fun and gives you a sense of progression, though it does feel a bit empty after a while, and it ends as a soon as you win the WWF title with no chance of defending it, let alone continuing your career.

The biggest improvements come from the Create suites. Create-A-Wrestler is back and better than ever, giving players the ability to edit facial features, body types, far more clothing options, you can actually pick specific moves rather than only an existing moveset, and there are CAW only callnames and entrance music to pick from (so many of which are forever engrained in mine and my friends’ memories). It’s great, and was the first big step towards the crazy deep CAW modes we got later. Newly added is Create-A-Stable, where you can group several wrestlers together for entrance and interference purposes, and Create-A-PPV, where you can not only set up a series of matches in a card to play, but also customise the whole arena, playing with lighting, rope colours, apron designs, the lot. It’s something we wouldn’t see in a mainline WWF/E game again until many years later.

He’s a legend in Japan! … but not so much in the WWF/E’s history.

Graphics on the PS1 are much like War Zone, the ring and wrestlers are fine, the crowd looks a bit crap, and everyone has standing animations that make them look like robots. The Dreamcast version has a better polygon count and better lighting engine, making the arena and wrestlers look brighter and more detailed, plus the crowd looks far better. The animations are still robotic and janky though!

Sound is good, the crowd sounds are fine, though again the individual voice shouts are weird, and the entrance music is all present and accounted for, which is good because you actually get proper entrances this time! The commentary from Shane McMahon and Jerry Lawler is still obviously limited to a few reactionary comments and basic move calling, but it could be worse for the time. Every wrestler once again voices their own grunts and groans and it once again sounds weird. They do pre-match taunts as well, which are often hilarious (even if they weren’t meant to be). There are custom voice tracks to match up with the custom callnames and entrance music mentioned in the CAW section as well, complete with their own pre-match taunts.

Damn, deeps cuts to the chest and back during this one! Which is odd given it’s a regular match…?

I loved this game when it came out, creating wrestlers and arenas, playing through career mode, and mostly having a laugh with mates. Once again the fun only stopped at Christmas that year, when I got my hands of the AKI engine-led WrestleMania 2000, because, at the end of the day, the Acclaim War Zone engine just… isn’t that fun.

Mark Henry makes his first of many… many… MANY appearances.

Well, as I just mentioned above, the Acclaim War Zone Engine isn’t very fun, and it’s even less so now. The slow, clunky nature is really showing, especially as nostalgia for the gameplay is out of the way after coming back to War Zone a month or so ago. The modes are still well done, the create-a-wrestler and PPV (a.k.a. Arena) modes are still impressive enough, and I enjoyed it for an hour or two of career mode (as well as listening to the old songs and voice tracks…) but it doesn’t hold up well in 2020. Still, at least the final Acclaim WWF game was a good one, retrospectively, because the last Acclaim wrestling game in general was… not.