Despite me and my brother playing games at home together all the time way back when, I think The Simpsons is the only one I remember us playing together at the Arcades, somewhere in Skegness or some other near-local English beach. It’s also one of the few times I remember a tie-in game being not only good, but great! Factor in the weird fact that this game has never really been ported to home consoles (at least, not for long…) and The Simpsons Arcade Game is a bit of an oddity, but a damn good one. Let’s take a look! 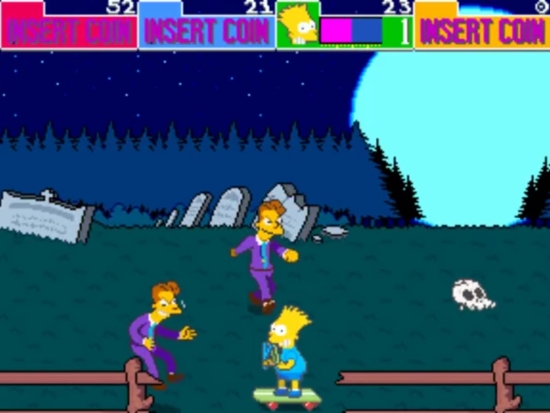 Bart still in his skateboard and slingshot phase. Classic!

The Simpsons came to Arcades in 1991, both with a two-player cabinet and a four-player cabinet option for Arcade owners to pick from. I specifically remember the four-player one is the one I played on (… with one other player…) It was the first game based on the popular franchise (in 1991 it was just hitting the start of its major peak) and boy, it delivered.

The game was ported to the Commodore 64 and PC in 1991, but I have no idea how they hold up because it’s hard to get any info on them. Beyond that the only other port was a digital-only “HD” port for the XBOX 360 and PS3 in 2012, but that was taken down within a year for reasons unknown, never to be seen again…

Homer showing his boxing skills before the classic episode even aired! (not that he had any actual boxing skills in the episode, mind you…)

The gameplay is your standard scrolling beat ‘em up of the time: you move to the right of the screen, you have two buttons: one jumps, the other attacks, and you can a jumping attack. There aren’t any screen-clearing or health-damaging super moves, but if you and a second player are near each other you can do tandem attacks that often hit multiple foes at once. You can select between four characters: Homer (uses his fists), Marge (uses a hoover), Bart (uses his skateboard) and Lisa (uses a skipping rope), so each one has a different feeling moveset. Of course, you also have pick-ups that restore health, as well as weapons to use, though in this case they’re very Simpsons-y, like bowling balls and mailboxes.

That’s the gist of the gameplay anyway, but it’s very satisfying to play. The controls are tight and the action has real oomph behind it. There are mini-games in between some levels where you have to tap the buttons really hard to fill up a balloon or the like, which is … sort of fun, I guess. Each level has an end boss as well, and everything looks just like the show. It’s perfect.

Funnily enough, it has quite a few of the scrolling beat ’em clichés going for it, including a lift stage, ninjas and a pro-wrestling based boss, plus rescuing a kidnapped love one as motivation! 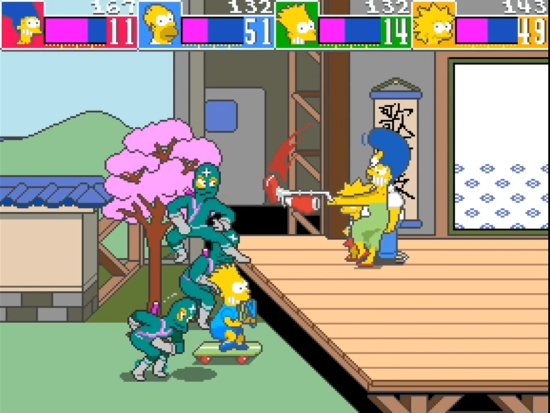 A (bad due to three characters being layered on top of each other) example of the four-player mode. I did my best…

As I just mentioned in the Gameplay, the graphics looks just like the show, with chunky sprites and great animation. The backgrounds are all bright and full of characters and in-jokes too. Rarely does a movie or TV Show tie-in nail it as much as this does.

The sound is also handled perfectly. The opening of the show is the opening of the game, there’s little animations and partially voiced cutscenes to start with, and all the characters make grunts and one-liners straight from the original cast. Background music is fitting too. The whole presentation is frankly… *makes chef kissing motion*

The Simpsons look on in terror as Maggie is kidnapped… you know, instead of going after her.

The Simpsons literally bump into Smithers fresh off of stealing a large diamond for Mr. Burns (for some reason…) and the diamond switches place with Maggie’s dummy, and rather than do something about it, he decides to kidnap Maggie along with the diamond. This leaves Homer, Marge, Bart and Lisa to travel across Springfield fighting the unusually aggressive and similar looking residents until they reach Mr. Burns, who is piloting a killer robot.

After Burns’ defeat the family of five leave together, Homer tossing the shiny object his daughter was playing with away as they walk…

I was blown away by the Arcade Game when me and Billy played it on holiday. The graphics and sound were just like the show, and it was really fun to boot! I was gutted it never came to home consoles, and frankly it was one of the first games I downloaded when I found out about MAME and Arcade ROMs in the mid-2000s.

You know, nearly three decades later (Jesus…) I’m still blown away by this game. The graphics are still perfect, the sound is spot on and it’s still really fun to play. How is it that pretty much every other attempt to turn a TV show or film into a game has come off so average, or completely crap? Oh well… If only this got a proper release again, I could enjoy it without having to load up an emulator…

One thought on “The Simpsons – The Arcade Game Review”